The Garden of Empress Cassia – US edition 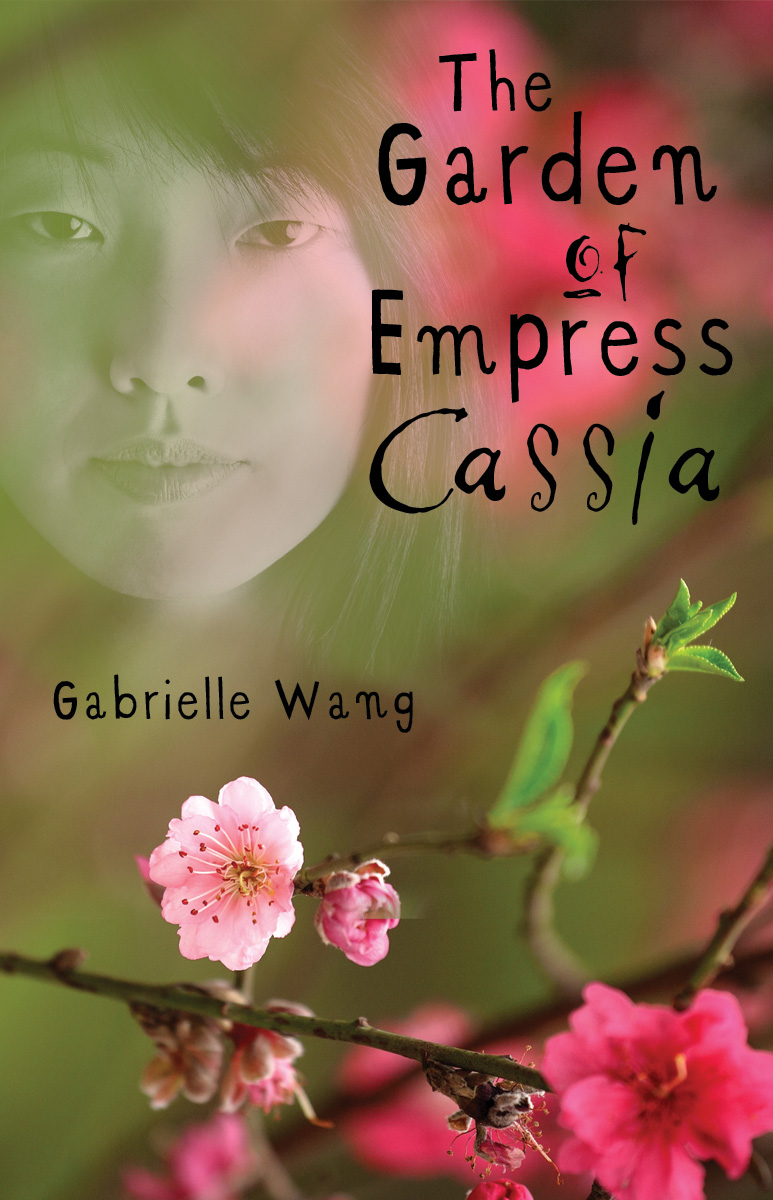 And as an audio book by Bolinda www.bolinda.com

Mimi laid the box on the bench and opened it carefully. Inside were rows and rows of coloured pastels that shimmered in the light. She rolled them under her fingertips and her imagination began to fill with amazing pictures.

When Mimi is given a box of magical pastels, she discovers that she can draw the Garden of Empress Cassia, a drawing so beautiful and real that people are transported inside it. But the pastels are ancient, mysterious and powerful, and in the wrong hands can be very dangerous. 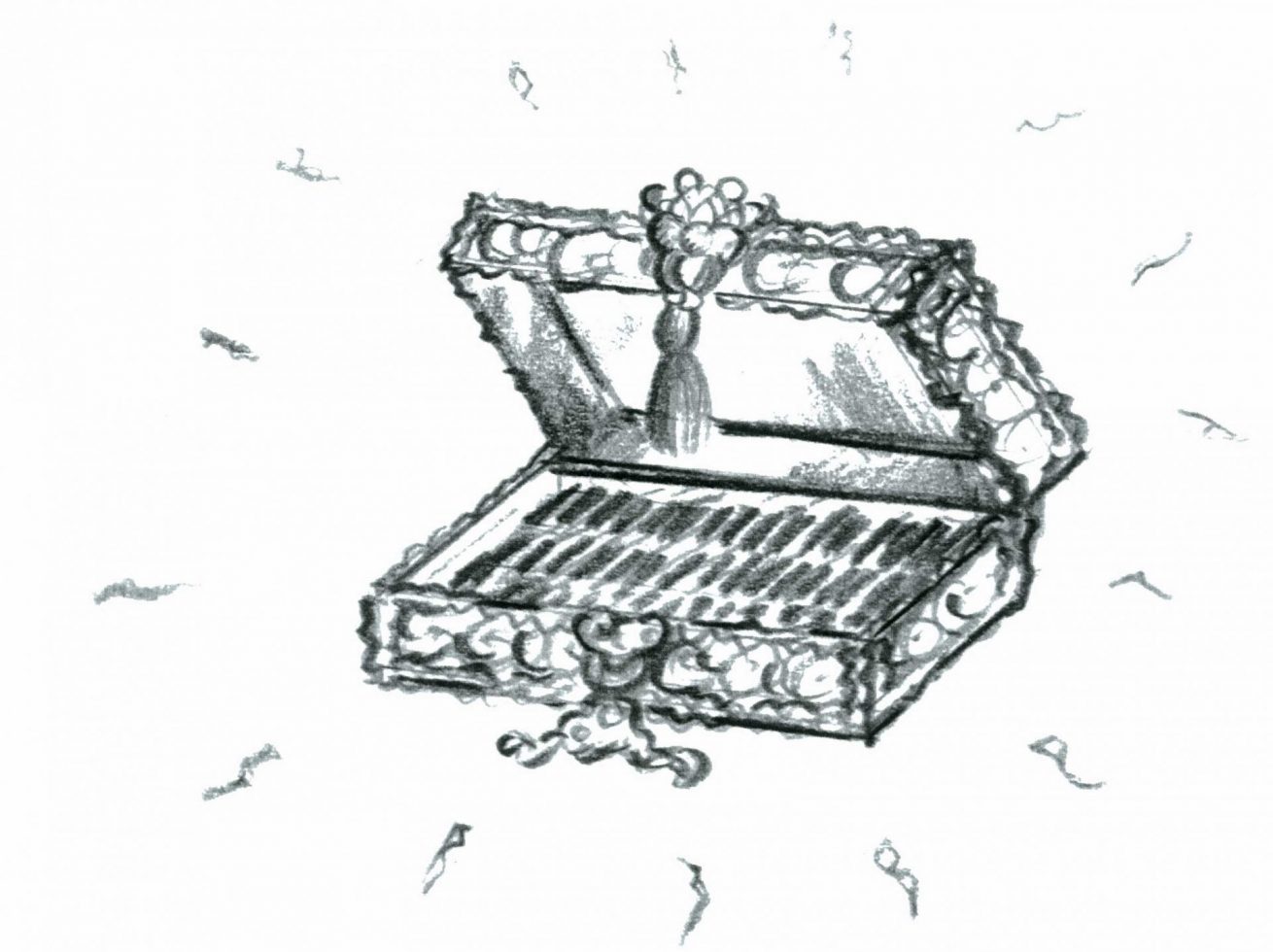 Background
The Garden of Empress Cassia is loosely based on my childhood. Like Mimi, I lived on top of a shop and loved to draw. And like Mimi, I felt ashamed of being Chinese.

The idea for the book started out as a dream. When I woke up I wrote my dream down and as I wrote, memories of my childhood came flooding back to me. I remembered my mother’s gold lacquer box where she used to keep her pearls, and I remembered the shop we used to live in, filled with fascinating things from China- finely embroidered white handkerchiefs, miniature carved cork landscapes, embroidered slippers, laughing Buddhas. In between customers, my mother would sit in the corner, the gold lacquer box the size of a biscuit tin on her lap, threading pearls to make necklaces. It was a very clever box. The wooden walls slid in and out of each other so that you could make the compartments any size you wanted. One compartment held glistening white pearls, another fine silk thread, and another, little gold coils for attaching the clasps. On the lid of the box was carved a lake with willows, bridges and pavilions. For me it was a magic box.

“At school, 12-year-old Mimi Lu is better known as Smelly-Loo because her parents forced her to drink all sorts of smelly brews concocted by her herbalist doctor father that lingered on her clothes, pigtails, skin, and even her breath. You are Chinese. Be proud of it, her immigrant parents remind her, and yet she defiantly insists, “I’m Australian, not Chinese.”

Gifted in art, Mimi receives special lessons from her favorite teacher, Miss O’Dell. But Dr. Lu forbids Mimi from wasting any more time and insists she concentrate on schoolwork. Mimi is devastated, until Miss O’Dell comes up with a compromise plan to work with Mimi during lunch, which also gives Mimi the perfect excuse to stay away from bullying Gemma and her ‘cool’ group.

Miss O’Dell gives Mimi a special set of beautiful Empress Cassia pastels with a mysterious warning, ‘No one is to use the colored pastels but you’. That Saturday, Mimi creates a magical sidewalk scene that invites viewers to experience something unusual and healing. The pastels, Mimi quickly realizes, have otherworldly powers.

As more and more people gather to experience the garden, Mimi’s mother decides that she’ll open a tea and dumpling shop right there on the sidewalk to provide refreshments. Mimi is suddenly famous in the little town, and her mother’s new venture becomes quite the happy, welcoming gathering place. But when mean girl Gemma figures out the power of the pastels, can Mimi stop her before Gemma’s wickedness changes the magic into something dark and dangerous?

In just under a hundred pages, third-generation Australian Chinese author, Gabrielle Wang, melds history and life lessons into an exciting adventure. She deftly inserts difficult events as vast as the Cultural Revolution (Mimi’s mother’s childhood), as personal as degrees of cultural assimilation among different generations of immigrants (Mimi and her parents), and as familiar as opposing sibling dynamics (Mimi’s strict father and his ill younger brother). Wang realistically presents today’s challenges at school without easy fixes, from cliques to culture clashes to burgeoning boy/girl dynamics. And through it all, she’s got just the right balance to tell a really good, lasting story. That’s a feat of welcome magic indeed.”

The Garden of Empress Cassia is about an unpopular, new girl named Mimi Lu. At school, she excels in art. Because of this, her teacher gives her a box of pastels that turns out to be more than they seem. She draws beautiful pictures on the stones and one day, she creates The Garden of Empress Cassia. This drawing is so powerful, that it has the ability to suck people inside of it and release them as a new person. They don’t even remember what has happened! But Mimi has to be careful because the pastels are “A Treasure for Some / A Curse for Others.” She especially had to protect them from Gemma, a girl at school who is bullying her, and who wants the pastels in order to stop Mimi’s gaining popularity.

The Garden of Empress Cassia is very interesting in multiple ways. I’m especially a fan of art, so the book is inspiring. I feel that the quote “A Treasure for Some / A Curse for Others” really explains that only polite people are treated respectfully, while bullies might not be respected by others. This book shows that although people are equal and should be treated that way, each person is unique in some way. Mimi is as much of a person as Gemma, but Gemma is jealous because of her artistic talent. This book also inspires readers that as long as you have the material, anything can come from your artwork. This really shows the power of creativity.

The Garden of Empress Cassia will appeal to people who may be shy, new, or unpopular because it shows that the inner you is what really matters. Also, this book is very inspirational to creative people. It shows the true value of artwork and emphasizes that the value something or someone has is the inner beauty, not what there is to be seen on the outside.”

“Mimi Lu doesn’t like being Chinese in Australia. She doesn’t like being different from the kids at school, and doesn’t like being called “Smelly-Lou” (who would?). She’s teased and bullied for her difference, and on top of that, her parents want her to focus on getting good grades when what she wants to do is draw pictures. Her art teacher at school is sympathetic and lets Mimi have extra classes at lunchtime. And then she gives Mimi a set of “Empress Cassia pastels”. Mimi’s draws the Garden of Empress Cassia outside her parent’s Herbal Medicine shop, and all sorts of things begin to change. Mimi is a *wonderful* character, a totally believable eleven-or-so year old girl; her friend Josh is also marvelous. I was a little uncomfortable with Old Ma and his “very wise very old Chinese man” sort of role. But I did love the book overall, and the ending is terribly, wonderfully gripping.Wang is third generation Chinese Australian. The Garden of Empress Cassia was her first novel, and Mimi is very much based on Wang herself as a child. I was also interested by the ways in which this book can be read as a meditation on cultural appropriation. Which is perhaps better left for a discussion with others who have also read the book.” 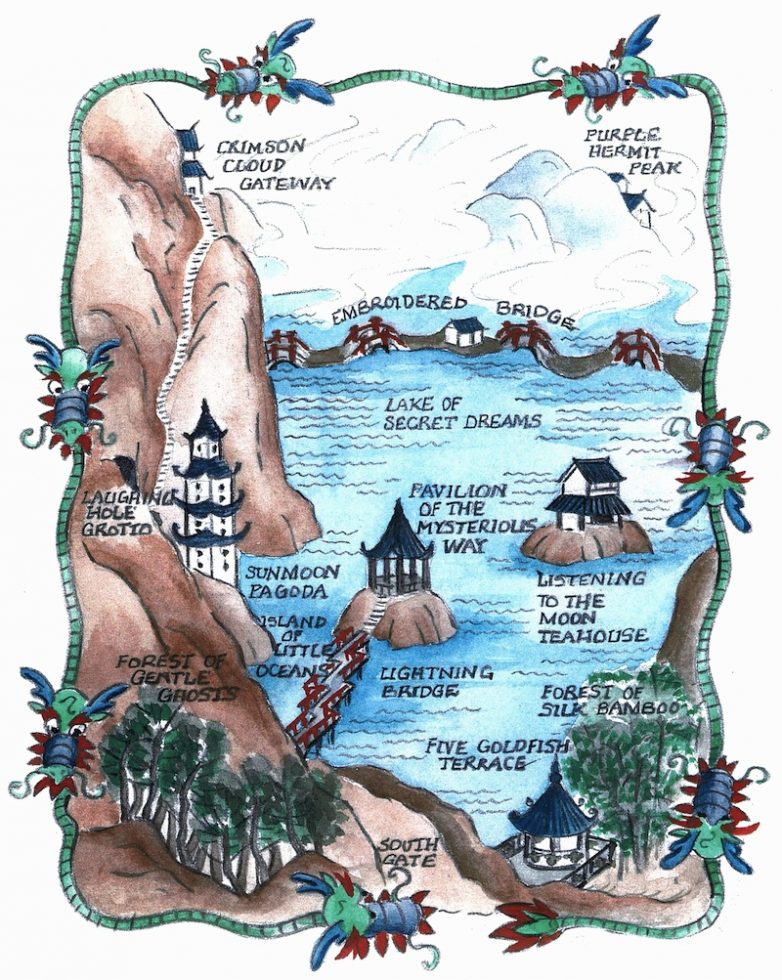