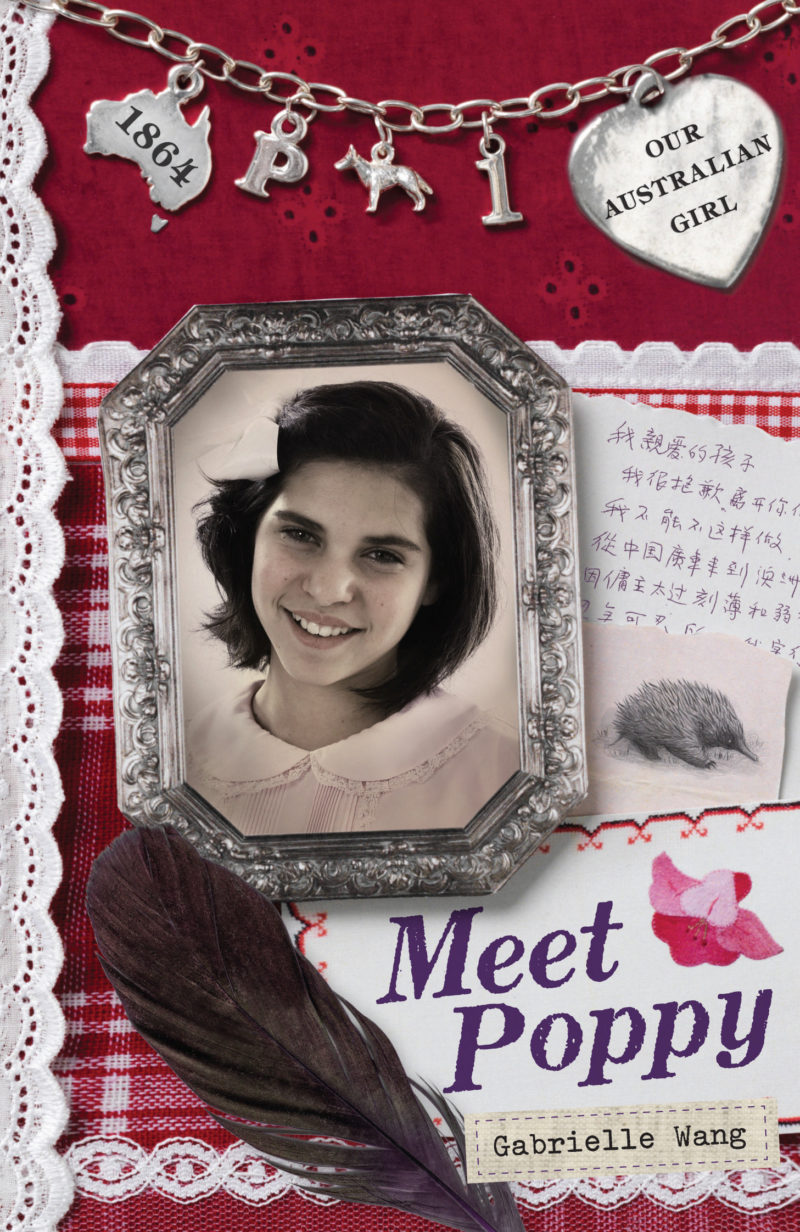 These books are a fantastic way to make history fun and accessible, as well as being a lovely introduction to the genre of historical fiction for young readers.”

“My name is Siobhan and I am in year 6. I wanted to tell you that I love the Poppy books! They are amazing! I really want to read your other books!”

“This was a great book!!!! I mean I just loved it! It was a story of love and hope and I think it was really cool that she had the courage to go out, on her own, and travel far and wide just to get to her brother.

“In 1864, life for a half-Aboriginal, half-Chinese orphan would have been tough. In this time of racism, immigration, hardship and the Gold Rush in Victoria, times were hard and expectations high. Wang gives us a glimpse into what this girl’s life might have been like.

These books are a fantastic way to make history fun and accessible, as well as being a lovely introduction to the genre of historical fiction for young readers.”~ Kids’ Book Review

“This was a great book!!!! I mean I just loved it! It was a story of love and hope and I think it was really cool that she had the courage to go out, on her own, and travel far and wide just to get to her brother. When she makes the escape, she comes across many people but luckily her disguise keeps her safe. During her escape to find her brother, she comes across many emotion filled events and is taught how to live on the run. I would definitely recommend this book to any of my friends who were looking for a short but emotion filled read. So if you haven’t read this book, I would recommend picking it up now and just enjoying the sweetness of young Poppy.”~ Indi

“My name is Siobhan and I am in year 6. I wanted to tell you that I love the Poppy books! They are amazing! I really want to read your other books!”~ Siobhan

“I knew from early on that I was going to love Poppy. Not only does she embody Gabrielle’s background in the Chinese Ancestry that I get the feelings she (Gabrielle) has always had to defend from idiots who think her connection with Australia can’t possibly be as old as it is, but then there’s Poppy’s Indigenous heritage, and her connection to the peoples from the very area that I’ve live in since I was nine: this is the country in which I learned to know about the country’s people; and to have Beechworth as the focus of Poppy’s goal, even though we never see Beechworth itself, it’s got the potential to have such a clash of cultures about it. It’s actually something I want to keep thinking about in terms of this series of books, and I’ll be interested to discover where it’s going.”~Heidi

A fantastic story for your middle years. It highlights the injustice and prejudice that children of mixed race faced in the late 1800’s, and one girls determination to find her brother and the truth about her father. This is the first of four stories about a Gold Rush girl who dreams of a better life. We are sure your students will be eagerly awaiting the next book.~ Lamont Books

MEET POPPY is the first in a series of four novels about an 11 year old Aboriginal girl. Poppy (Kalinya) and her brother Gus (Moyhu) live on Bird Creek Mission near Echuca in the colony of Victoria. The year is 1864. Poppy’s Aboriginal mother died

when she was a baby, and her Chinese father disappeared before she was born. When Gus runs away to look for gold, Poppy decides to follow.

Thank you to Yullarah for being the face of Poppy. Her beautiful face appears on all the covers. She has been an inspiration to me while I worked on the series.

I am privileged also to have the help of three wonderful advisers, Koorie Elder, Uncle John Sandy Atkinson, Maxine Briggs, Koorie Liason Officer for the State Library of Victoria and Judy Williams, Koorie Heritage Trust Librarian. Without these people these four novels would never have been written. (January 29th 2011)

Take a look at the official website for Our Australian Girl. There is information and competitions, puzzles and a quiz.

During the 1850’s and 60’s, more than a third of the world’s gold was found in Victoria. This brought many people from all over the world and began the period in Australian history known as the Gold Rush.

The Welcome Stranger was the name given to the largest alluvial gold nugget found in the world. On 5th February 1869 in Moliagul, Victoria, a man called John Deason was digging around a tree when he struck something solid at the base. Confound it, I’ve broken my pick, he cursed. When he looked down he saw, sticking up out of the ground like a boulder on a hill, a huge nugget of gold. It measured 61 cm by 31 cm. Almost too heavy to lift, Deason and his friend Richard Oates took it by dray to Deason’s house. It weighed 72 kg. Later they took it to Dunolly to the London Chartered Bank where it was cut down for smelting. It took Archie Walls, the local blacksmith, five hours to reduce the huge lump of pure gold into maneagable pieces. It’s value in 1869 was 9210 pounds or $3,000,000! 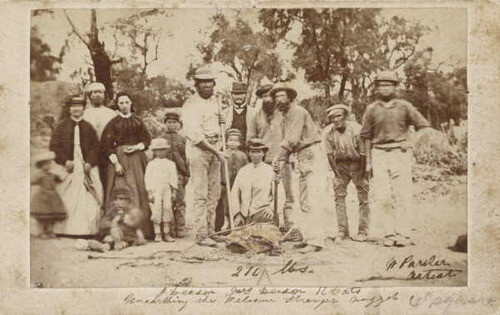 Among the different nationalities, around 40,000 Chinese men came to the Victorian goldfields and one of these was my great grandfather, Jimmy Ah Kew Chen. He came to Australia from Guangzhou when he was 18 years old and settled in Wahgunyah on the Murray River. My family doesn’t know what he did when he first arrived but later on he cleared land around Wahgunyah for the wineries which still exist today. My great grandfather didn’t get married until he was in his 50’s. My great grandmother had never met Jimmy Ah Kew before. The marriage was arranged by a matchmaker as was the custom in China in those days. You will meet Jimmy and his bride later in the third Poppy book called Poppy and the Thief.

For more information about the Chinese and why they came to Australia you can go to the Chinese Museum’s website. Or if you are in Melbourne, visit the museum in person. It also provides school tours and workshops for children.

The Indigenous Population and the Missions

While the immigrant population grew, the Indigenous population diminished rapidly. Before 1834, around 100,000 Aboriginal people lived in Victoria. By 1860, with the influx of the white settlers and the discovery of gold, this number had fallen to less than 2000.

The following extract is from Mission Voices:

Since the invasion of Koorie lands by European settlers in the 1830s, successive Colonial and State Governments have sought to civilise and control Aboriginal people of south-eastern Australia.As early colonists took over large tracts of land for farming, local Aboriginal people were pushed to the edge of survival as the natural resources they relied upon in order to live were depleted and fouled by livestock and agriculture. The fight over land led to battles, wars and massacres where Koorie people often came off second best when confronted with the more effective weaponry of the Europeans.

In Victoria the Government supported the establishment of thirty-four Aboriginal missions and reserves, while over two hundred existed across Australia. Some of these sites lasted many years, while others closed soon after their formation. The Victorian Government strictly controlled life on the missions and reserves through an Aborigines Protection Board based in Melbourne. Board members were kept informed of events throughout the colony by honorary correspondents and regional committees.

Mission Voices retrieved 30th January 2011. This is a great website for information about the Indigenous population at the time of white settlement.

Other websites worth taking a look at are:

Map of Victoria created in 1862 While researching, I found this very interesting map. I loved searching for the places I know to see whether they still existed today or if their names had changed.