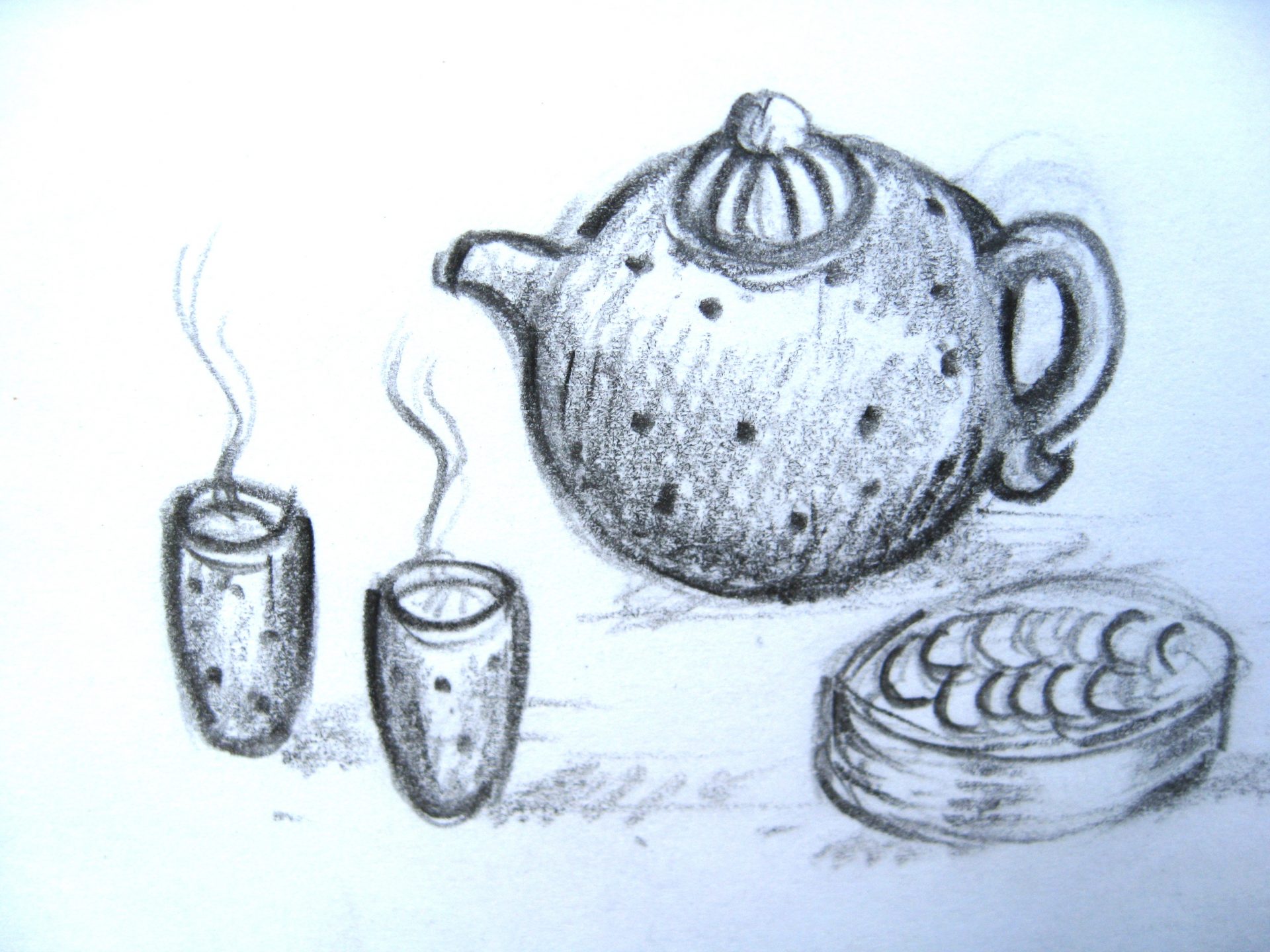 Within the home, the serving of food was subtly geared to the status of the person in the family. The killing of a chicken was an event. In a household of perhaps two or three dozen people, only the more important and elderly people, or a visitor, were privileged to eat it.
Favours and gifts and insults were expressed gastronomically. A visiting relative from afar who returned to be given vegetable soup, with not a piece of meat in sight, would think he had been insulted, or that the family was acting poverty-stricken in order to prepare him for a small loan.

I have been thinking about yumcha, Ante Babic said one day as we sat at our favourite tea house.

Oh yes? I said warily; Antes ruminations can sometimes be quite disturbing.

Yes, he said. Its not just about good food and indifferent tea, you know. I have come to the conclusion that yumcha  which by the way the Americans call dim-sum, did you know that? — is a secret training system developed by the Chinese 

Oh, you must be  I started to expostulate.

No, dont interrupt, he insisted. Listen. Im convinced that it is a secret training system for essential life skills that Chinese  well, all of us, really  have to learn to get by and prosper in the world.

And you think we Chinese deliberately developed this, this  training system for what? Our kids? I dont know why I was surprised; Ante usually has a conspiracy theory on the boil about something.

Well, anyone; he said. And it didnt have to be consciously developed; it could just have grown out of the basic spirit of the Chinese people, sort of an expression of your zeitgeist or 

Never mind about that. Tell me what you mean. What training could you possibly get by lunching in a place where you just select the food from carts being wheeled around the room?! I was getting exasperated  but admittedly a little curious at the same time.

Ante twitched his bushy eyebrows and looked smugly superior for a second before he leaned forward and said in a low conspiratorial tone, Ok  just think about it. Yumcha teaches you all these things:

It’s not what you know, but who you know.

You must maintain constant vigilance.

Its the quick and the dead  delayed decisions are fatal 

Hold it, hold it! I snapped. Stop right there and explain what you mean.

Sure, he smiled. You have to know the right place, since not all yumcha places are equal  some are horrible. If you dont know the right people at the door, you get put in the losers section where the food carts hardly ever go. If you arrive at the wrong time, there is just no food left at all.

Well, thats true enough, I said, looking around. But what about with the right people?

It should be three or a multiple of three people, since all portions come in threes, right? And heaven forbid you should bring a vegetarian to yumcha  what could they eat? It would just ruin your lunch. Ante wolfed down a roast pork bun, leaving a rather macabre spot of red hanging from his moustache, but he continued regardless, fixing me with his eyes to emphasize the importance of what he was saying.

Learning to maintain Constant Vigilance is crucial. Let your attention slip for an instant and your favourite item has just flashed by, to be gobbled up by the next table along. While still looking at me, his right hand suddenly thwacked a spoon down hard onto a plate just starting to levitate away from the table, making me jump. He looked over and growled Leave it!!

Turning back to me, he said, There you go. See that? He indicated the retreating back with his chin. If you dont watch constantly, those busboys will whisk away a plate that was only half-finished. I was saving that bit of morsel for later.

He settled himself in and got back to his topic. Your point of view is everything, and you have to choose it deliberately, for your own advantage. What I mean is — he saw I was looking puzzled — pick the right seat. You must be looking in the right direction or you dont even see what choices you might have. It will all pass you by, and youll never know the difference, except that gnawing deep hunger will just get worse and worse.

Yumcha is truly the Arena of the Quick and the Dead, he went on. If you hum and haw and cannot make up your mind within ten seconds about whether you want something, those irascible cart ladies are gone  better fish to fry, you know.

My mind was whirling from his melange of metaphor, but I was hooked, so to speak. But best not show it. Is that all? I sneered. Hardly a full system of life training 

Oh no, he laughed. Theres heaps more. The importance of insider knowledge in life (such as who to book the table with, which table to request, what to order); math and negotiation skills (how to divide three portions into the number of people at your table, and what happens if you cant); and even the principles of good government.

Simple, he replied, stabbing a dumpling he had been chasing around with his chopsticks. Chinese custom when eating out  as you know very well — is that He who Orders has to Pay. Now if that isnt a recipe for good government I dont know what is.

Most importantly, he went on, you have to be Daring! Well, or at least not too precious  to try something unknown. Lots of people imagine what they think something might be, and then react to that instead of seeing what is actually in front of them and trying it. Well, they just tie themselves up from the beginning, and will never get anywhere! he said, pulling a thread of jellyfish from between his teeth.

The idea was growing on me. You know, you may be onto something I said. When I was younger, you never waited at the door to be seated in a yumcha place, you always just picked a table and went to stand behind the people already eating at it, until they got intimidated and left. And if you were the ones sitting down  which eventually you always were  it taught you not to be too easily intimidated, and that you had a right to eat like everyone else, but that there were lots of people in the world, and lots of them were hungry 

Whoah! laughed Ante. I think you are getting it. You see what I mean? There is no way you could teach these skills in a classroom. And that is part of the point: what better stimulus than food to cement in some hard-earned life-learning skills? When we want to cement a friendship or some other relationship, we go out to eat, right? Food makes us more receptive, for better or for worse.

I think Chinese society at least tries to make it for the better, I said. Memories had come flooding back. In the old yumcha places, to mark the number of dishes consumed they used the character zheng4 ? which has five strokes. One stroke per dish, so they would just write the strokes in order until there was a total of five and the whole character appeared. They would then start another character. So they would then just count up the zheng4 characters, plus the remaining orphan strokes, and they would know how many dishes you had taken from the carts. The point is that zheng4 means Righteousness, and here across the bottom of your food bill would be a whole line of them. 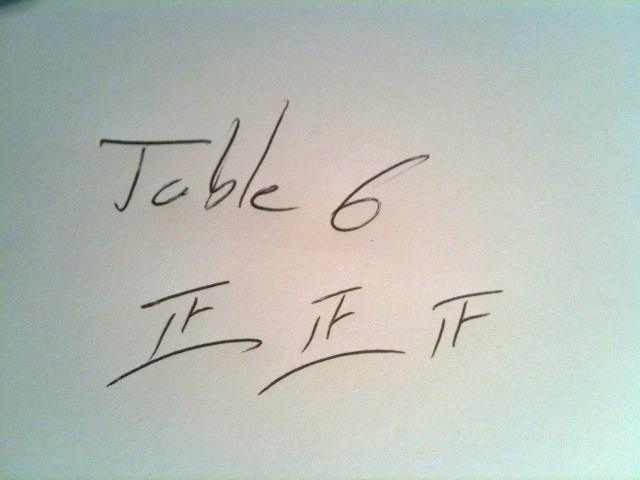 Yep. Subliminal conditioning, Ante agreed. Or maybe they thought with all that righteousness you would be too ashamed to sneak out without paying. It must have been chaos with everyone standing around behind tables full of people eating.

Yes, but we like it that way, I confessed, my eyes misting. Noisy equals liveliness, Life in fact. Who wants to eat someplace that is silent like a tomb?

It would put you off your food, eating in a tomb. But now that I think of it, Antes eyes narrowed as he concentrated, the word for the primordial chaos is hun2 dun4 , isnt it? Exactly the same sound as the word for Wonton, as in Wonton soup. So that soup enshrines the early Chinese view of the universe: utter chaos until someone comes along and imposes order on it, by eating their way into it.

That was it. I was sold, convinced. Ante had really tapped into something here, a  deep well of cultural wisdom transmitted through an everyday activity, a veritable  Bah! Ante slapped the table, distracting me from my reverie. Even when you do everything right, sometimes life just doesnt deliver the goods. Like today, he said, looking around disgustedly. Lets get out of here.

He slapped down some money for the bill, then as I headed for the lift he grabbed my arm and pulled me away. Cant go that way, he said. They always shift tables between floors just about now. Always gotta have a viable exit strategy. Lets take the back stairs!

This article was written by my husband, Steve Clavey for a Chinese Medicine journal.