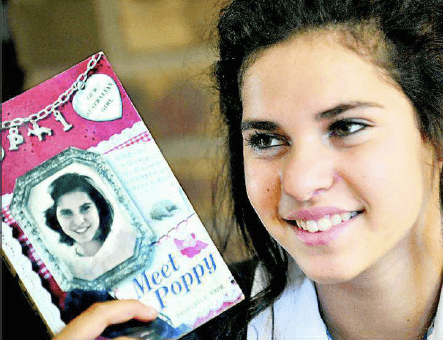 Shepparton’s Yullarah Lowe is the cover girl of a new series of Australian books that celebrate different cultural heritages. The 12-year-old appears on the cover of the book Meet Poppy,

part of the Our Australian Girl series which delves into the lives of four different characters living in different decades of Australian early colonial history.

Each character has four books about them within with Our Australian Girl series and Yullarah features on the cover for all four books about Poppy, an 11-year-old Aboriginal girl living in 1864. The Shepparton High School student said it was strange seeing her face on the cover of the book, which is released next week. “It was weird,” Yullarah said. Her mother Mary O’Brien said the strangest part of all for her was when she would walk into book stores and see her daughter’s face. “That’s definitely going to be the weirdest part,” Ms O’Brien said.

Yullarah was chosen from about 100 girls after her great aunty Maxine Briggs met the author of the Meet Poppy series Gabrielle Wang at the State Library of Melbourne – where Maxine works. Penguin books publisher Jane Godwin said Ms Briggs was assisting Ms Wang to make sure the information on Indigenous history was correct when Ms Briggs discovered the author was looking for a cover girl.

“Yullarah is perfect,” Ms Godwin said. Ms Wang also dedicated the series to Yullarah, with the inscription inside the front cover reading, “For Yullarah – the beautiful face of Poppy.”

“It was really that Gabrielle was grateful to Yullarah and her family that she could make sure all the Indigenous aspects to the story were authentic,” Ms Godwin said.

Yullarah has just begun high school.  She said she was more likely to be found on the netball court rather than chasing aspirations of becoming a model. “I want to play netball,” she said.

The Our Australian Girl series is a part of the new review of how history is taught in schools and incorporates discussions around multiculturalism, identity, racism and Indigenous issues.

3 thoughts on “Yullarah, the beautiful face of Poppy in the Shepparton News.”