Yesterday I was chased by an angry swarm of bees. I disturbed them when I lifted the lid of the compost bin.
I ran like the devil waving my arms about my head trying to get rid of the bees in my hair. I must have looked like a character in one of those funny cartoons.

Bev, the bee lady said they don’t like black furry things and of course I’ve got black hair.
I guess they’re programmed to be on guard against bears who will steal their honey. 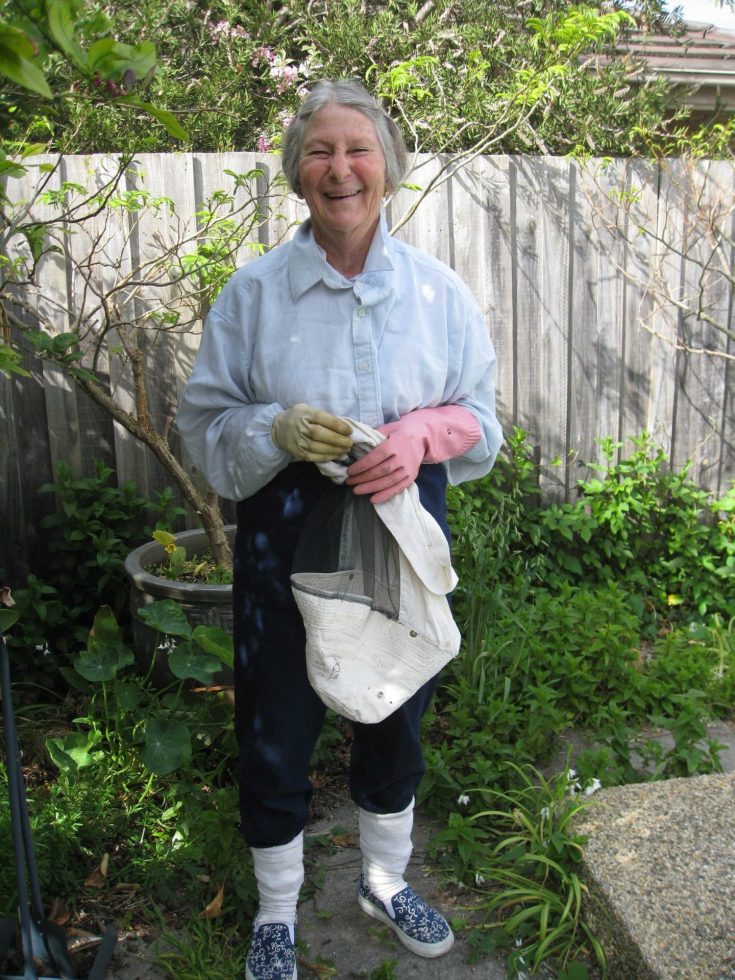 This is Bev. Bev doesn’t drive but rides a bike, does colonial dancing, belongs to a lacemaking and gardening group and of course loves her bees.

The last time Bev came was to collect a bee swarm that had landed on one of the trunks of the giant oak trees that line our street. She collected the queen with her swarm and placed them in a box, but I didn’t have time to drive her home. She said, that’s all right just drop me at the train station, so I did. She told me yesterday that her bee group still have a good laugh over her taking a swarm of bees on the train.

My mind goes wild with all the funny ‘what if’ scenarios. That’s definitely a story I will write one day.

I learnt new words like drone yard and virgin queen. It was a virgin queen in my compost bin with her infertile female workers. They are like ladies in waiting as they feed and groom her. 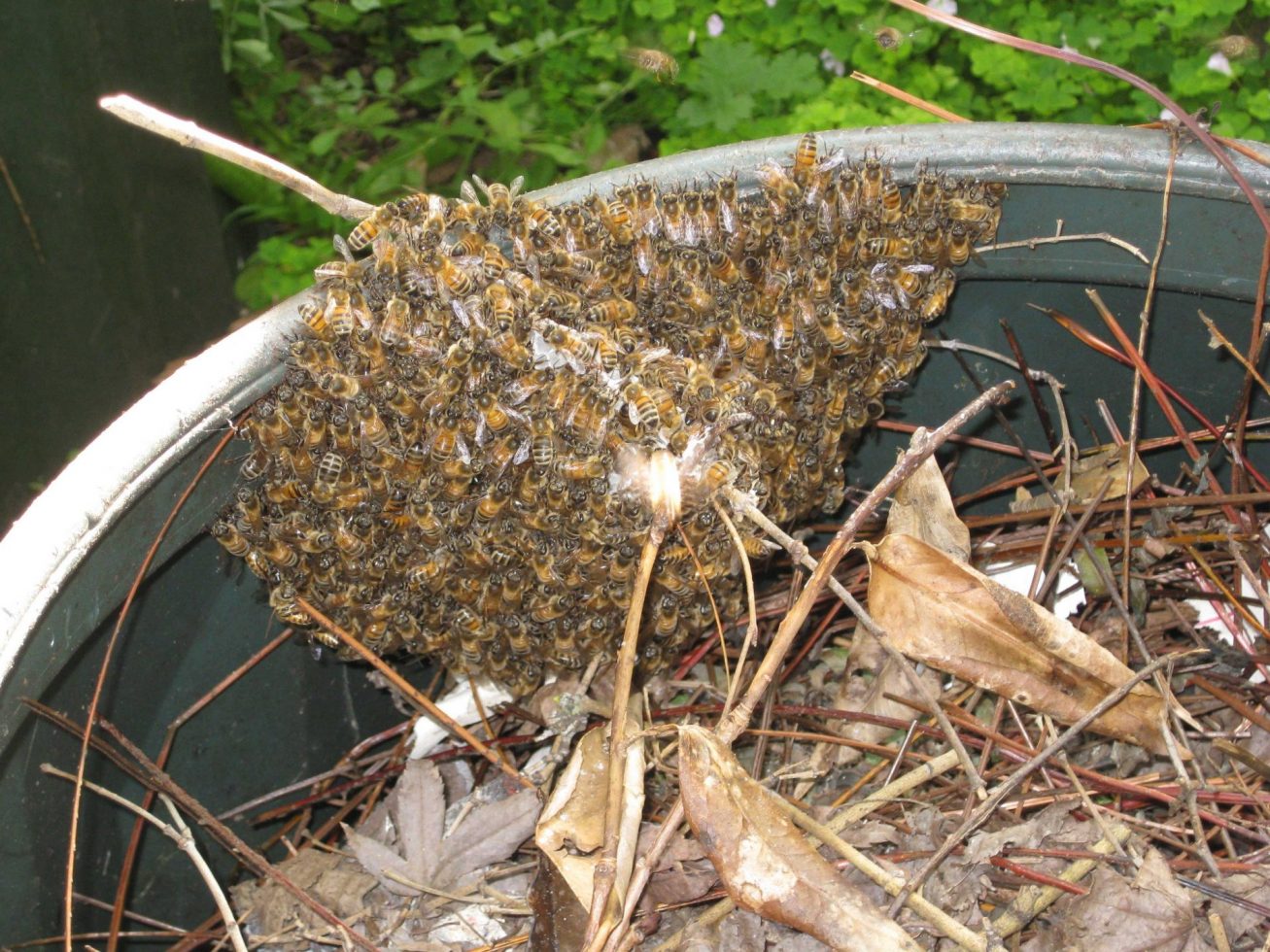 Bev came with a smoker but didn’t need to use it. The bees were quite content.

The virgin queen was in the centre of this mass of workers. They were attached to a stick so all Bev had to do was pick the stick up and place it in the cardboard box. 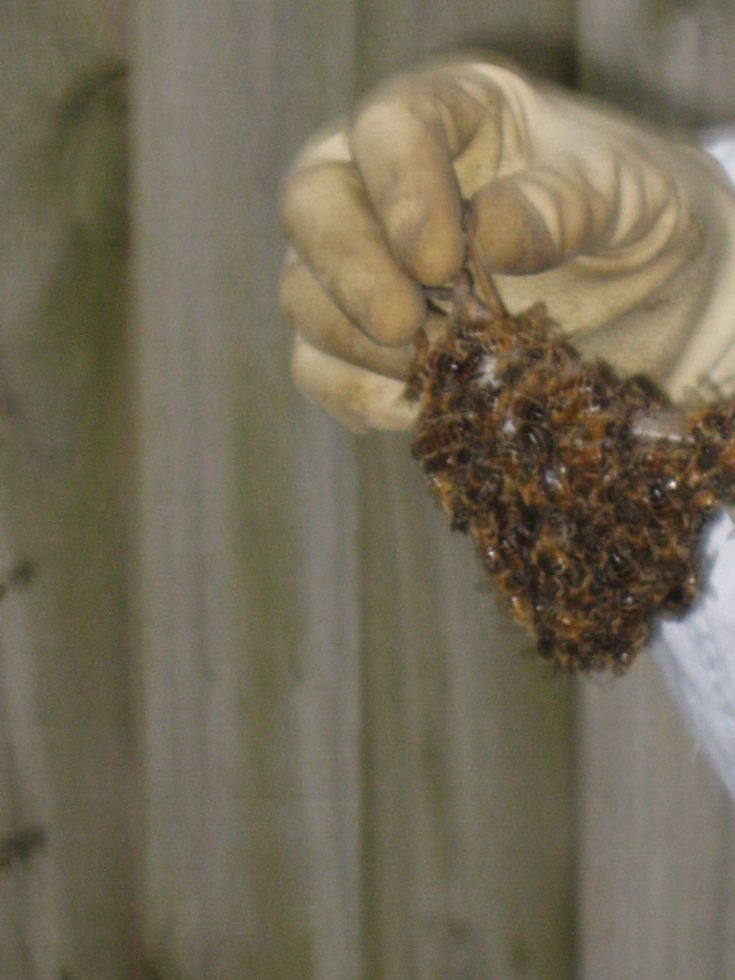 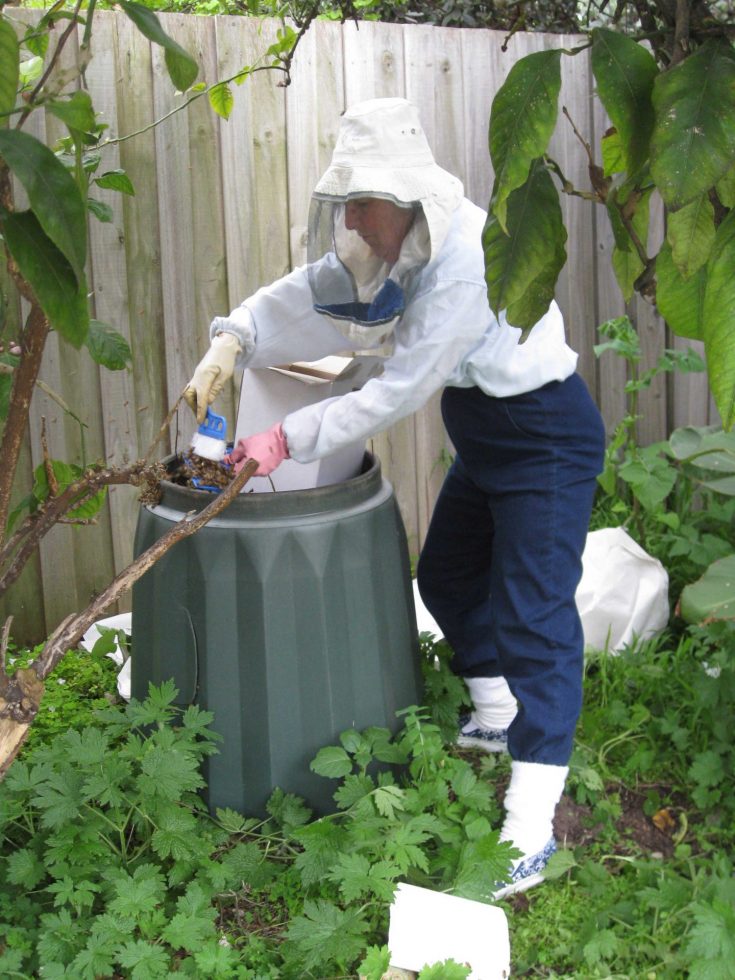 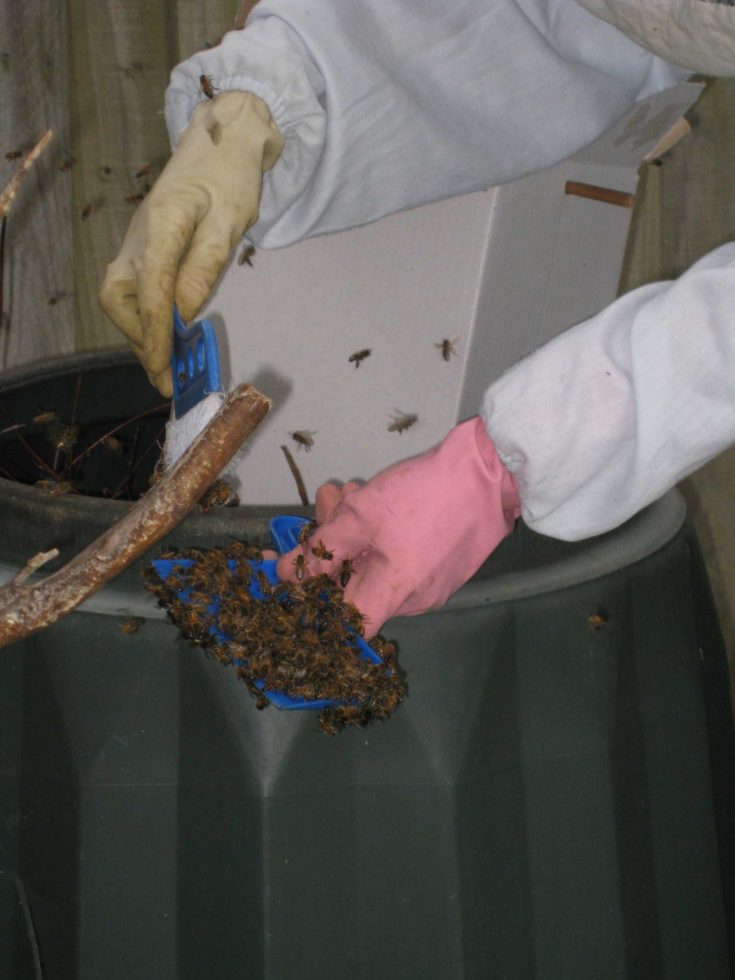 And look! They had only just arrived in my bin and already begun setting up house by building a honeycomb. 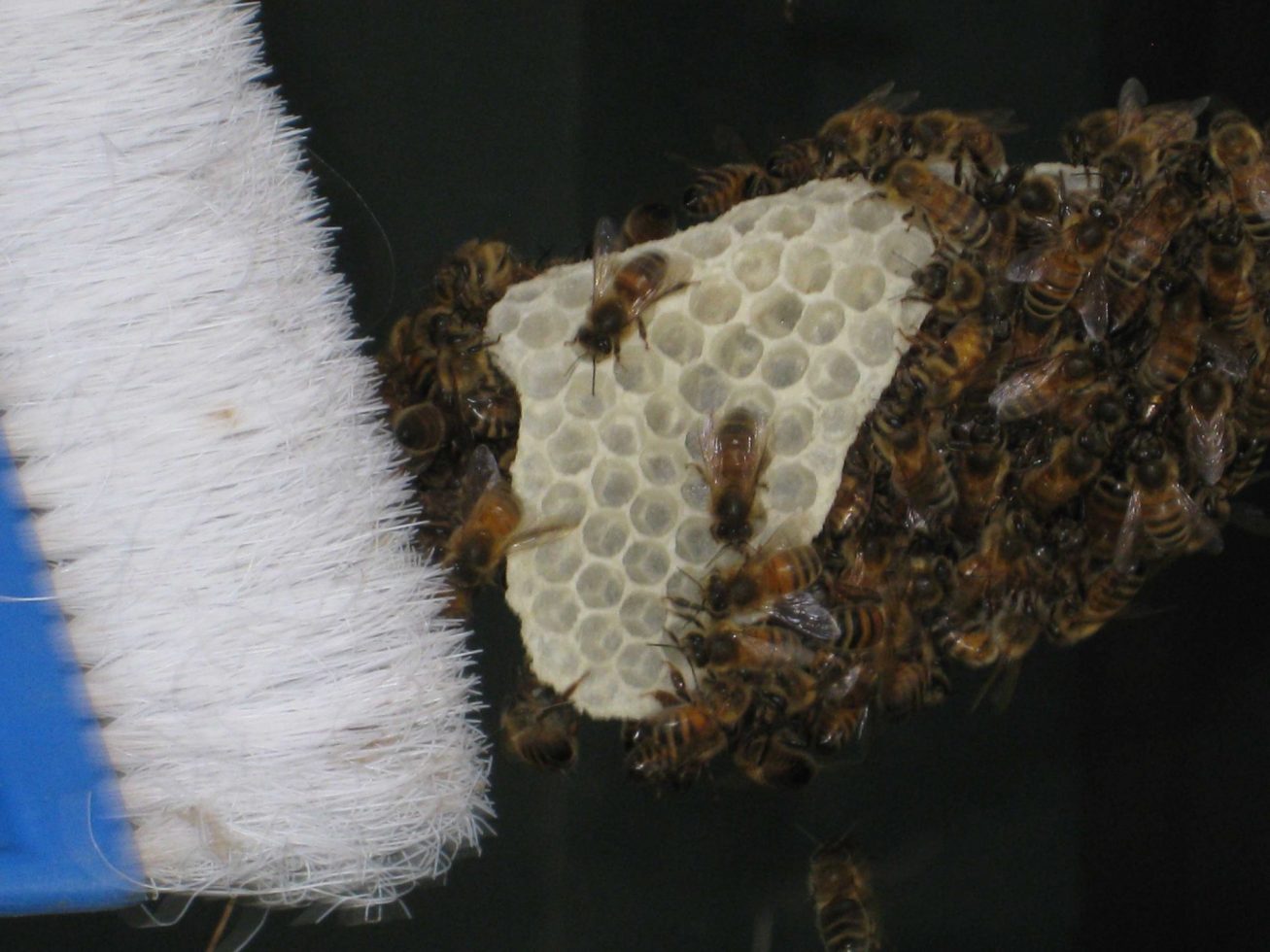 Bev is trying to coax the remaining bees into the box. She uses hairspray to spray on the area where the queen was. This will mask her royal scent. There were some bees on the lid of the box fanning their wings like crazy and with their abdomens up in the air. They were signalling the stray bees to come inside the box. 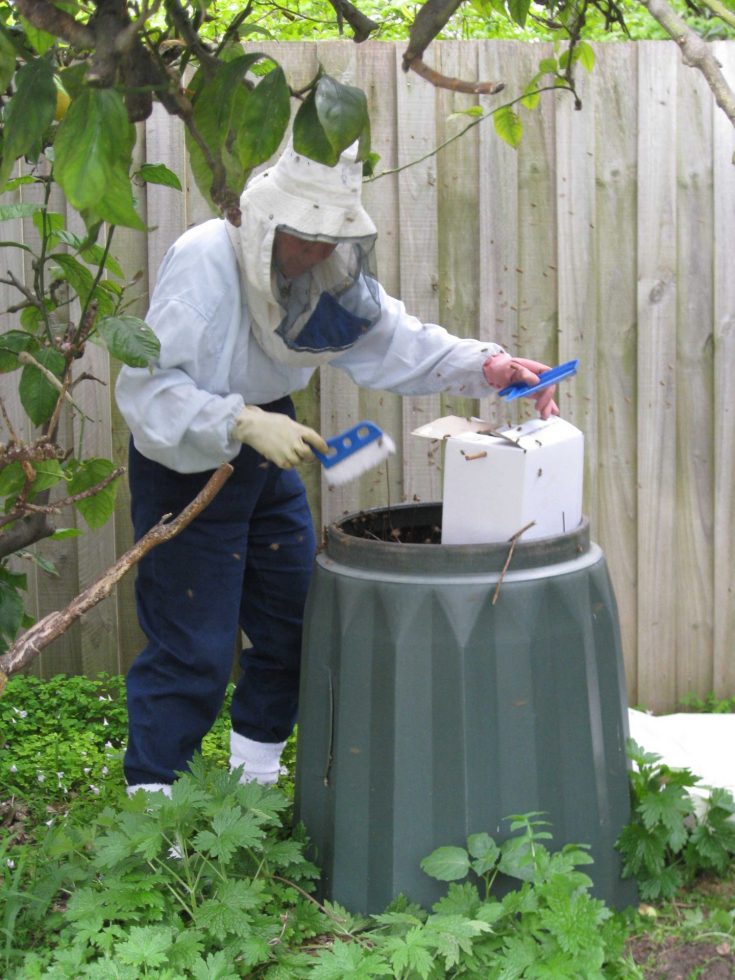 I learnt about the mating ritual that the virgin queen will perform. In a few days time she will leave the hive and find a low lying area along a creek or gully where drones from various hives have congregated. This is called a drone yard. They will grow excited as they sense their virgin queen approaching. When she reaches them she will soar 30 feet straight up in the air and the fastest drone will catch her and mate with her. Then he will die as he pulls away. The next fastest drone will do the same. And the next. And the next. The virgin queen will mate at least 9 times which will give her enough semen to last the rest of her life.
It all sounds like a tragic fairy tale.
The queen will lay more than sixteen hundred eggs a day and well over a million in her lifetime

I asked Bev what she is going to do with the swarm when she takes it home. As she has enough hives in her back garden she will replace an older queen who is less productive with this new one. Bev loves bees and can’t bear to kill the old queen by treading on her like other bee keepers do. She will put her in the freezer where she will go to sleep.

I will arise and go now, and go to Innisfree,
And a small cabin build there, of clay and wattles made:
Nine bean-rows will I have there, a hive for the honey-bee,
And live alone in the bee-loud glade. ~ William Butler Yeats

I dont feel very much like Pooh today,” said Pooh.

“There there,” said Piglet. “Ill bring you tea and honey until you do.