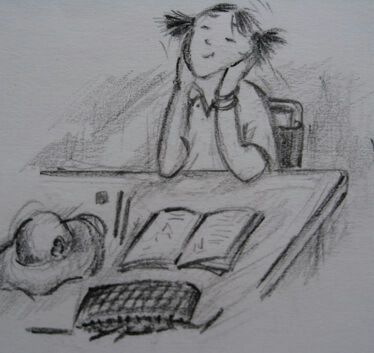 Sometimes you come to a place in your writing and there seems to be no obvious direction to take. The story has been rolling along but suddenly you come to a roadblock. Thats when you let your main character take over. He or she will tell you where they want to go. They have an innate sense of the story, after all it is theirs.

Recently I used this method with my current WIP. I knew the cemetery scene was a significant one but didnt know why. I decided to go to the St Kilda Cemetery not far from my house. It was built in 1853 and is one of the oldest in Victoria, so it was perfect for my historical novel. My plan was to sit quietly, imagining the scene out of my book, imagining that I was the character, then letting her tell me what was going to happen next.

But it didnt turn out at all as I planned. When I went through the gates I noticed a tall thin man in tee shirt and baseball cap standing in the rotunda in front of me. The cemetery was deserted so I kept an eye on him as I walked down the first narrow path. I didnt want to get too deep into the maze of pathways so I kept close to the main entrance.

When I stopped to read some words on a headstone I noticed that the tall thin man had left the rotunda and was walking down the path behind me. We were separated by two rows of graves so I felt quite safe. But when he came to the end of his path he seemed to be hovering there, waiting for me. If I had kept on going I would have run right in to him.

I made my way back to the gates to see what he would do next and pretended to read the map. Sure enough here he was coming back my way.

My research had been ruined by a stalker. The only thing I could do was leave.

I was annoyed as I drove away. I still hadn’t solved my problem. I was still stuck.

But then I had a sudden realisation.The stalker was my scene. I thought that the inspiration would come from my imagination but instead it came from real life. I had been looking at the experience in the wrong way!

I stopped at a park and sat in the shade of an old eucalypt and wrote the whole scene up.

So thanks creepy thin stalker guy with the baseball cap, you made my day.

2 thoughts on “WHEN YOU’RE STUCK”