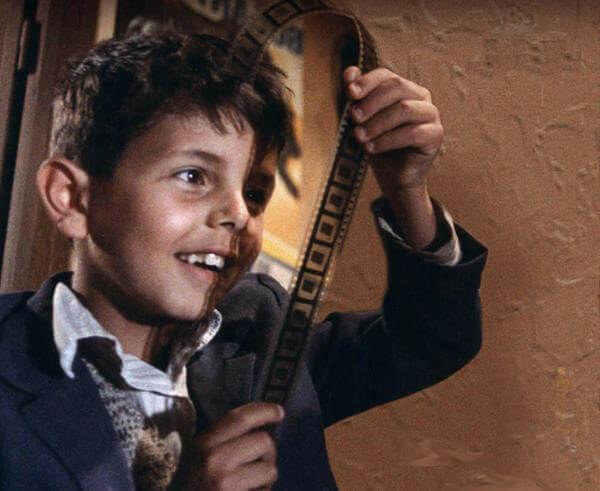 When I was studying graphic design at RMIT, I majored in photographic design and one of my dreams at that time was to become a movie director. I even made a short film for one of my assignments which was centred around a chessboard. If it sounds familiar my heroes were Bergman, Fellini and my all time favourite Kurosawa. Not only do I love Kurosawa’s story telling, but his framing of each shot is wonderful, each one a work of art.

I was an artist before I became a writer and this is the reason why I am just as passionate about movies as I am about books. Film encapsulates both art and storytelling.

Among the films that I love are Miyazaki’s My Neighbour Totoro and Spirited Away, but I would like to add another to this list. 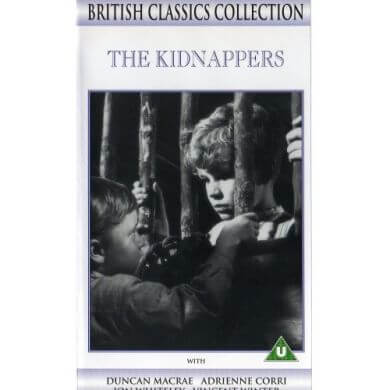 THE KIDNAPPERS directed by Philip Leacock, screenplay by Neil Paterson

SYNOPSIS: A Scotsman, Jim MacKenzie, living on a primitive homestead in Nova Scotia, is raising his two grandsons, Harry and Davy, following the death of their father in the Boer War. Forbidden by their grandfather to have a dog, Harry and Davy “kidnap” an unattended baby and care for the child in a lean-to shack. When found, the baby proves to be the child of MacKenzie’s most-bitter Dutch enemy.

I first saw The Kidnappers when I was a child, then again on the ABC. It is old, made in 1953 by the British director Philip Leacock about two small orphaned children who find a baby and keep it as a pet. Unlike American films of today where the children are just that much too precocious, too knowing, the films of the 50’s were child-centred. The children still possessed a sense of child-like wonder. The Kidnappers is a story about innocence, prejudice, love and forgiveness.

For writers, dialogue can be one of the hardest things to master. Studying dialogue in film is a great way to learn because every word, every sentence in a movie must reveal character or push the story forward. The dialogue in The Kidnappers is perfect.

“Are we going to keep it forever?” asks young Davy.

“I don’t know,’ replies Harry. “We’ll keep it for a year or two anyways, until it’s got a mind of its own – and then, if it wants to hit the trail, there won’t be no stopping it.”

Unfortunately you won’t see The Kidnappers in your local video shop. I had to buy mine over the internet. But it’s definitely worth viewing if you can find it.

THE UNDERNEATH by Kathi Appelt

SYNOPSIS: A calico cat, about to have kittens, hears the lonely howl of a chained-up hound deep in the backwaters of the bayou. They are an unlikely pair, about to become an unlikely family. Ranger urges the cat to hide underneath the porch, to raise her kittens there because Gar-Face, the man living inside the house, will surely use them as alligator bait should he find them. But they are safe in the Underneath…as long as they stay in the Underneath.

The Underneath is a deceptively simple book with large text, one page chapters and black and white illustrations throughout. But it is written so beautifully and the story is so intriguing and unusual, it will haunt me for a very long time. Award winning US author Kathi Appelt has written over 30 books for children and young adults. Admittedly I had never heard of her until I picked up The Underneath at Melbourne airport on my way to Shanghai. Who said a cover doesn’t sell a book? I saw it on the shelf and fell in love with the title, the silver stickers announcing it to be a Newbery Honour Book and a National Book Award Finalist, the unusual size and shape, and the cute drawing of a hound dog and two kittens hiding in the Underneath.

The Underneath is a young adult novel that is written in beautiful lyrical prose which often took my breath away. Appelt is a poet and it shows throughout this magical tale of love, betrayal and revenge.

“Whenever there is a breeze in the old forest, you might, for a moment, realise that the trees are singing. There, on the wind, are the voices of sugarberry and juniper and maple, all telling you about this hound, this true-blue hound, tied to a post. They have been watching him all these years, listening to his song, and if he knew what the trees were singing, it might be about how he found a friend.”

I hold onto very few books these days. As you can see my bookshelves cannot accomodate any more. 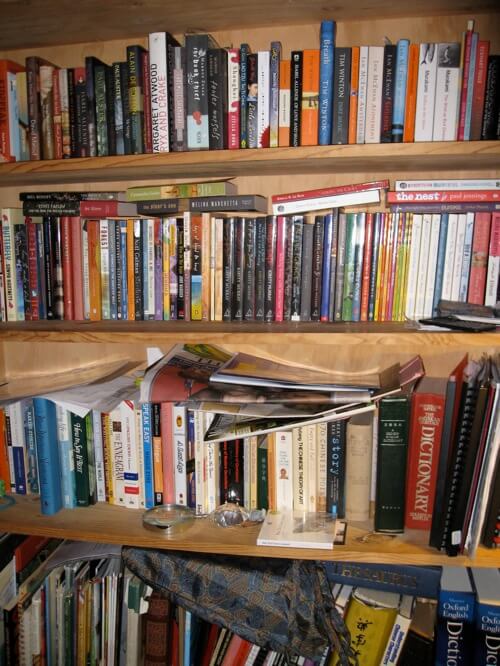 So unless books are written by friends, I pass them on to others. I’m tending more and more towards purchasing audio books online and downloading them onto my ipod. And will eventually buy an ipad to read ebooks on.

But for me, The Underneath is a keeper.