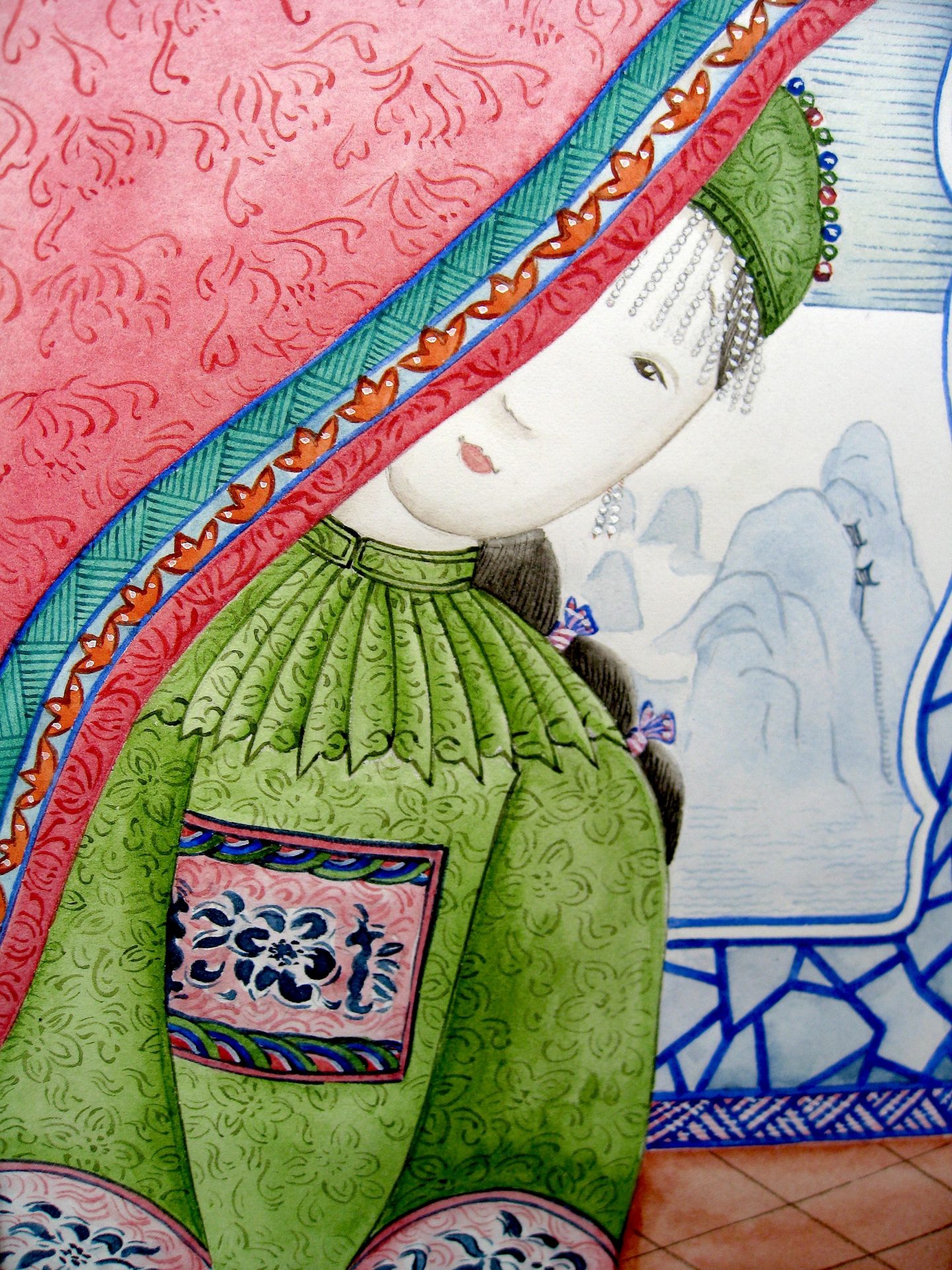 Today is the Autumn Moon Festival.

Varying stories abound about how this festival came into being. In some Hou Yi becomes a ruthless ruler. While in others, Chang Er is a greedy wife.

Here I retell one of my favourite versions of the legend.

I prefer this one because it does not lay blame on either the handsome Hou Yi or the beautiful Chang Er.

One morning a strange phenomena happened.

There arose in the sky not one,

but ten suns all blazing fiercely!

The animals fled the forests as fires burned.

The earth became cracked and scorched.

There lived at this time a hunter and magnificent archer called Hou Yi. Wanting to do something to save the world from this terrible disaster, he made his way to the highest peak of the Kunlun Mountains, drew back his great bow and released an arrow.

The arrow sliced through the burning sky and pierced the first sun.

The sun flared, quivered and was no more.

In this manner Hou Yi shot down eight more suns.

Finally there was just one sun left in the sky which Hou Yi commanded to rise and set according to the correct time of day and night.

Immediately Hou Yi became a hero. People loved him for his benevolent ways and great archery skills. And many flocked to his side.

But amidst the crowd lurked a man called Peng Meng.

One day as Hou Yi was hunting, the Empress of Heaven, Xi Wangmu appeared before him. As a reward for his great deed, she presented him with the elixir of immortality.

‘When you drink this,’ she said, handing him a tiny jade bottle. ‘You will change into a celestial being and dwell in the heavenly realm forever.’

But Hou Yi had a beautiful wife called Chang Er who he loved deeply. He did not want to become an immortal and live apart from her. So he told Chang Er to put the elixir away for a while.

Chang Er hid the the tiny bottle in her lacquered treasure box.

Now the greedy Peng Meng heard about the elixir and chose a time when Hou Yi was out hunting to break into the house. With his sword raised he demanded Chang Er hand it over.

Chang Er refused but Peng Meng threatened her until she grew so afraid she knew there was no way out.

She took the bottle from her treasure box and quickly gulped down the contents before Peng Meng could stop her.

He looked on aghast.

Immediately Chang Er began to float out of the open window. Up through the black silken sky she drifted towards the heavens.

That night when Hou Yi returned home, Chang Er’s maidservant told him what had happened.

Hou Yi was overcome with grief.

He ran outside and looked up at the moon which seemed to be especially yellow and bright.

Then he saw on its surface, the graceful shadow of his beloved wife.

He called out to Chang Er but she could not hear him.

He tried to chase the moon but it eluded him.

Finally Hou Yi gave up hope of ever seeing her again. Chang Er had become an immortal and would never return to his side.

He set up an altar laden with fruit and sweetmeats and burned incense in her honour.

When the people heard that Chang Er was now a celestial being, they too set up altars, thanking her for her kind heart and sacrifice. Together they prayed for peace and good fortune.

And so, on the 15th day of the 8th lunar month, the Moon Festival is celebrated where people show their love and longing for a better life.

Couples swear their love for each other and those lovers who are apart pray to be reunited soon as they gaze up at the same full moon.

Of course no Chinese festival is complete without a special food to go with it, and this is the time of year that we eat Moon Cakes.