Yesterday the launch of The Wishbird was held at The Little Bookroom in Melbourne. My friend Cath Crowley gave the most beautiful launch speech. Her words shone and glittered and flew around the room. This is what she said:

It’s my great pleasure to welcome you here to the launch of “The Wishbird” by Gabrielle Wang.

I told one of my friends that I was launching Gabrielle Wang’s book this Saturday. And she smiled and said, – that’s your magical friend. As opposed to the bulk of my friends who are – non-magical.

But that is how I feel about Gabrielle, even a chai tea with her is an adventure. She’s open to these lovely coincidences and she makes me feel as though writing is not just something I do at my desk, but something I live. She makes me believe that stories find us as much as we find them.

Author of “The Garden of Empress Cassia”, “The Pearl of Tiger Bay”, “The Hidden Monastery”, “The Lion Drummer”, “A Ghost in My Suitcase”, “Little Paradise”, “The Race for the Chinese Zodiac” and “Meet Poppy” from the Our Australian Girl Series.

Gabi is an Ambassador for the Victorian Premier’s Reading Challenge, and anyone who has heard her speak will be in no doubt at how lucky they are to have her in this role.

I introduce to you the very magical on the page and in person – Gabrielle Wang, a woman with dream eyes and a wish bird heart.

I often have dreams about the books I’m going to launch, but none so beautiful than the one I had about “The Wishbird”. I dreamt that the pages were made of silk, and that the words had wings that fluttered.

I had the dream before I had even held the book. Not a surprising thing, if you know Gabi.

I felt quite certain that the dream had come from her that before she went to sleep that night Gabi yawned, thought about it, and flicked me off some of her landscape to get me started.

The only thing better than having a dream like that is being able to ring Gabi, or tweet her, and tell her that you had it.

Some time ago I saw a 3D film at Imax, “The Flight of the Butterflies”, about the migration of the monarch butterfly.

I sat in a dark cinema with a whole lot of little kids wearing 3D glasses, and the dark came down and the film came on, and the forest and the birds and the butterflies rose up and all around me, this lush world filled the cinema. All around me people reached to grab this floating world.

I felt as though I were reading “The Wishbird” in 3D glasses open the book and the world escapes off the page in gorgeous pictures and in words. It isn’t just the pages that are made of silk, the words themselves seem to be. Gabi sent me a modest dream, but then that’s the kind of person she is.

I know it can’t have been this easy, but it feels as though she opened her hands, and out the world flew.

Out flew The Wishbird, Mellow, a wonderful parent, as birds of course, can be, out flew Oriole – a girl who sings songs about rocks carved into strange shapes by the Wind, about her love for Mellow, the magical Wishbird, who is older than the ancient Banyan tree itself.

Out flew her wonderful descriptions, candied cumquats in the market of Soulless and the treasures that Boy finds, a silver ring with a tiny blue stone like a mouse’s tear.

The forest, moonlit, with nests made from fragrant Sandalwood twigs and lined with soft moss, a cluster of turquoise lakes that mirror the white fluffy clouds, and the city of nightmare that Oriole is being flown towards, the city of mouthless people.

Gabrielle’s characters are spectacular. Boy and Oriole are heroes, but they have flaws. They make each other stronger and better, as friends should do. They save each other, they become the heroes they need to be. They learn how to deal with anger and fear, about how to live with integrity when you’re hungry.

And they’re funny along the way. I love that on their scary journey, they make me laugh.

“Boy did not tell Oriole about the Demon Monster’s reputation for eating children, nor did he mention the moving statues in the garden.”

I agree boy, there are some things a girl just doesn’t need to know.

The book is genuinely suspenseful. Each scene leads you towards the next, telling you to hold your breath, wait, there is more to come and the way will be dangerous but don’t worry it will be lit – “the dungeon is dark and damp, but she (Oriole) still felt a little warm as she ate. And she still had her tongue. For now.”

It’s great storytelling incredibly moving- the idea that we can lose our dreams, our music, our forest, the threads that tie us to people close to us, even more frightening that our leaders can convince us that we that we don’t need these things anymore. Or that our leaders can convince us that strangers speaking a language we haven’t heard are to be feared.

Oriole must go into another world, where people don’t hear her voice as beautiful. She must endure being locked up and threatened by terrible things. And she must risk all to save the city, her forest, her family, her friend. She must believe that those who are lost, those who have committed brutal acts, are not beyond saving.

“The Wishbird” opens up a discussion on what it is to be human, and how easily we can be convinced that other people aren’t, and how easily our own humanity can be taken – or given – away.

This is a love story – love of words, of music, of dreams, of people, of nature, of colour, of flight.

Let the words fly out. 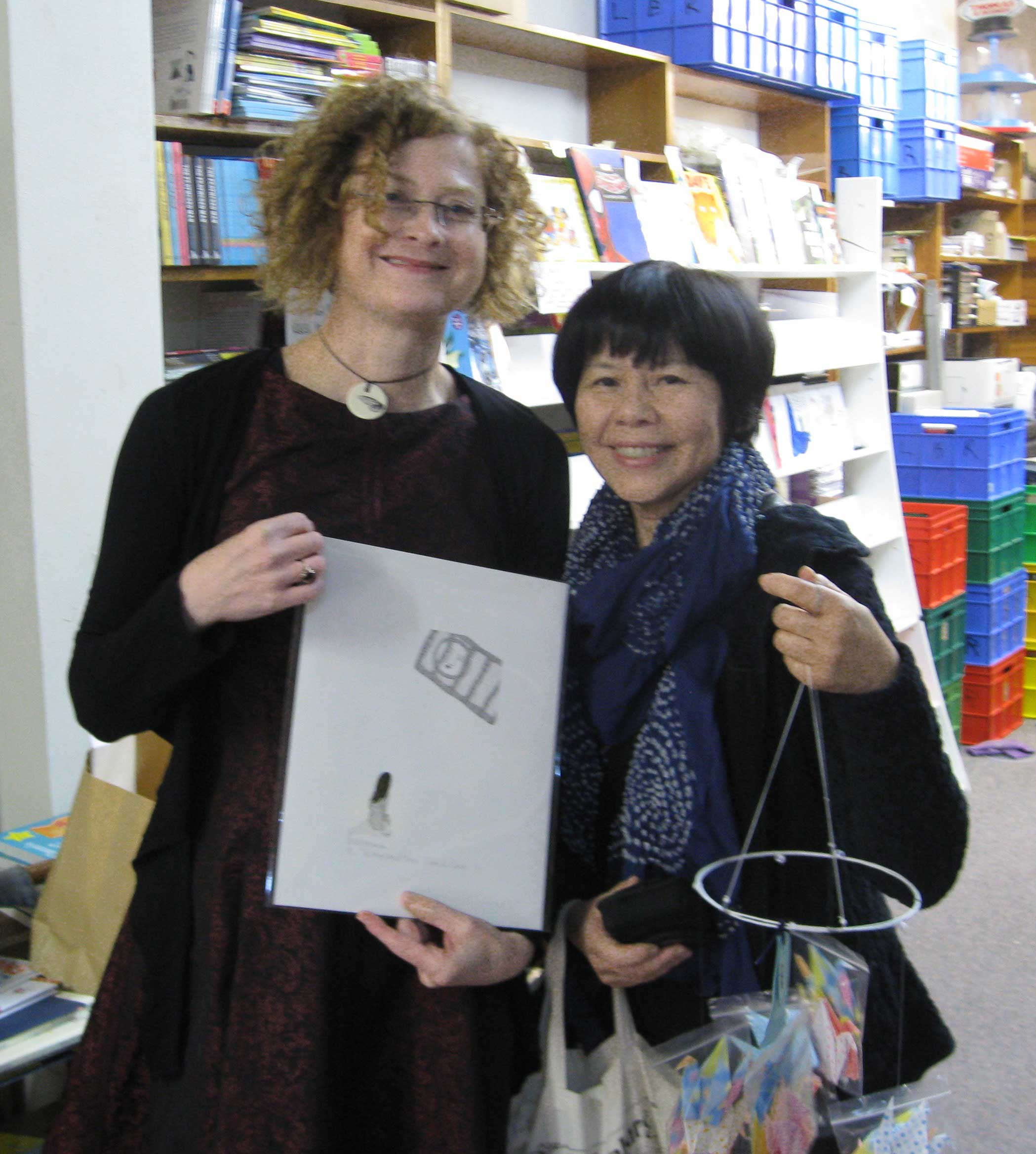 Here we are, Cath and me exchanging gifts backstage before the launch began. I gave Cath a limited edition print of one of the internal illustrations and she gave me this beautiful Wishbird mobile. I have it hanging in my writing and illustrating room. 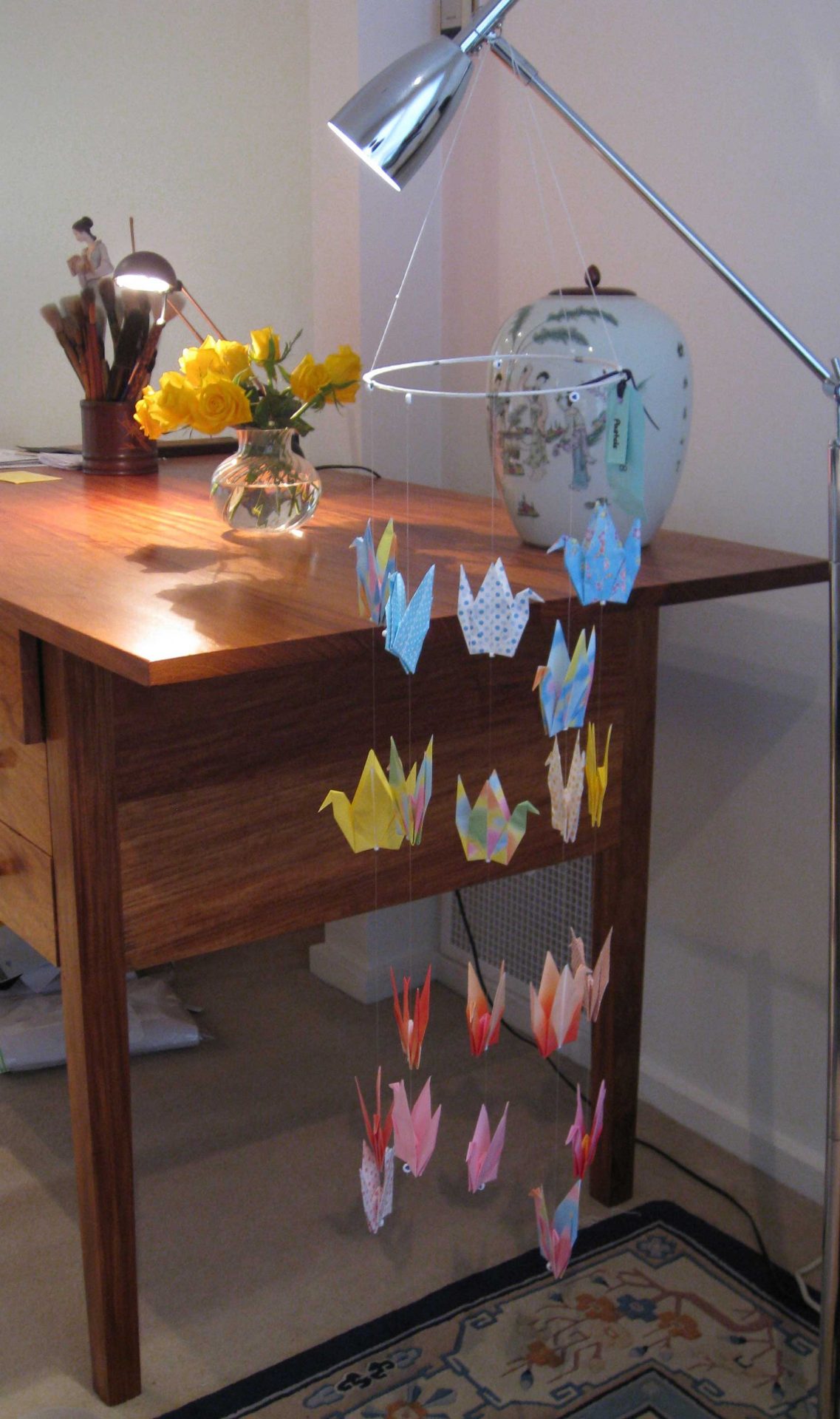 Food was served. These are beautiful Wishbird shortbread baked by my cousin Melissa Chen. 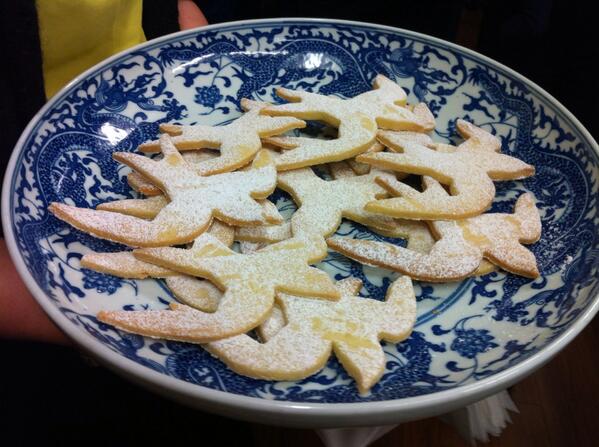 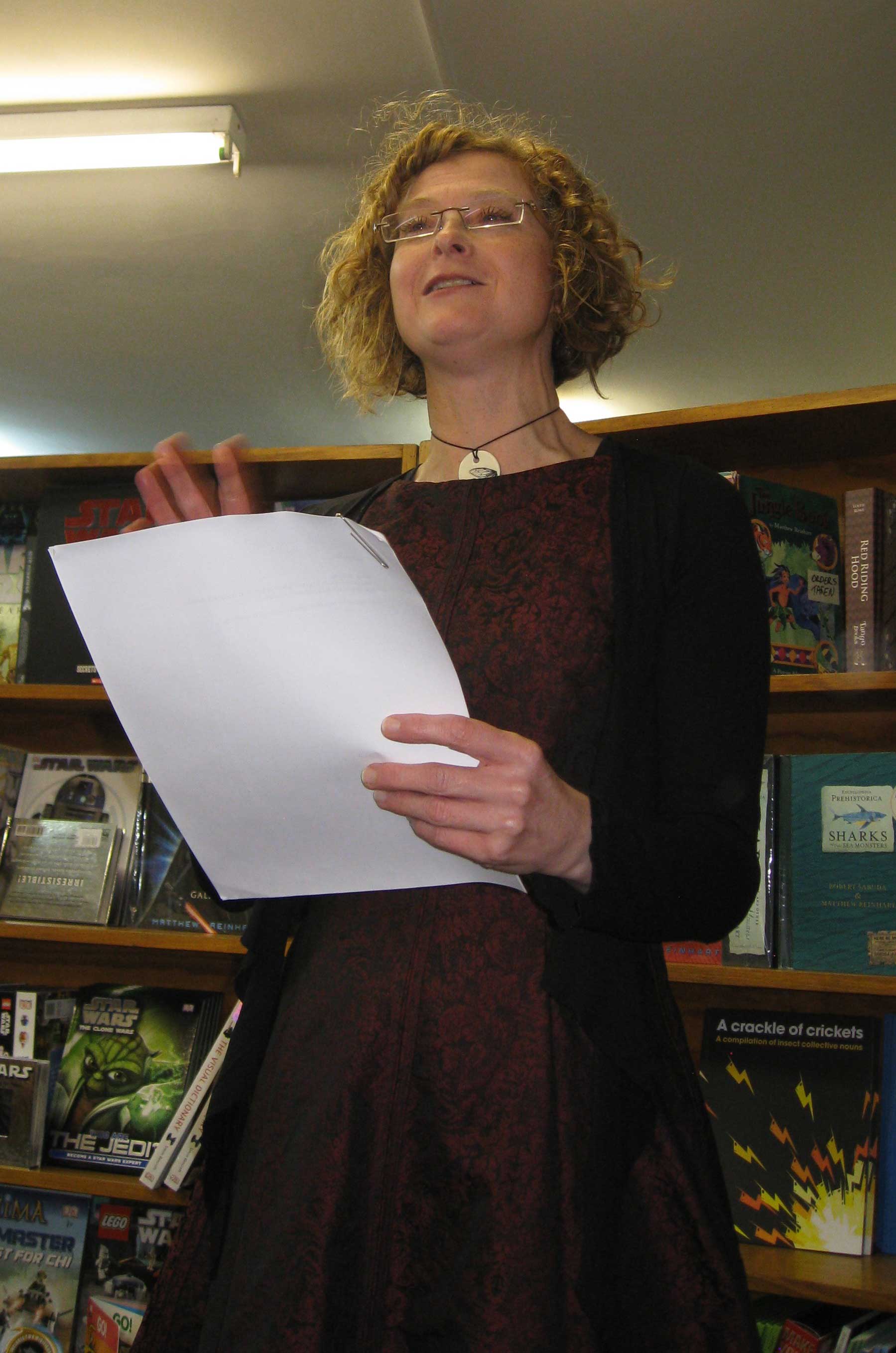 Then I spoke about the inspiration behind the novel and thanked the many people who helped make this book possible. 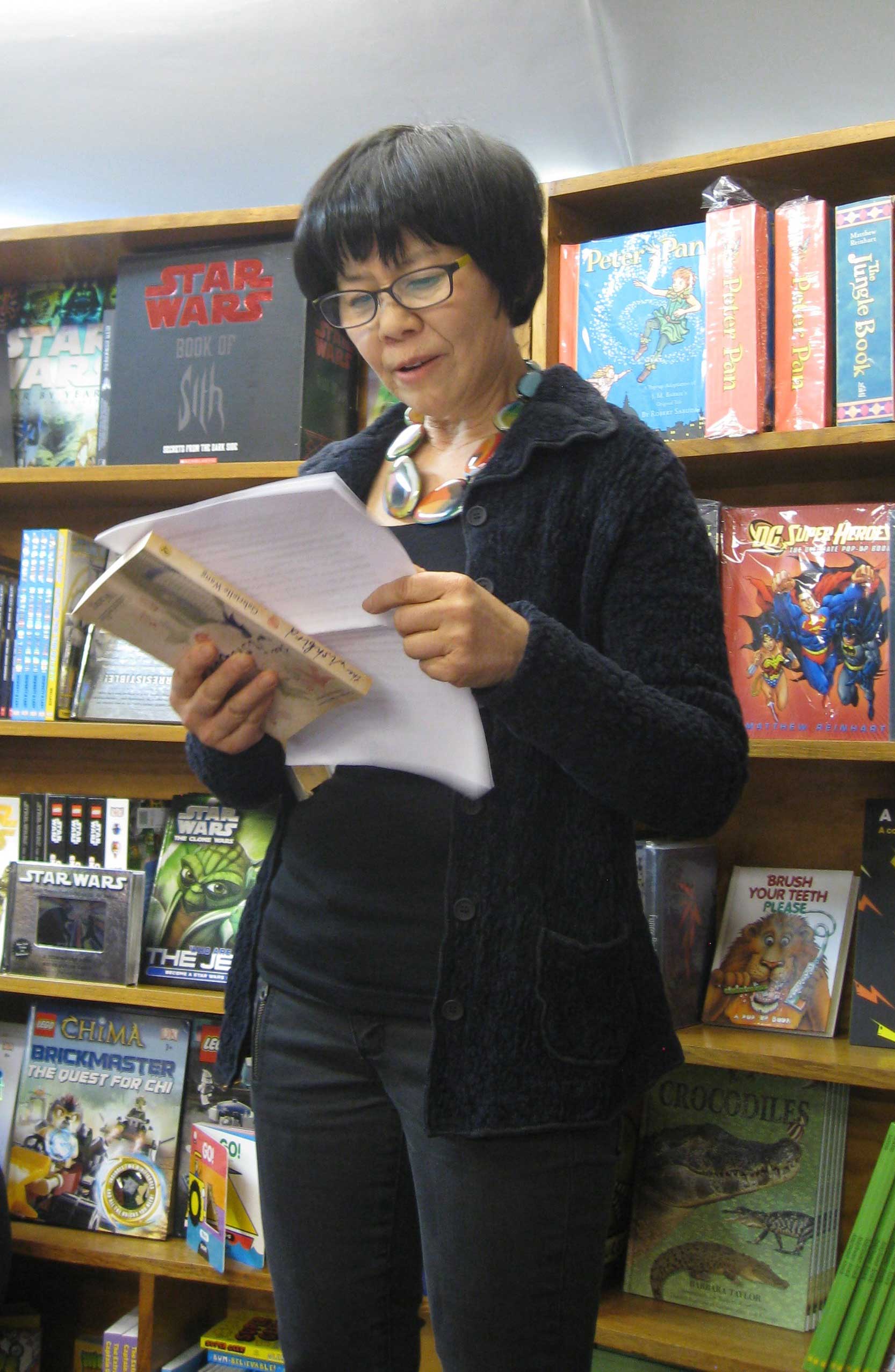 And after the speeches everyone received a little meringue Wishbird which my sister-in-law Allison baked. I am lucky to have a family of wonderful cooks. Then we all made a wish together. 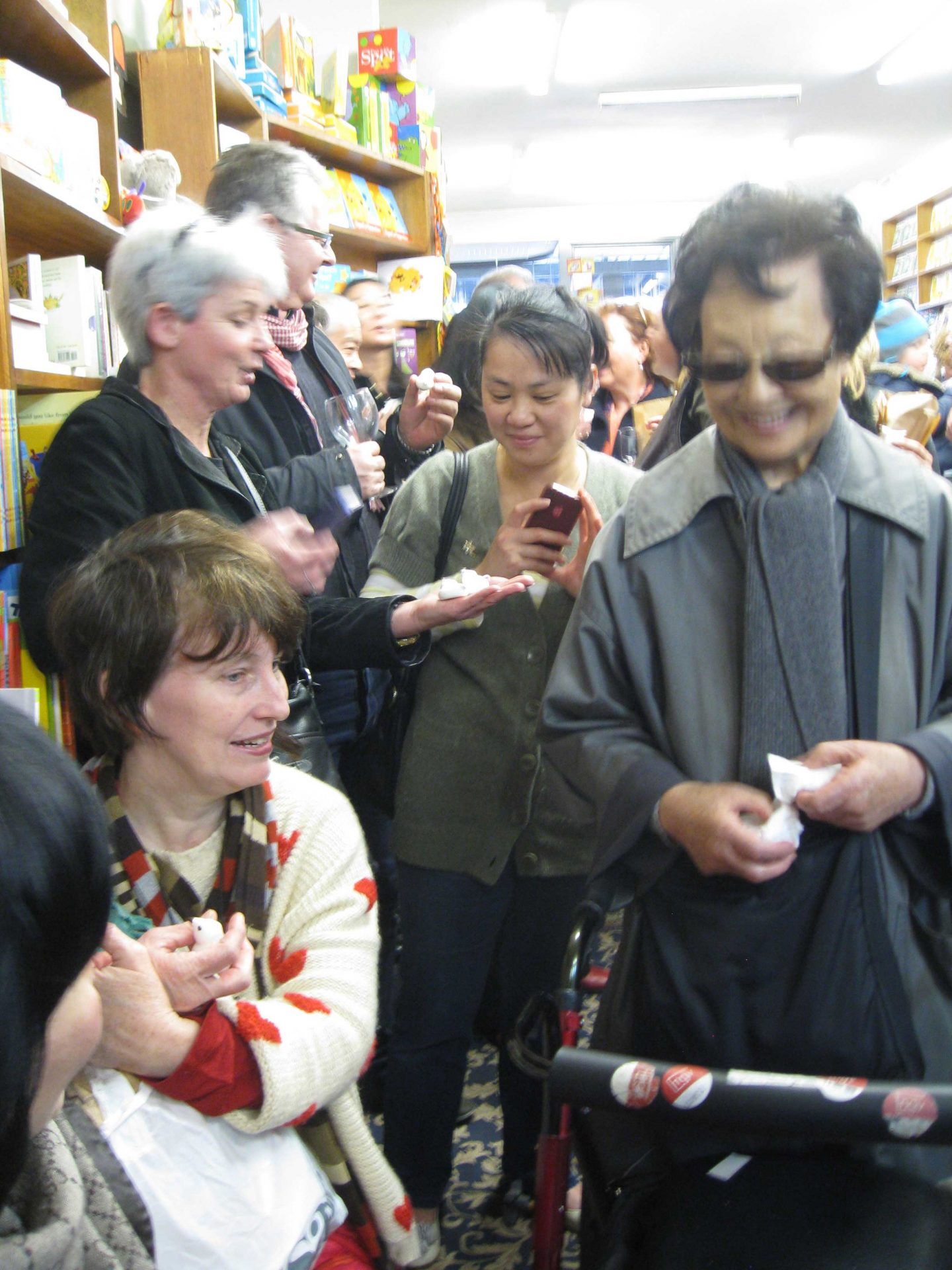 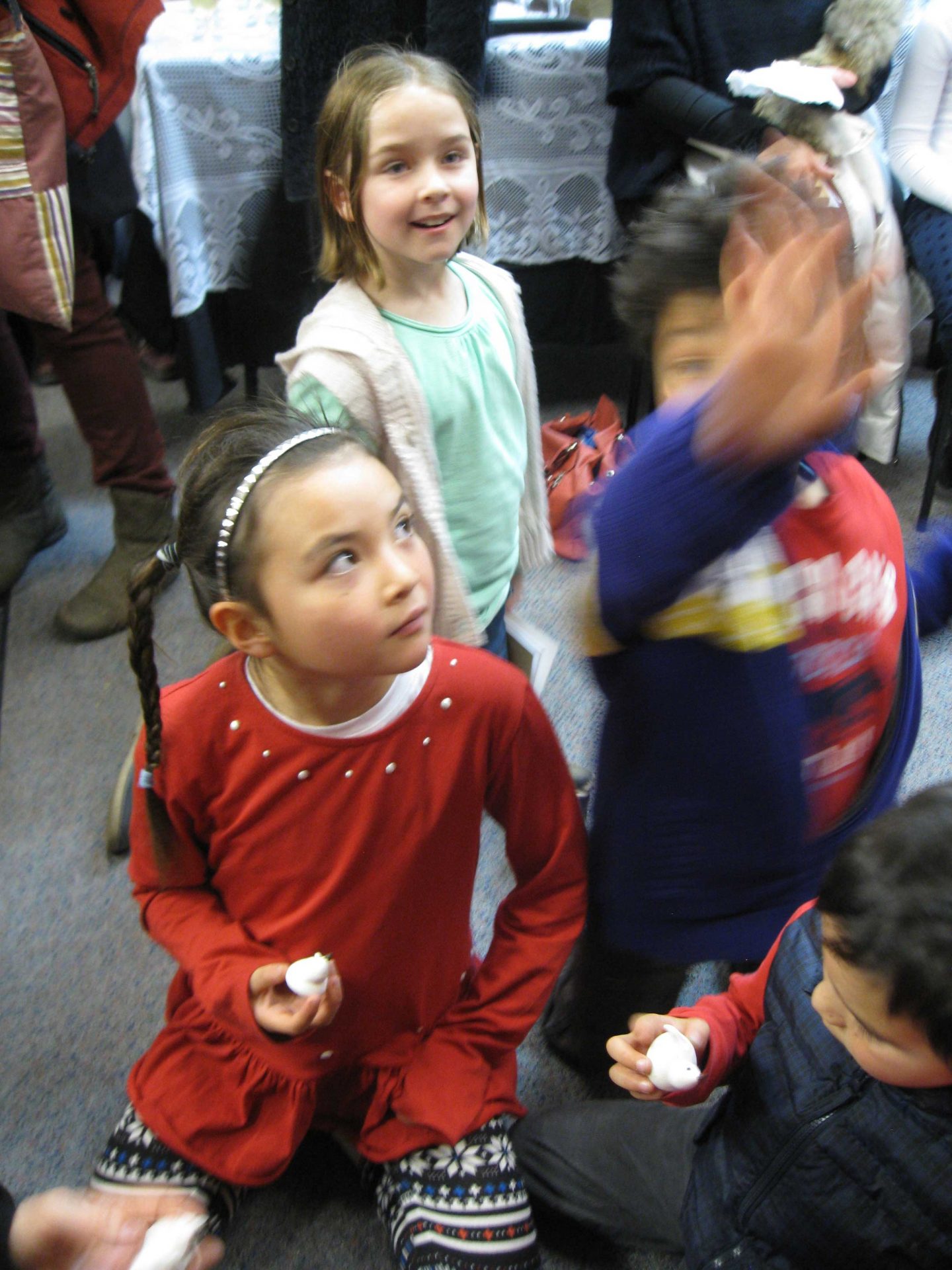 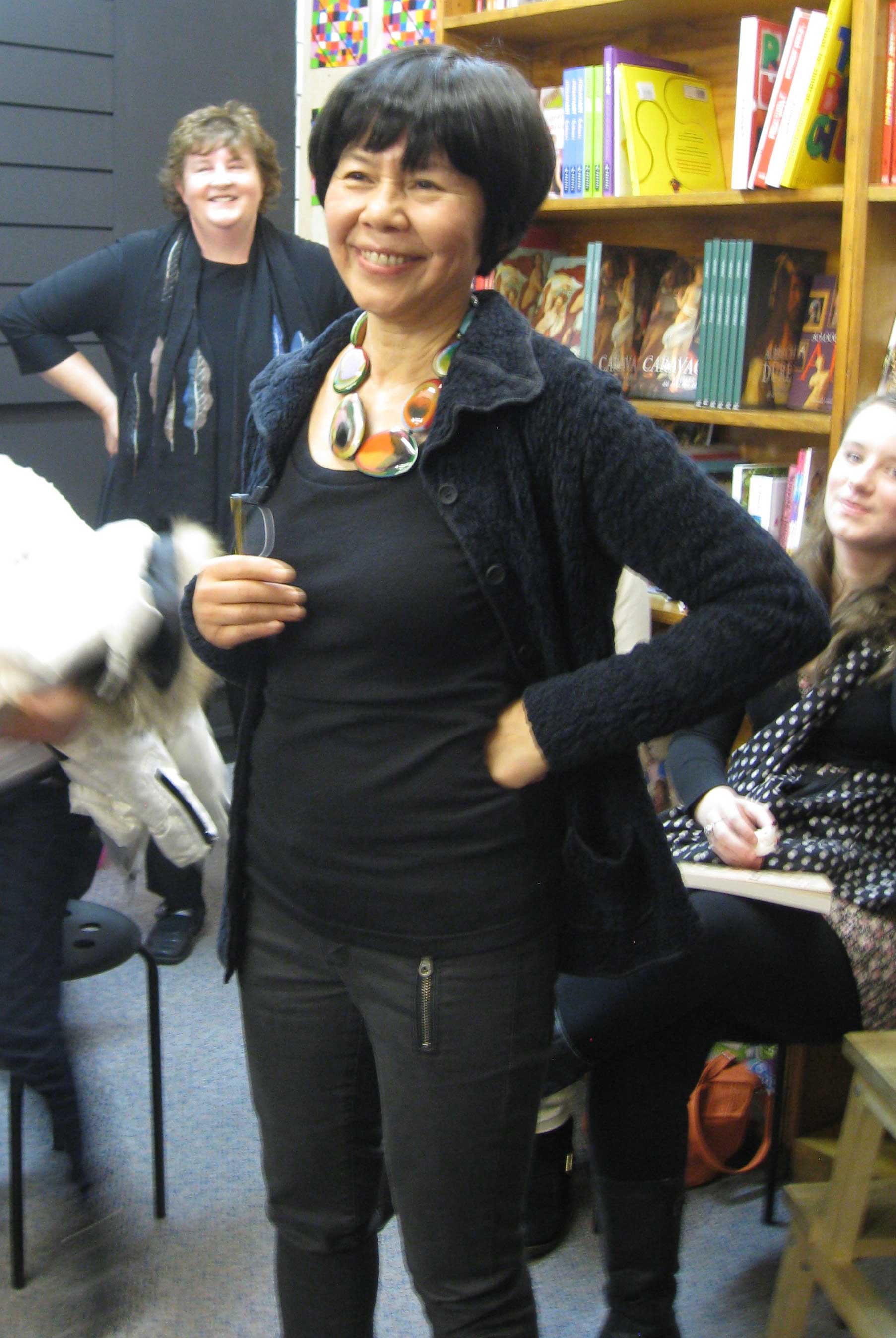 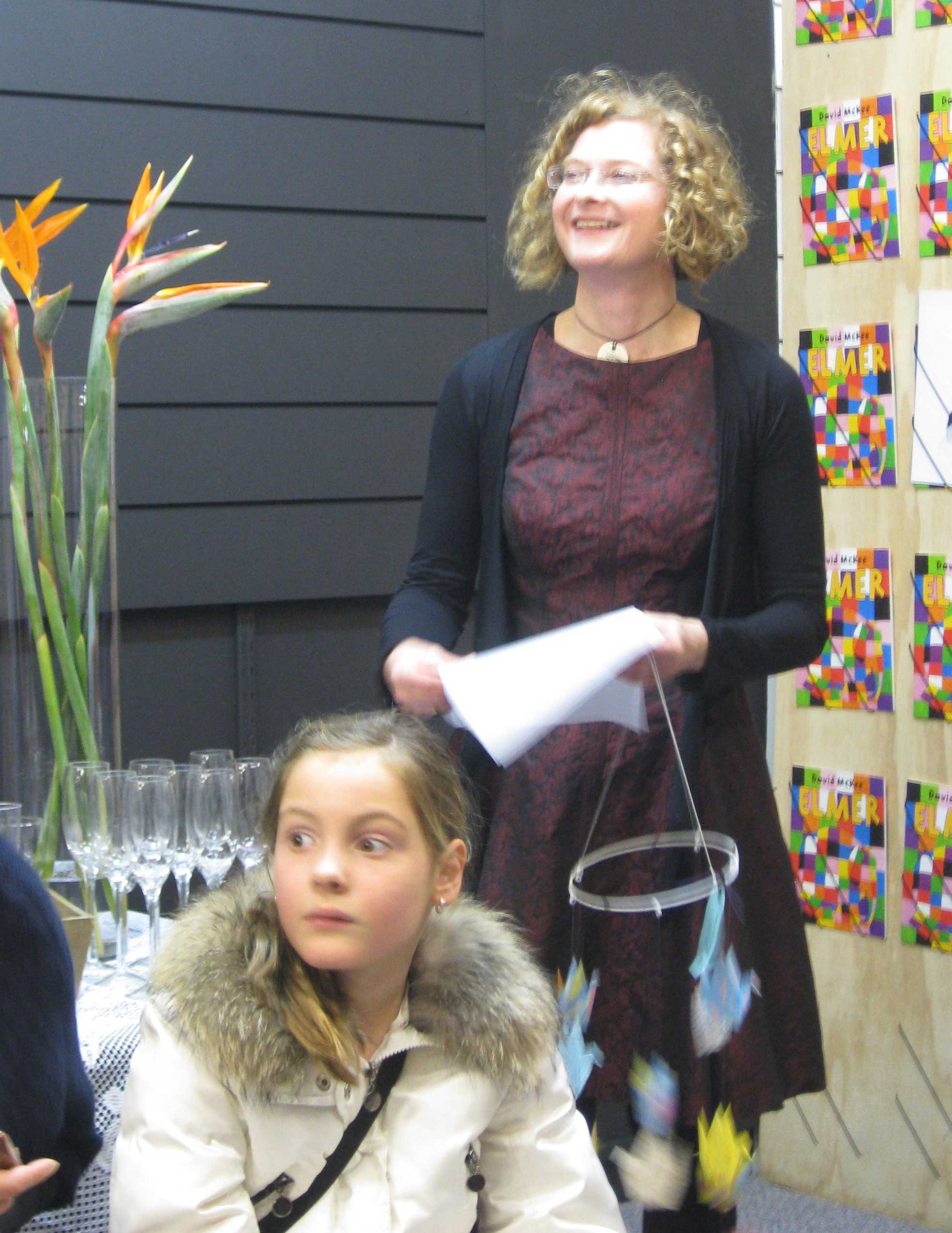 Next came the signing. I have a gorgeous box of old fashion rubber bird stamps especially for The Wishbird. They remind me of when I was young and had my best school work stamped by the teacher. 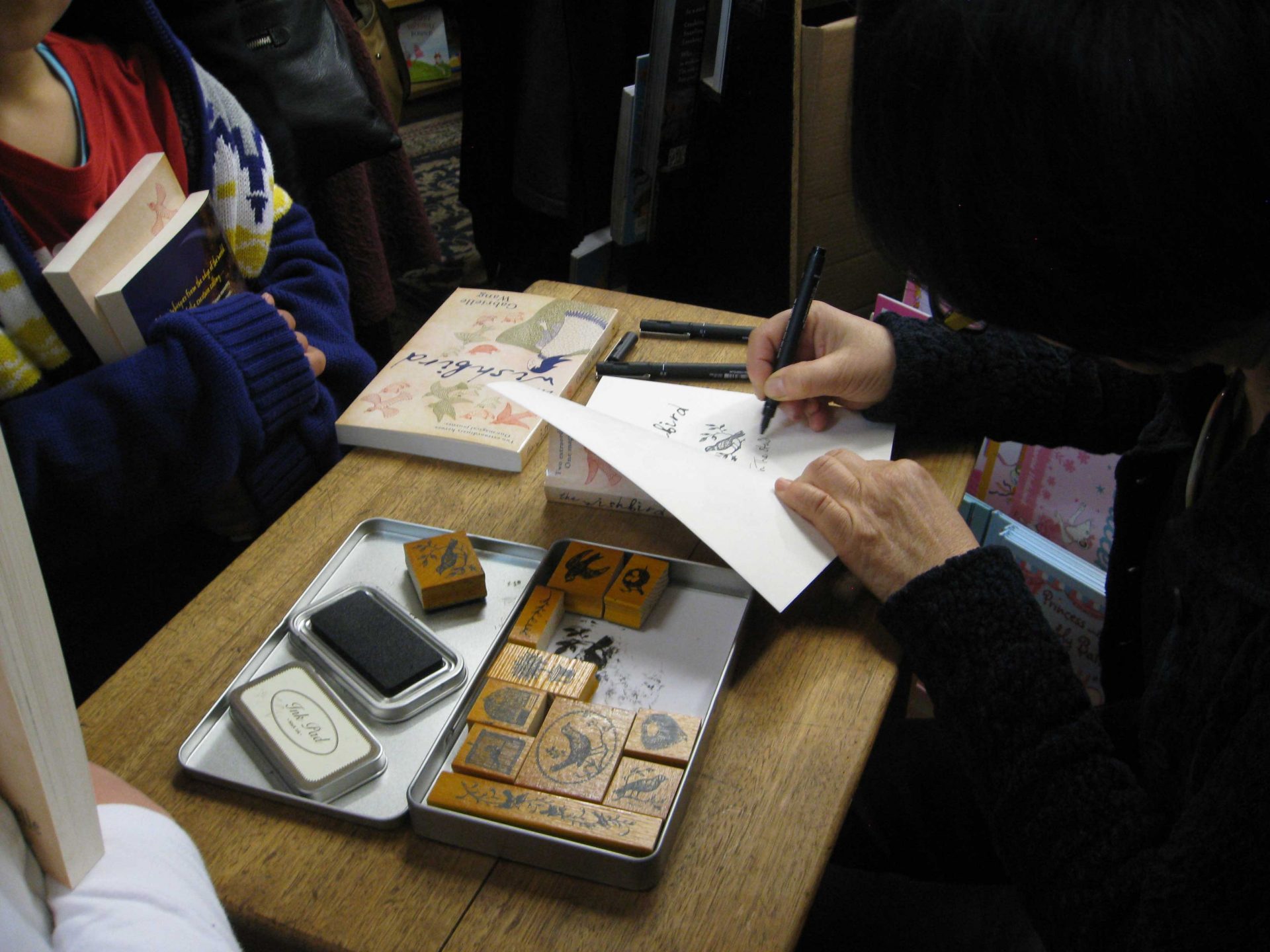 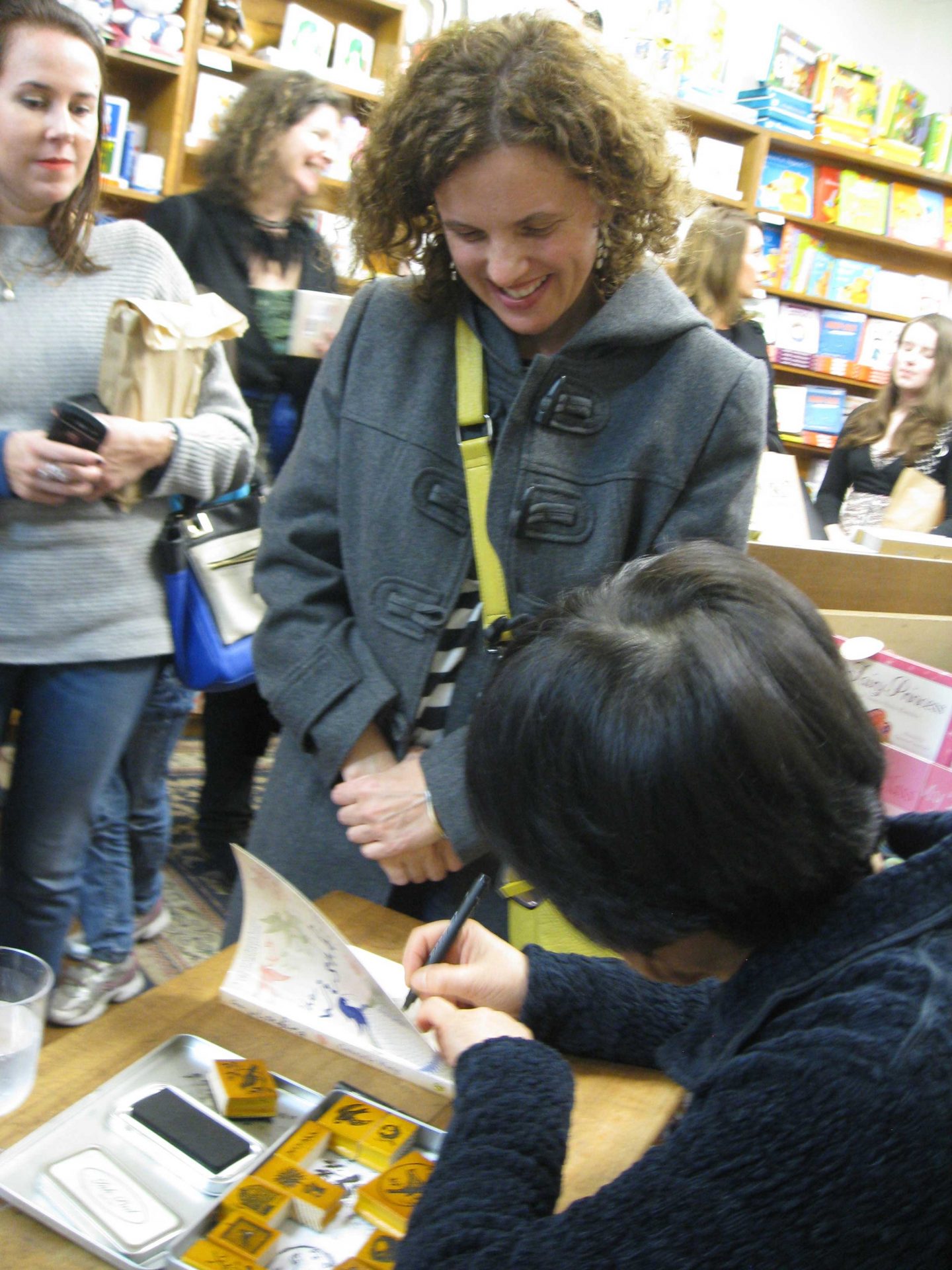 Jermaine with his two signed copies 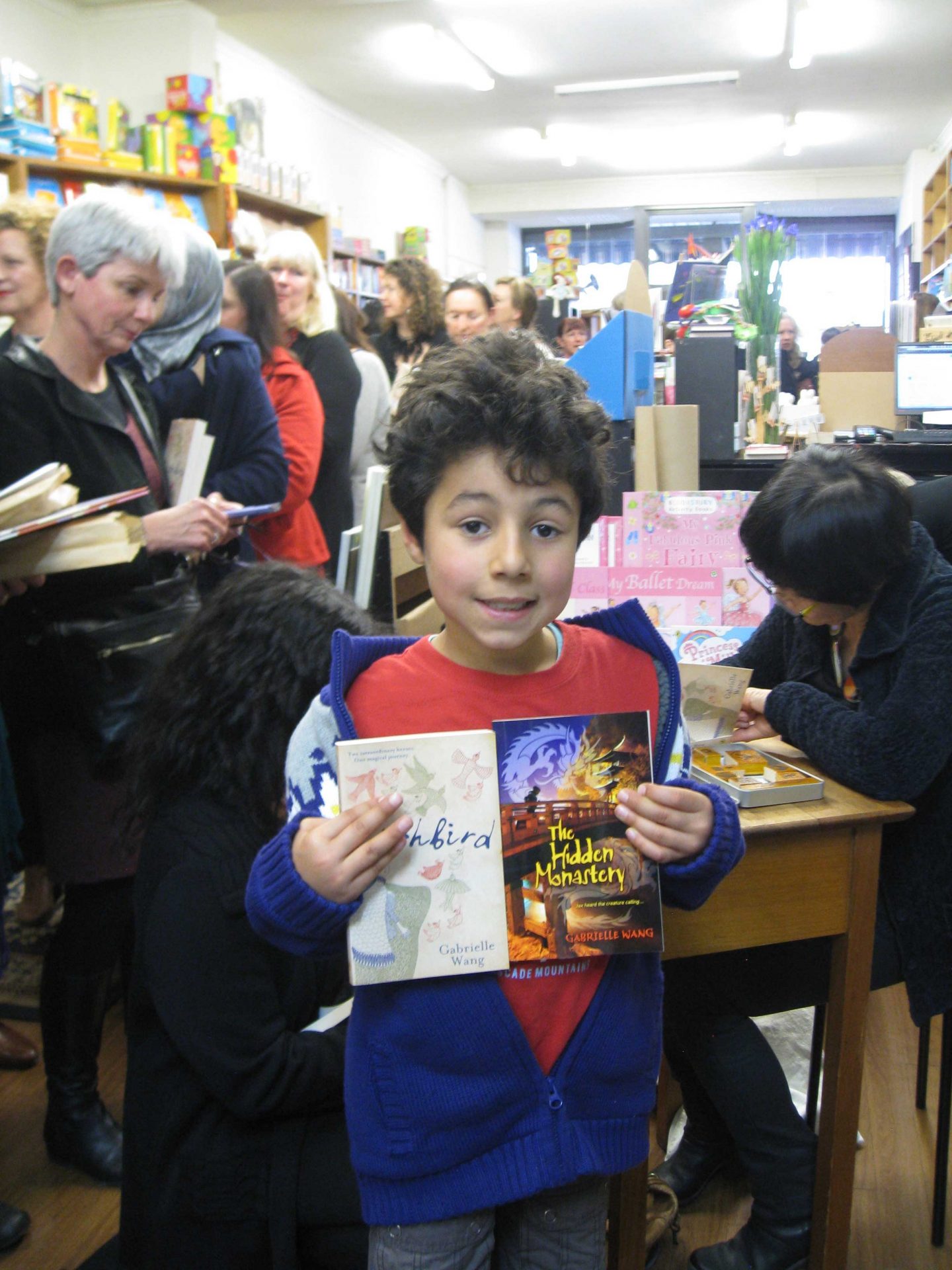 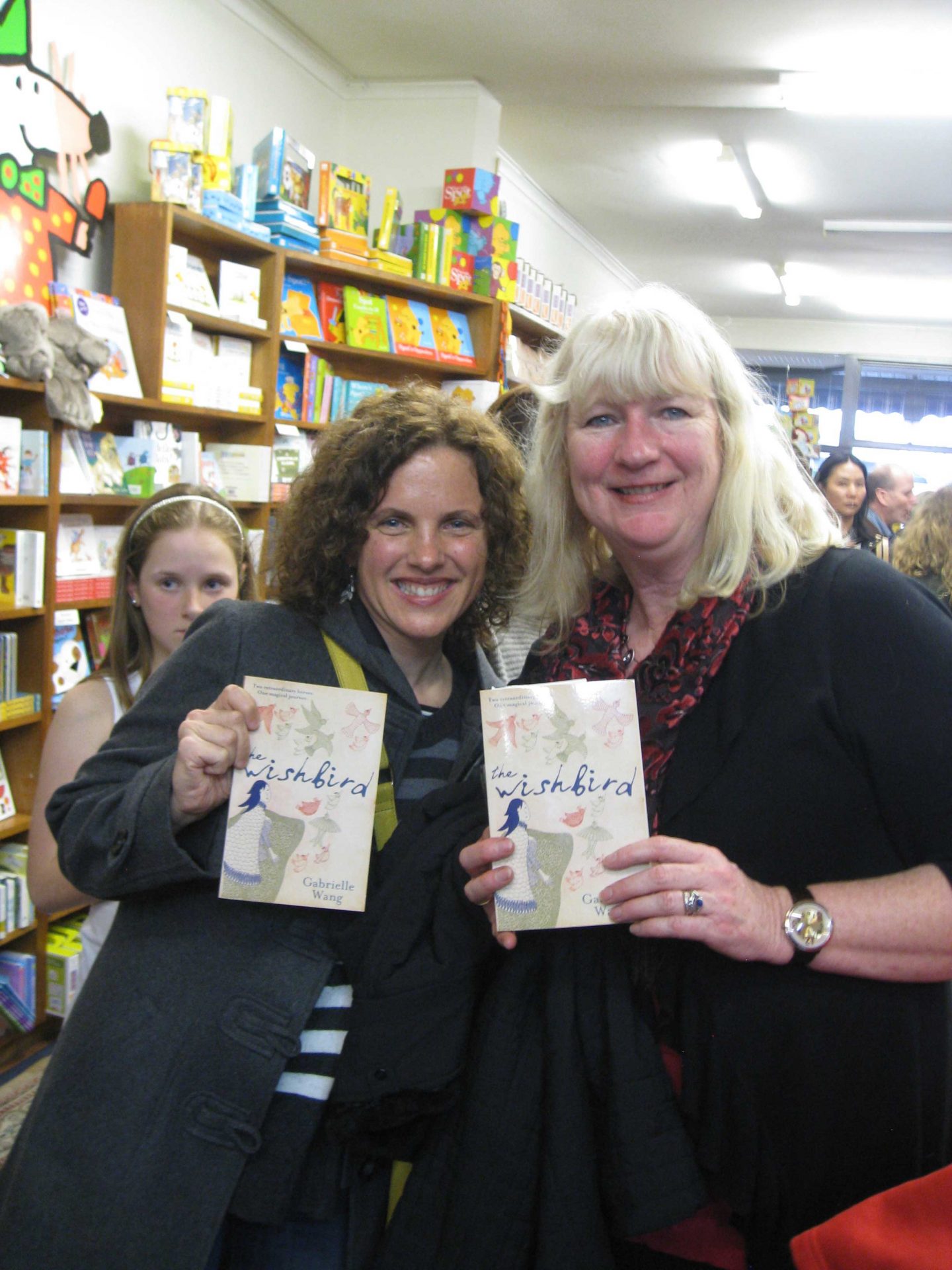 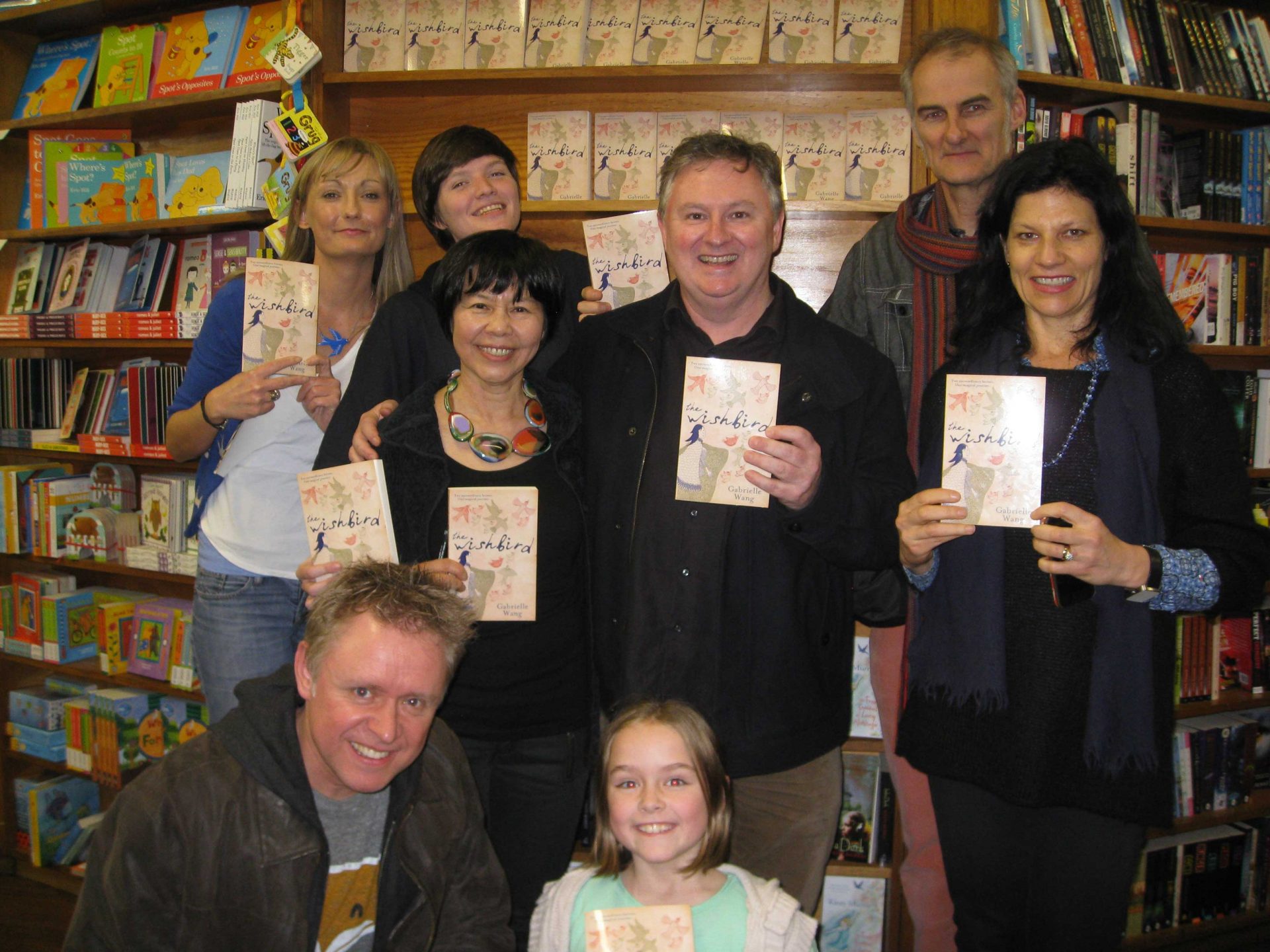 Thank you to everyone who came. Authors who attended but whose photos I didn’t get were Jen Storer, Sherryl Clarke, Meg Mundell, Leanne Hall, Kirsty Murray, Paul Collins, Sophie Torney. I hope I haven’t left anyone out. Thank you to the teachers and teacher/librarians who came too. The children’s book community is such a wonderful and supportive bunch of people. I have the best job in the world! 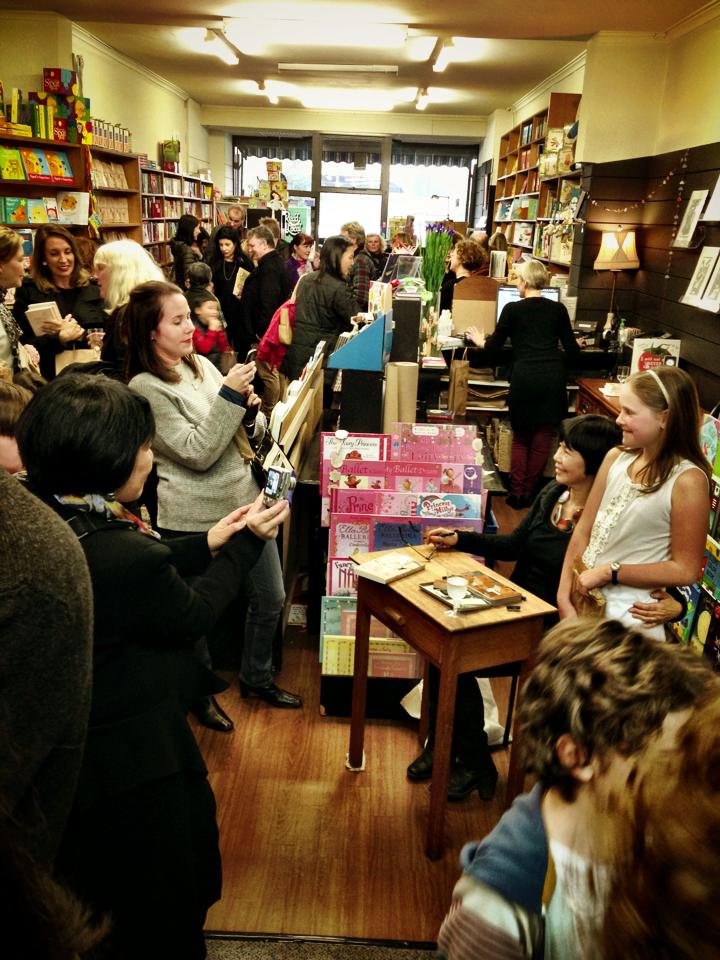 And here is a little Wishbird for you.

PS There are more photos on my Facebook author page