After almost three years the play has arrived! 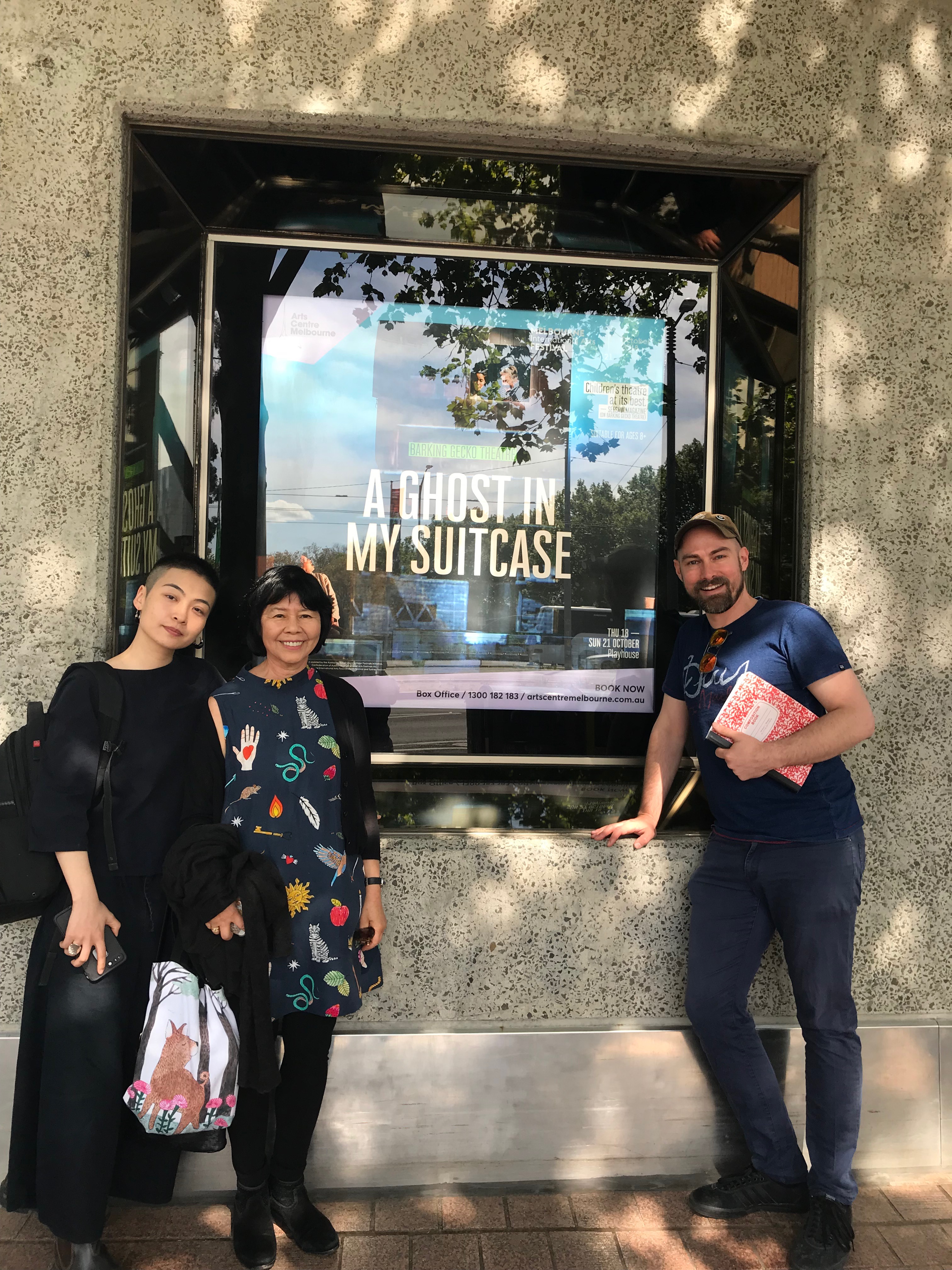 Taken outside the Arts Centre last Monday with Felix Ching Ching Ho, myself and Matt Edgerton

The email that began this incredible journey –

I’m the Artistic Director of Barking Gecko Theatre Company, based in Perth, and I’m writing to enquire about the possibility of adapting A Ghost in my Suitcase for the stage. Our company has a strong history of adapting books for stage productions, including Sean Tan and John Marsden’s The Rabbits (Co-pro with Opera Australia), which won 4 Helpmann Awards in 2015, and Colin Thiele’s Storm Boy (Co-pro with Sydney Theatre Company) which has toured nationally in 2013 and 2015. This is a short clip of the company’s recent work.

I’ve been looking high and low for a great story for the 8 – 12 age group and just came across A Ghost in my Suitcase and I feel it’s going to make a terrific play. It’s a genuinely gripping and moving story with so many layers. I love the family history, the honest depiction of loss, the exciting exploration of cultural customs through the supernatural, the awesome female lead character and the sheer edge-of-the-seat fantasy. I think young people will love it. And a strong female protagonist with Chinese ancestry is really wonderful to put on stage, considering how many stories for young people have anglo boys at the centre of them.

Helen, our CEO handles the logistics of commissioning/royalties etc. but I’d love to have an initial chat with you to see what you think. Please let me know if you’re interested in discussing this further.

I also just read The Wishbird today, which is a beautiful novel as well.

Looking forward to hearing from you.

In my 19 year writing career this would rate as the one of the highlights. The first being an email from Julie Watts who was publisher at Penguin Books Australia telling me that my first novel The Garden of Empress Cassia had been accepted for publication.

To have one’s novel made into a play or a movie is an author’s dream.

The Process – the creative development sessions 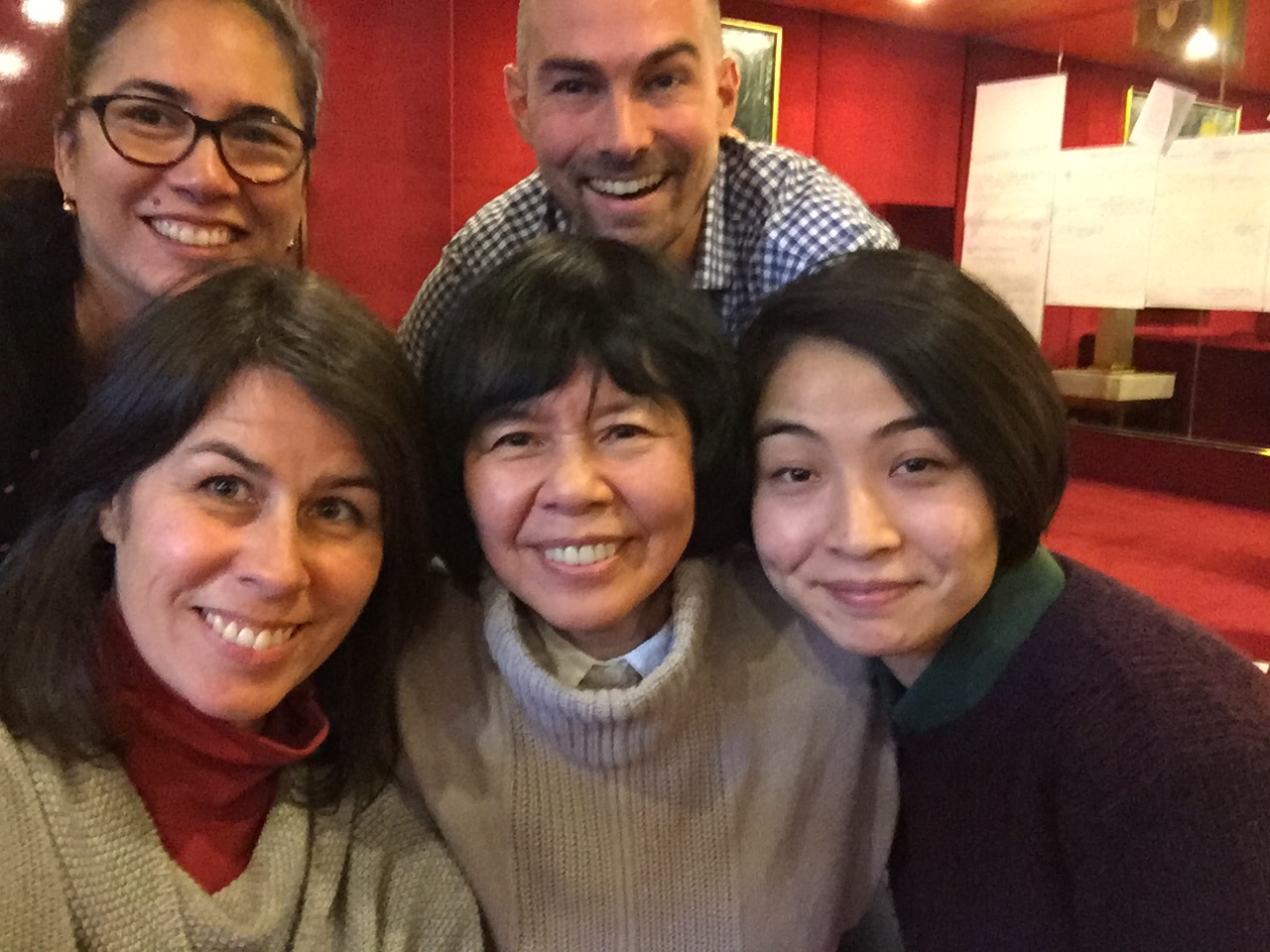 We had a mirrored room in the Arts Centre and over four solid eight-hour days we analysed every part of the novel, breaking down each main character, their actions and underlying motives, where the conflict lay, (because in theatre there needs to be conflict in every scene), the major ghost fighting scenes, the main character, Celeste’s epiphanies, her arc and her protagonist, Ting Ting’s arc. I brought in some texts to share on Daoism as this philosophy underpins a lot of my work. One of the best is Ursula K Le Guin’s interpretation called Lao Tzu : Tao Te Ching : A Book About the Way and the Power of the Way. 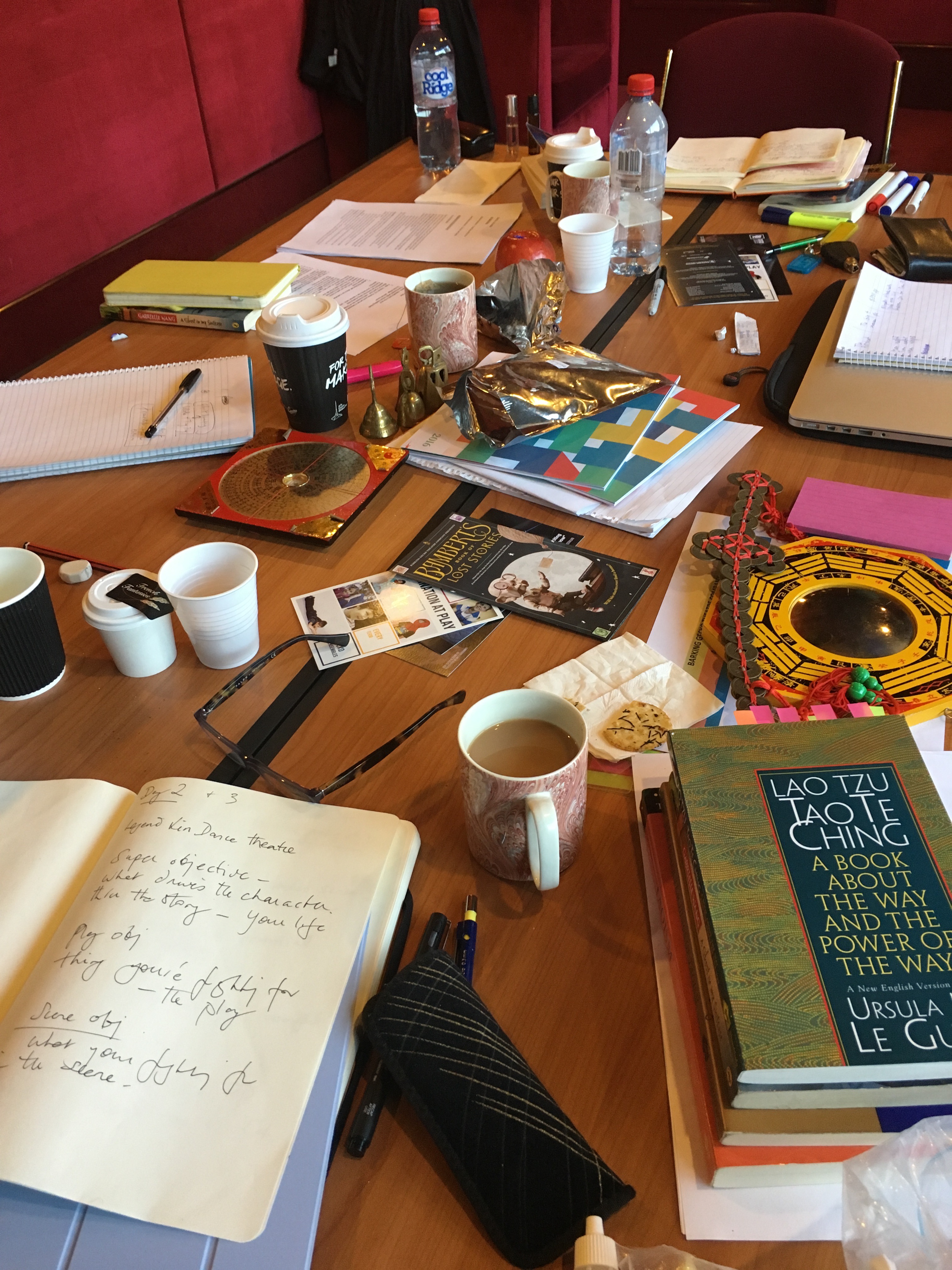 Sometimes I had to pinch myself to think that we were discussing a story that I had imagined and in such depth.

Each day we began with me reading from the Tao Te Ching while everyone lay on the floor. Then I showed them some taiqi exercises.

Matt stuck up A2 sheets with headings and we all went around the room filling in these sheets with things from the book. It was such a clever way to unpack the novel. 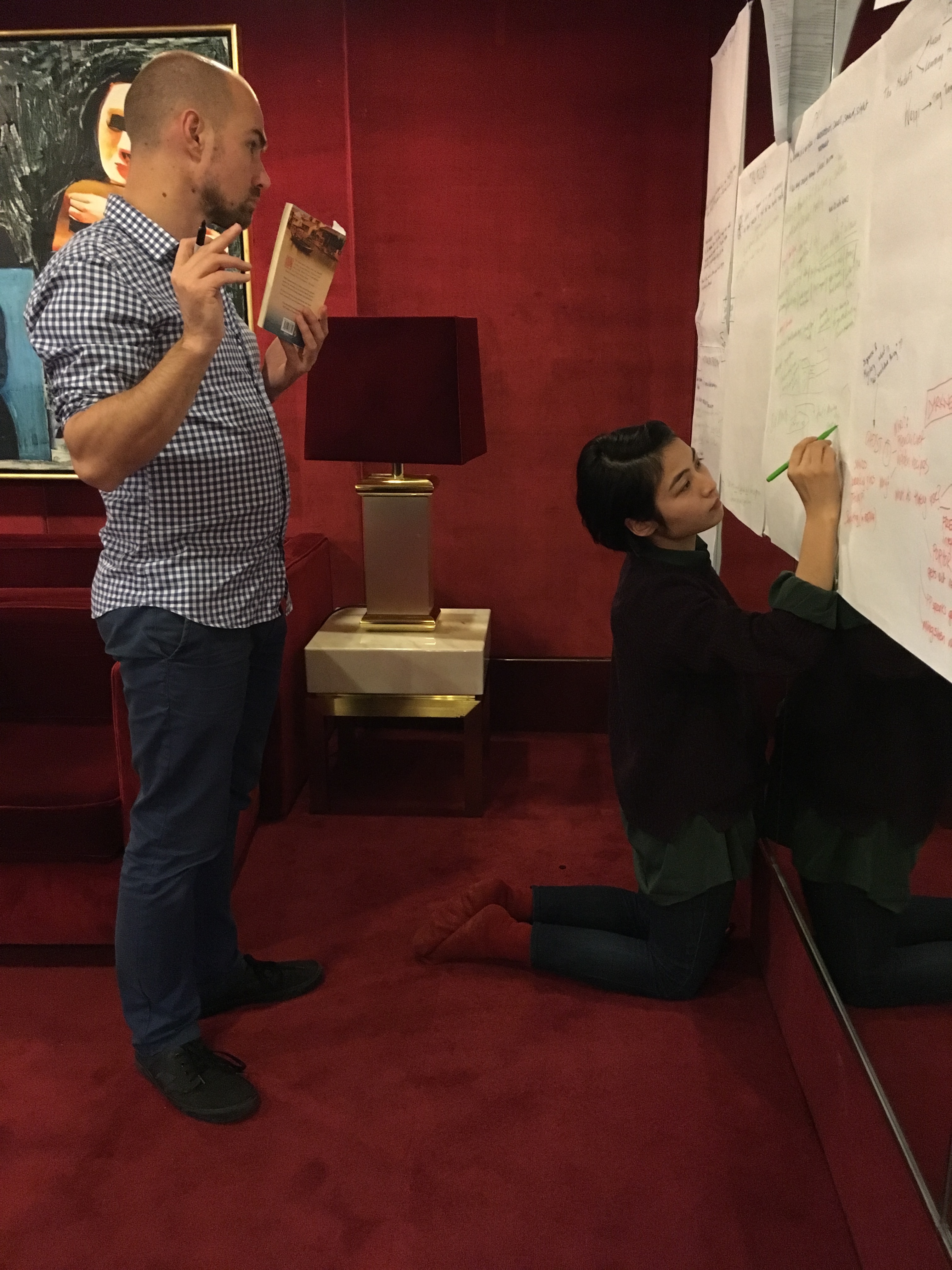 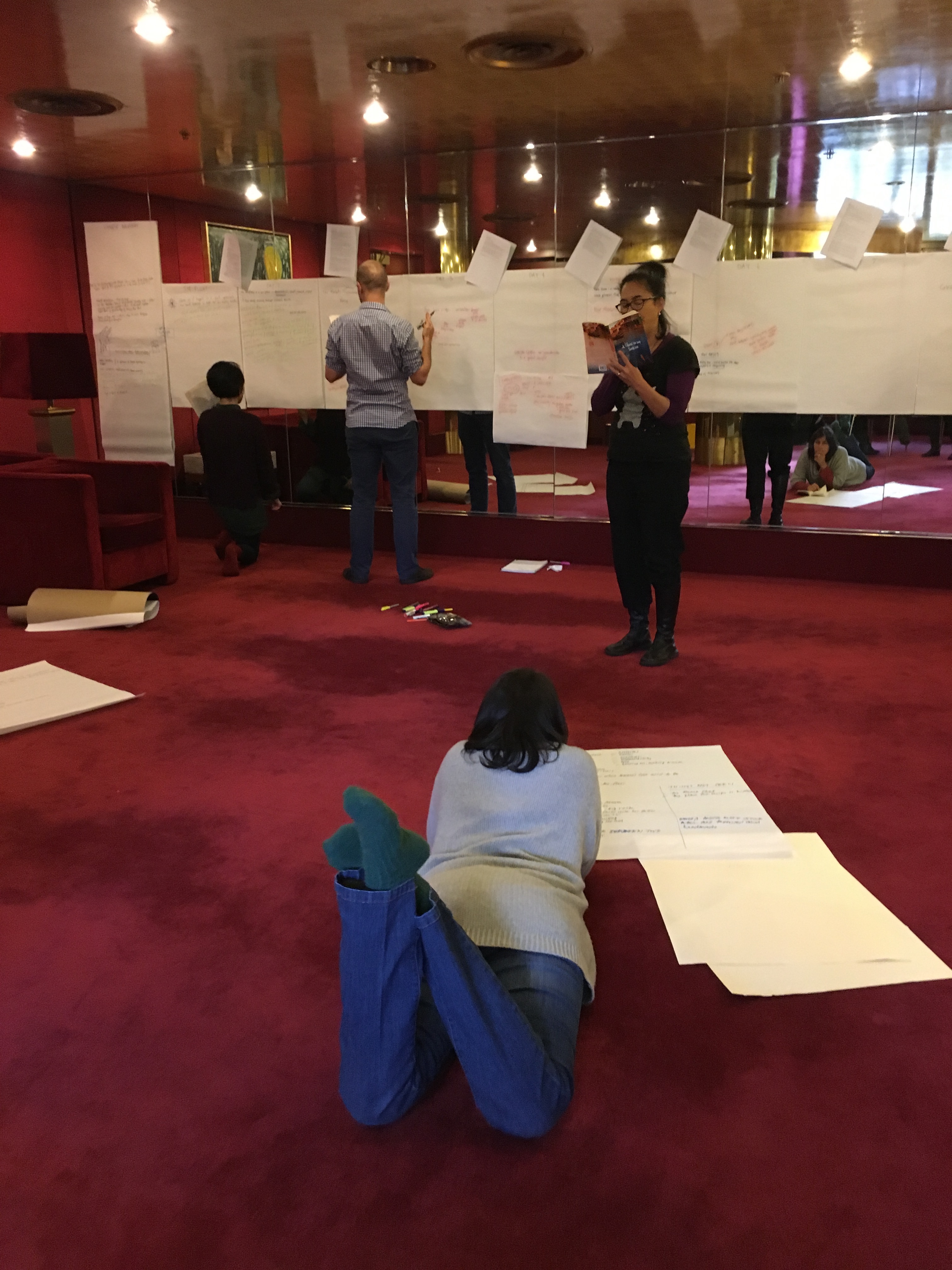 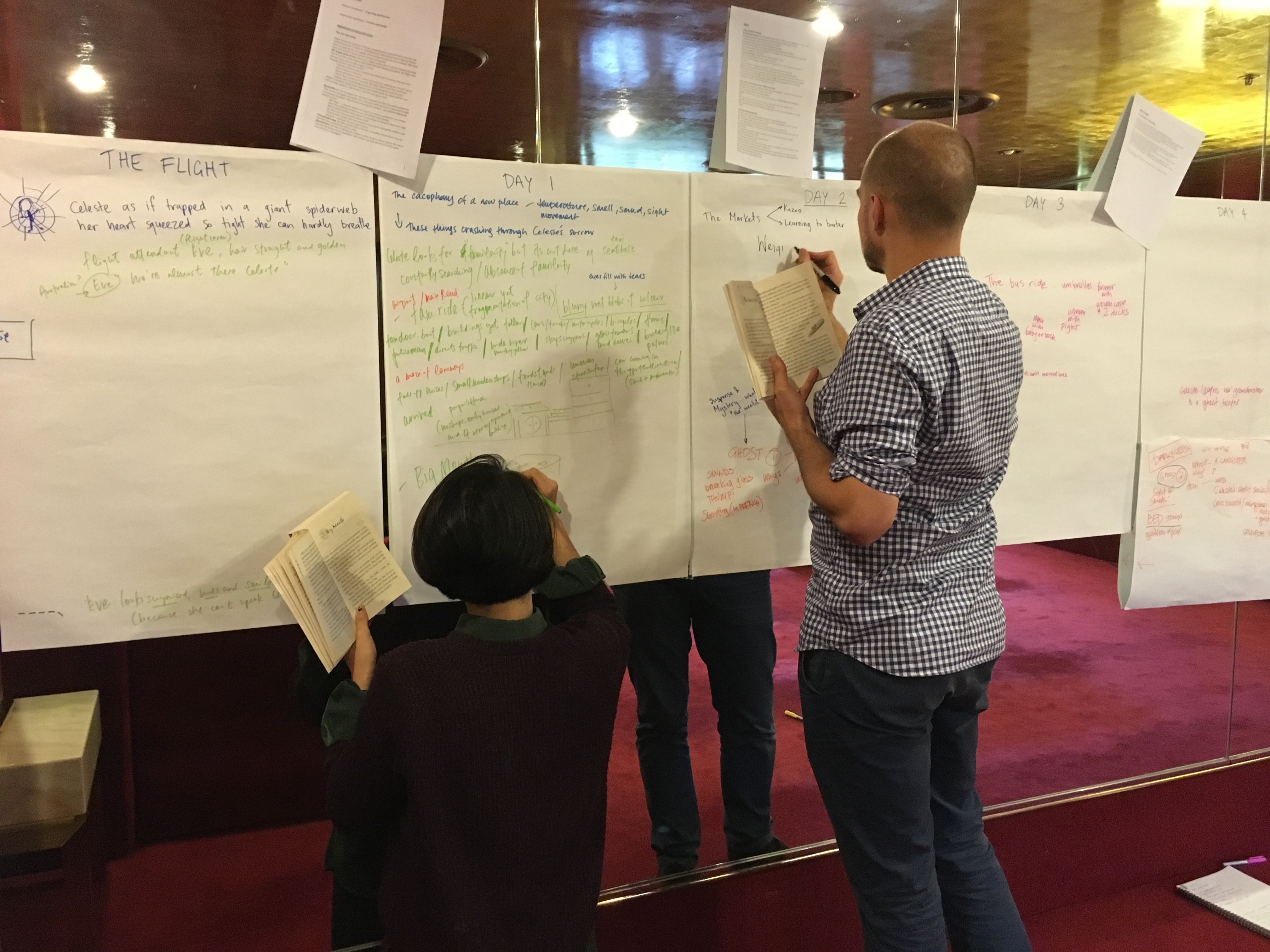 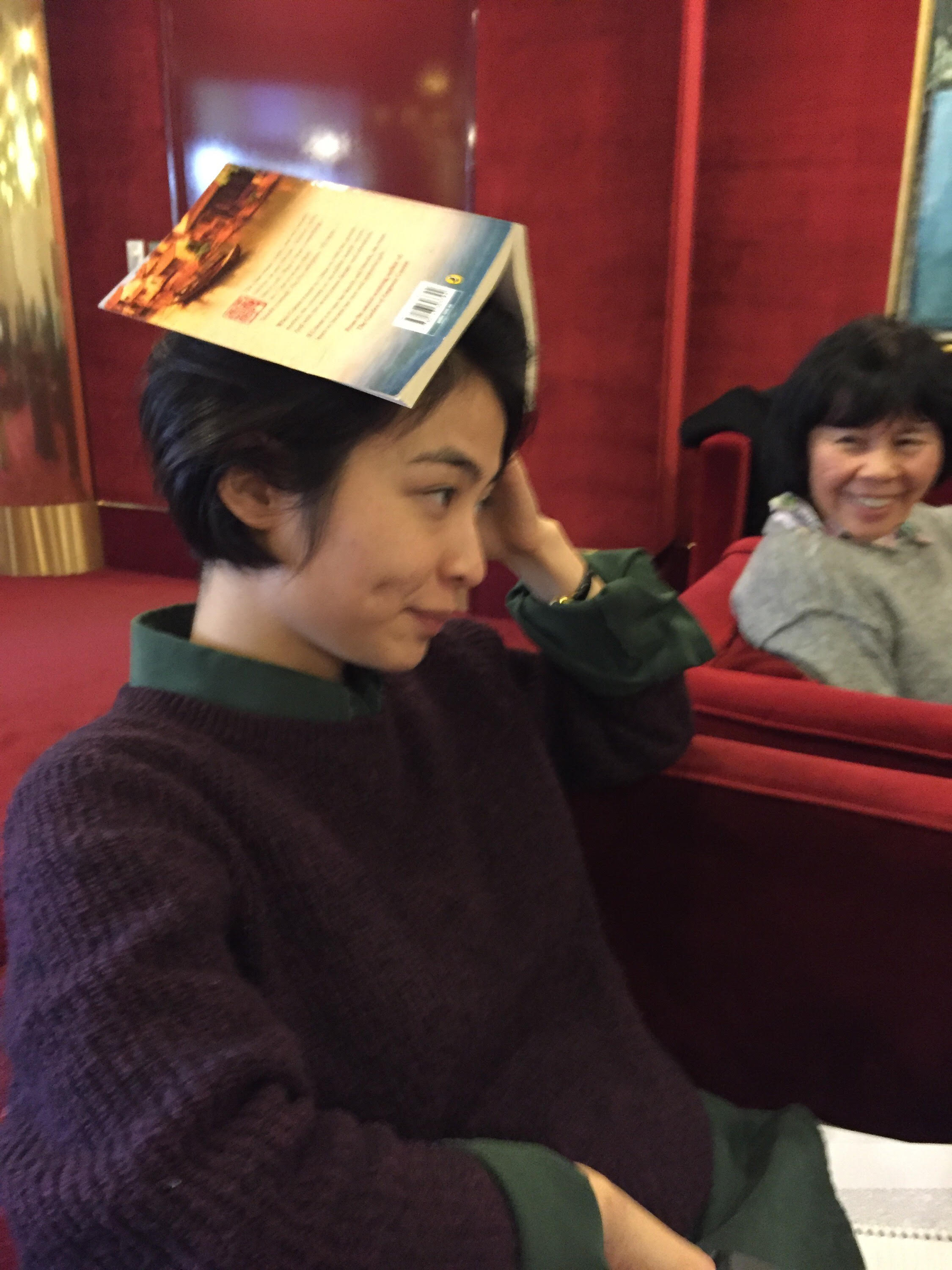 Felix trying the new trick of absorbing the novel through her head.

Here are some sample sheets. 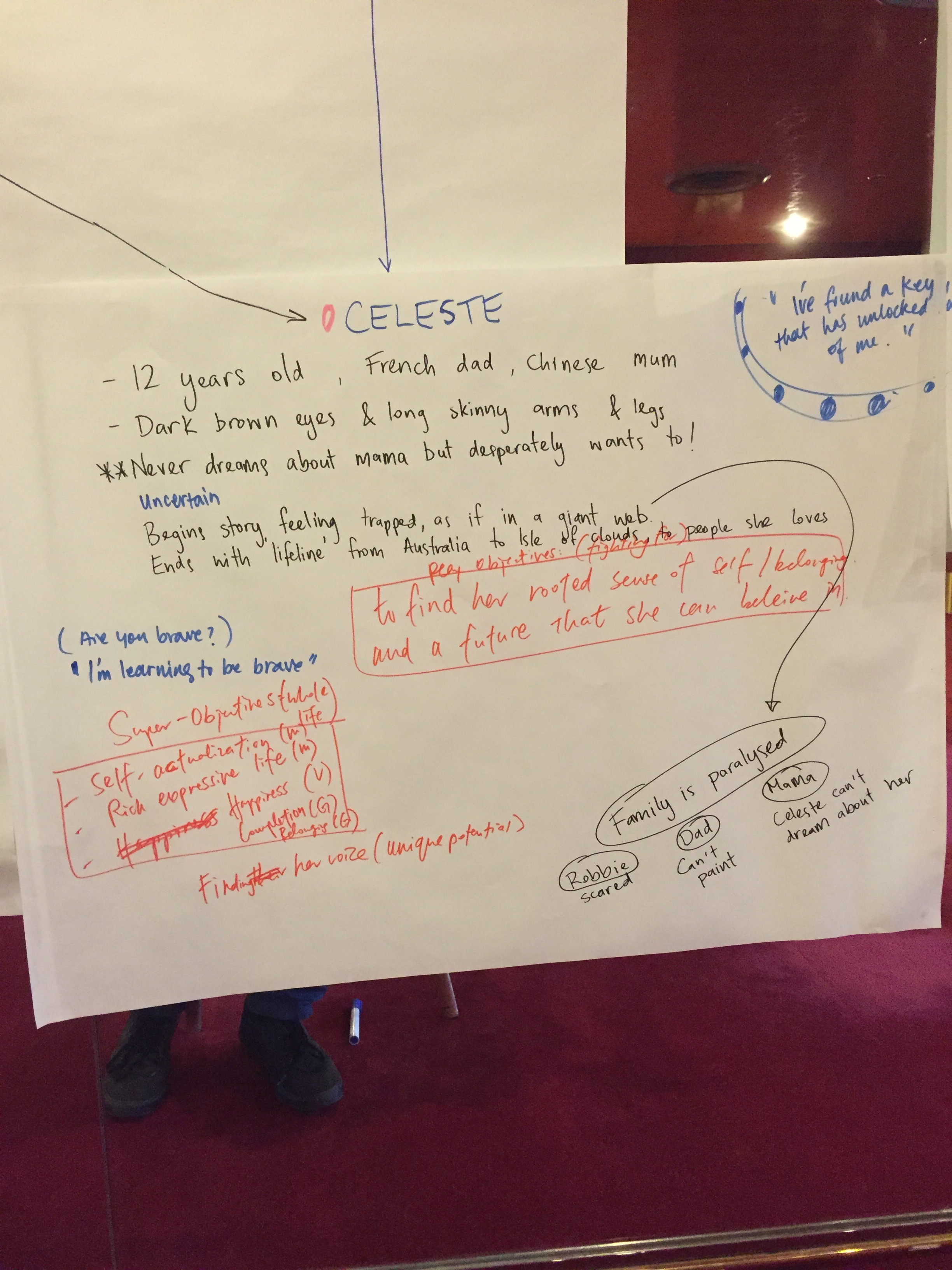 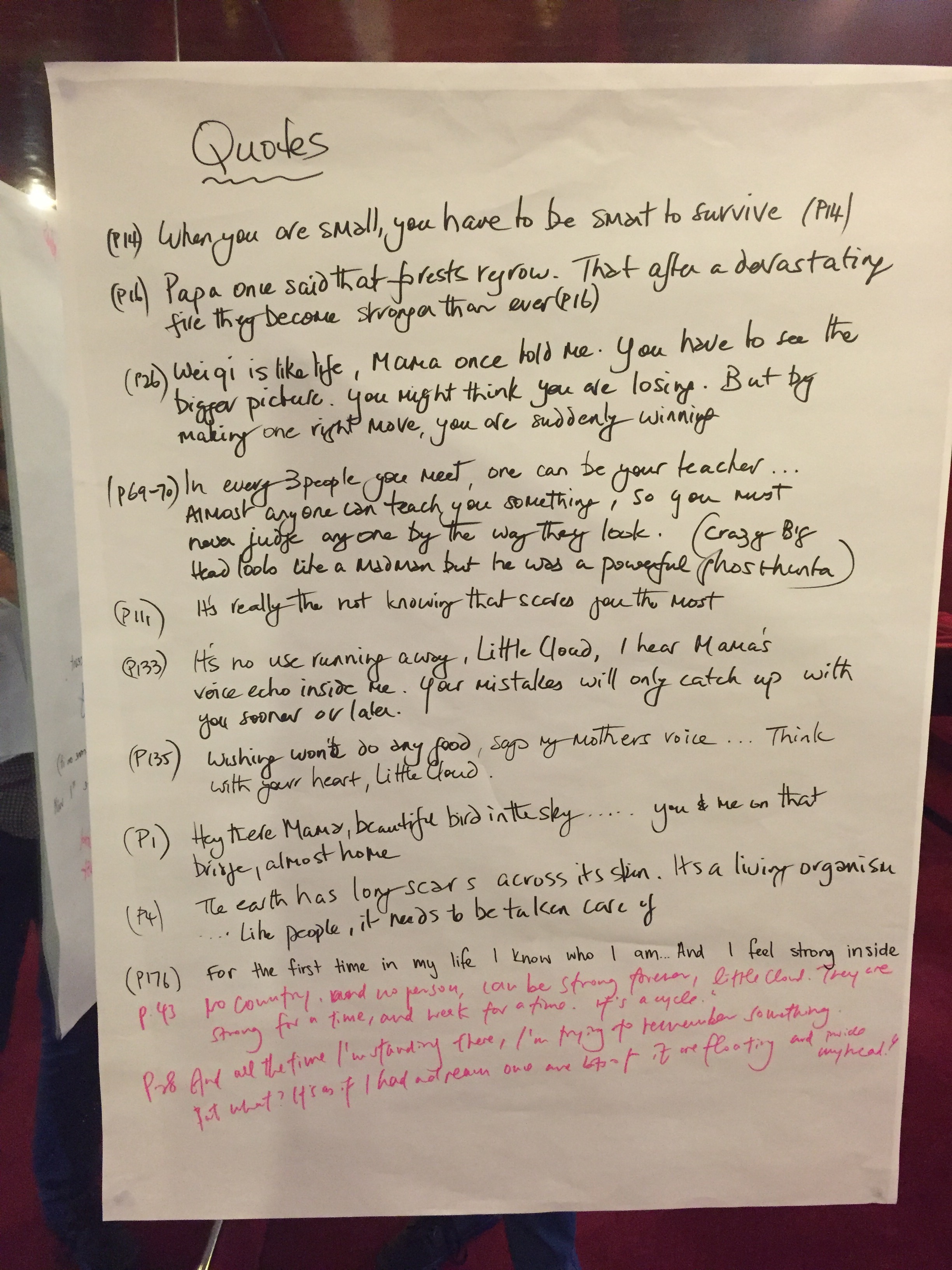 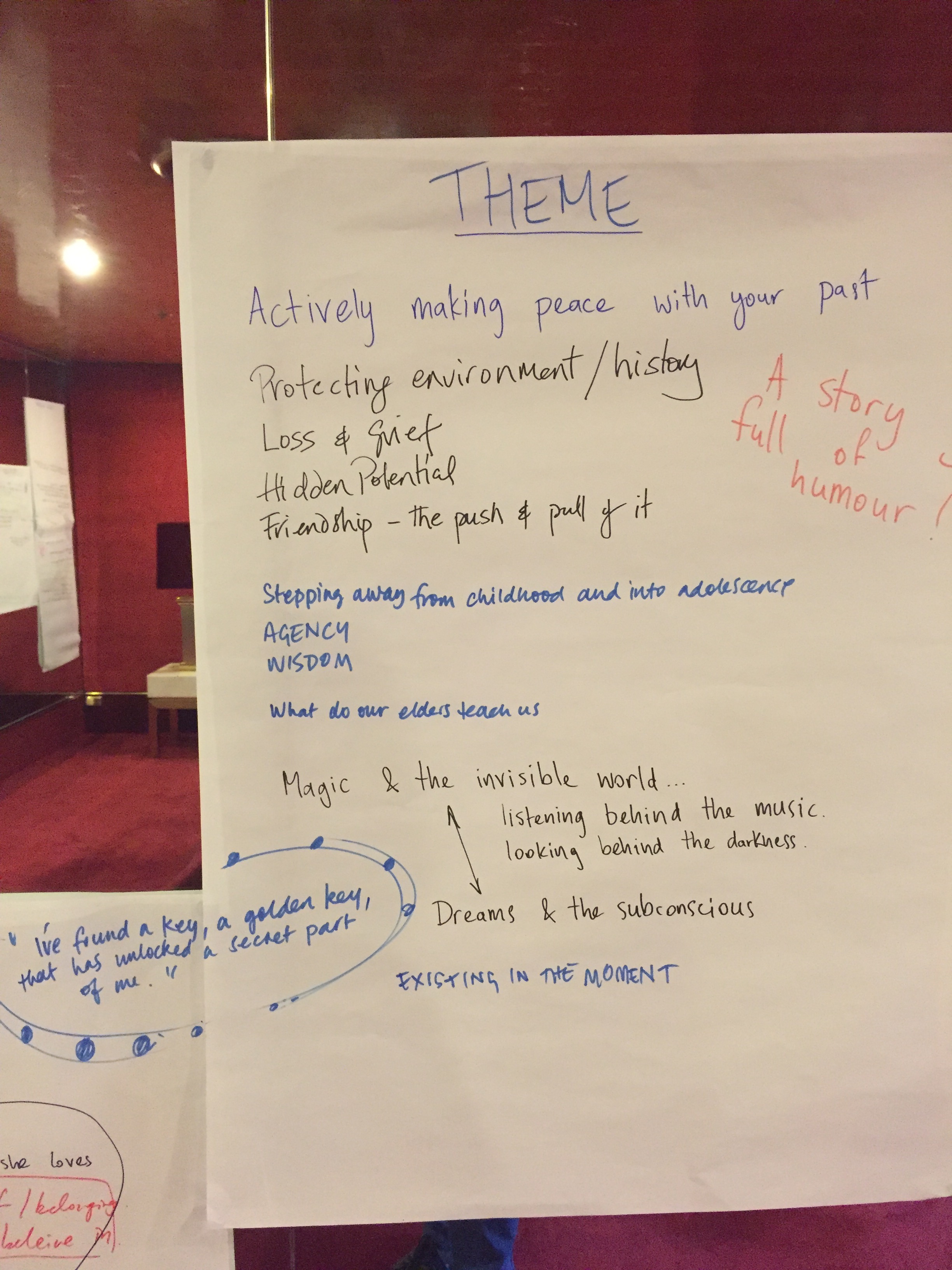 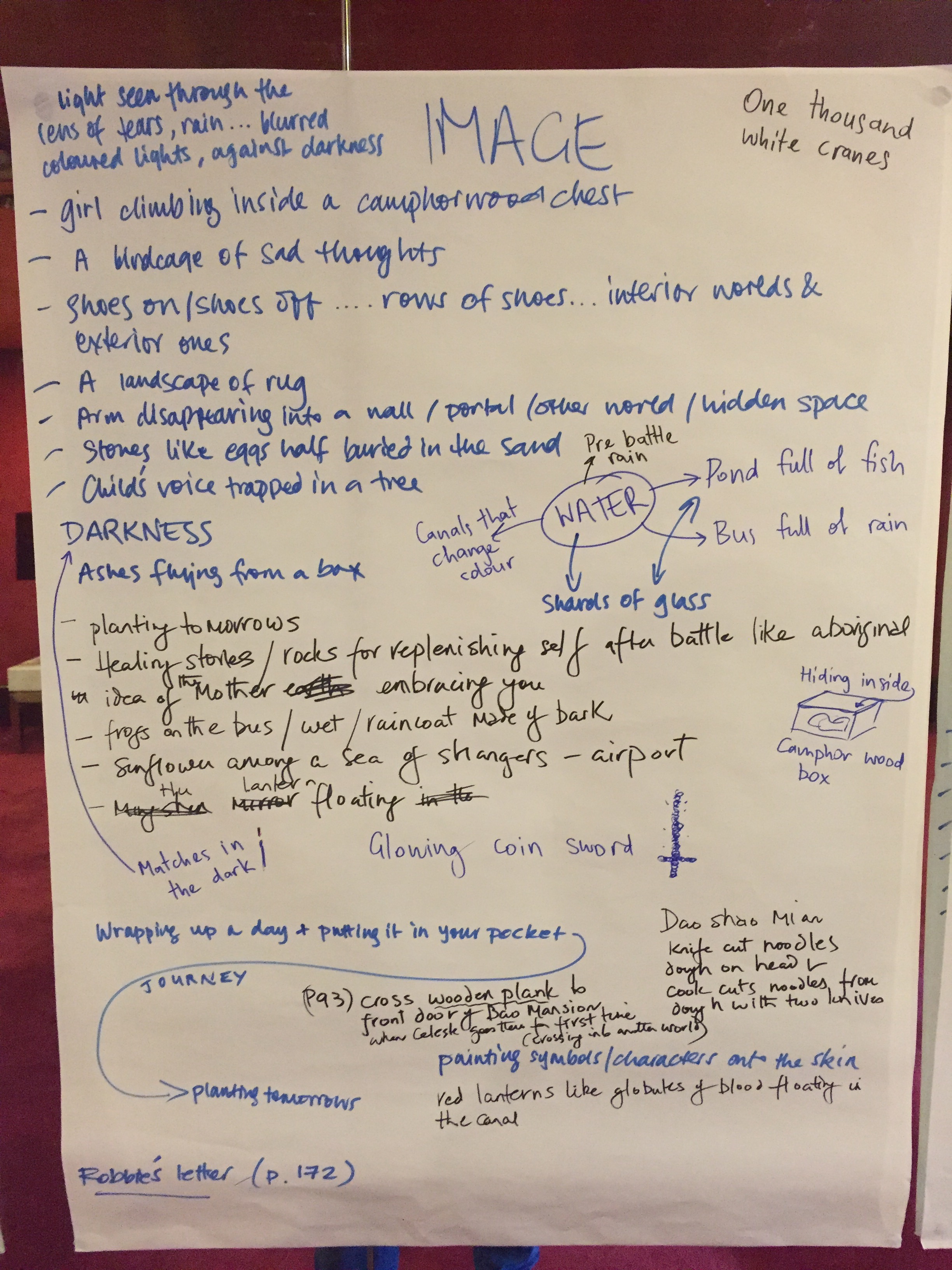 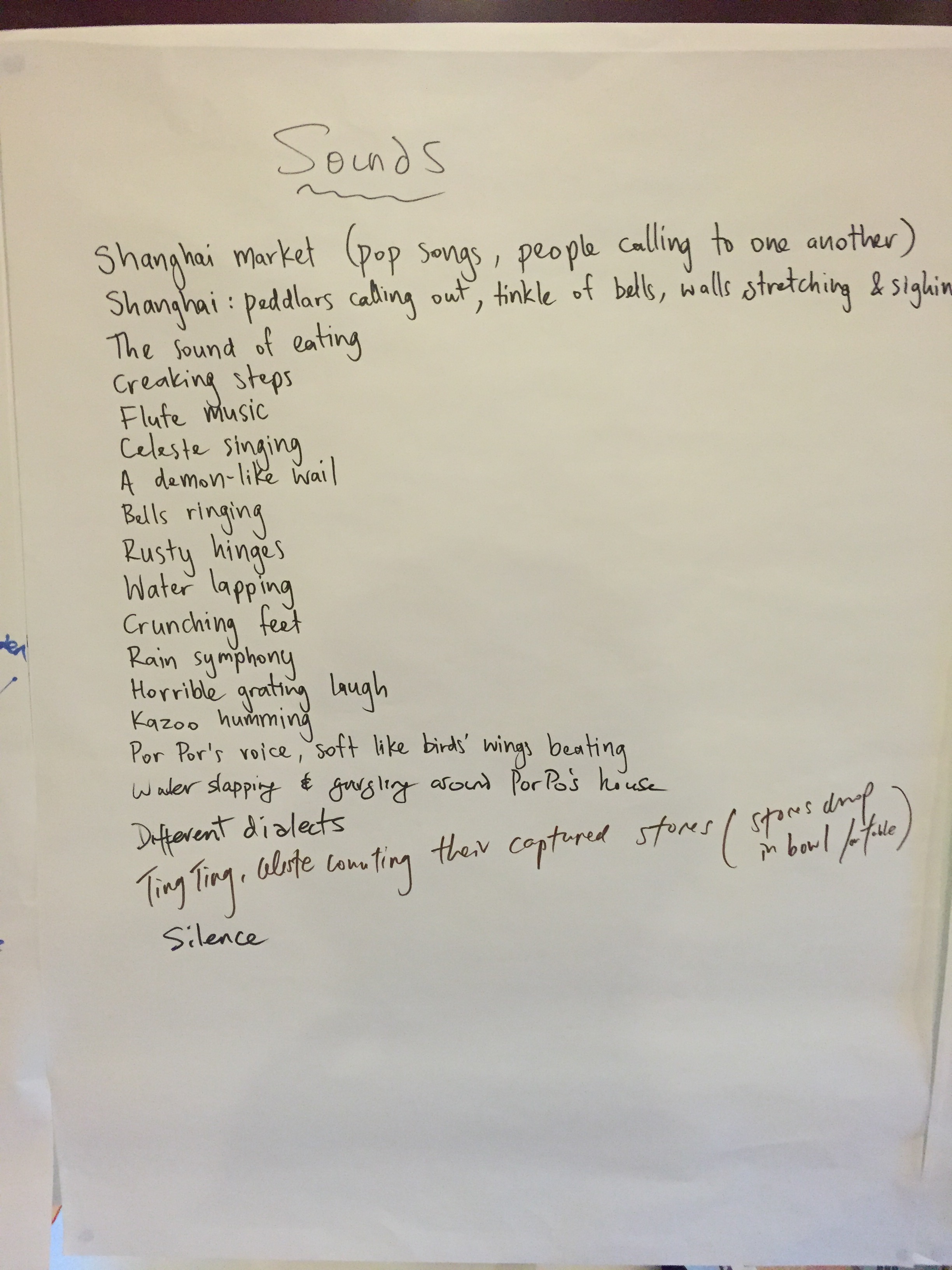 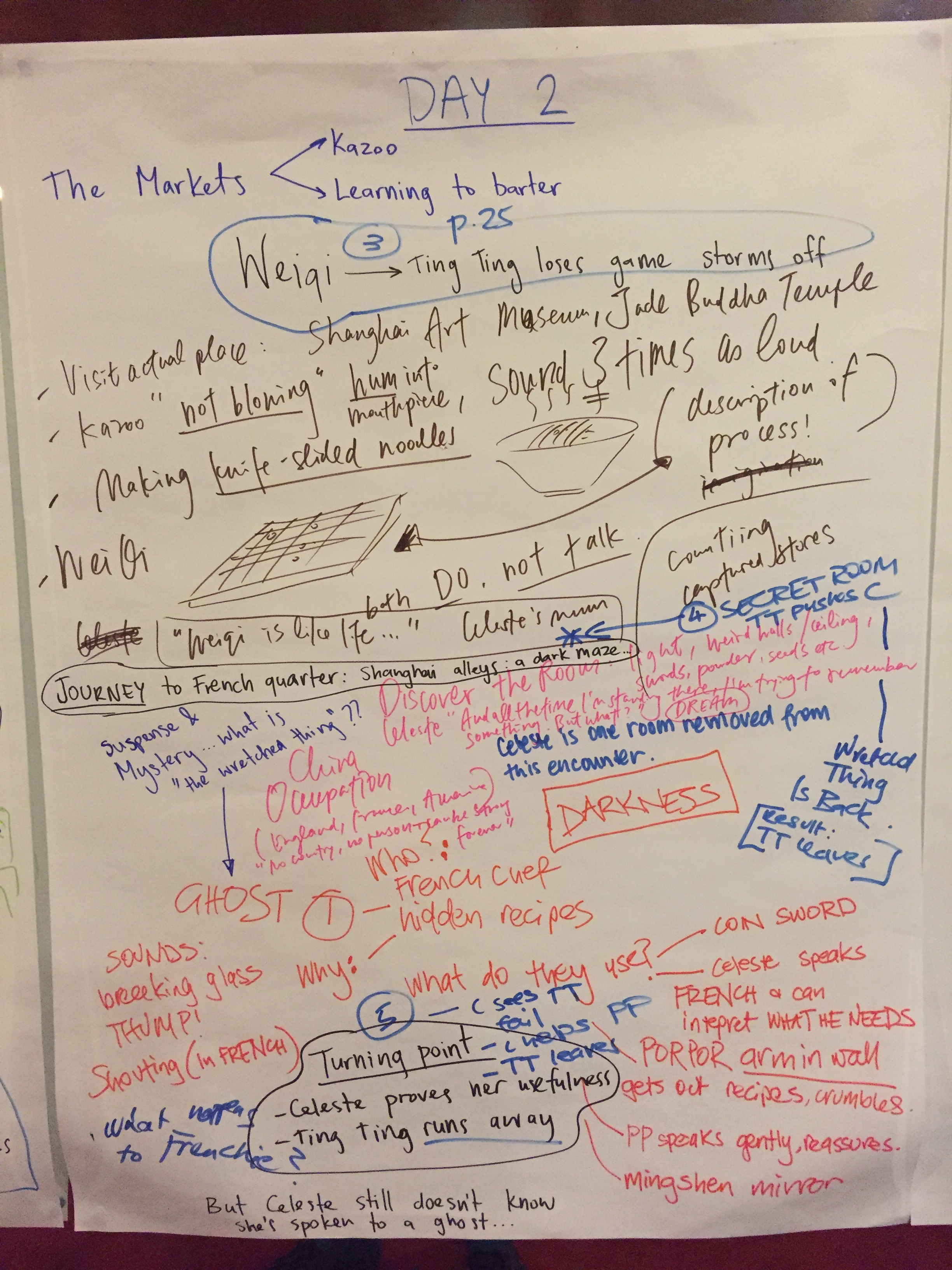 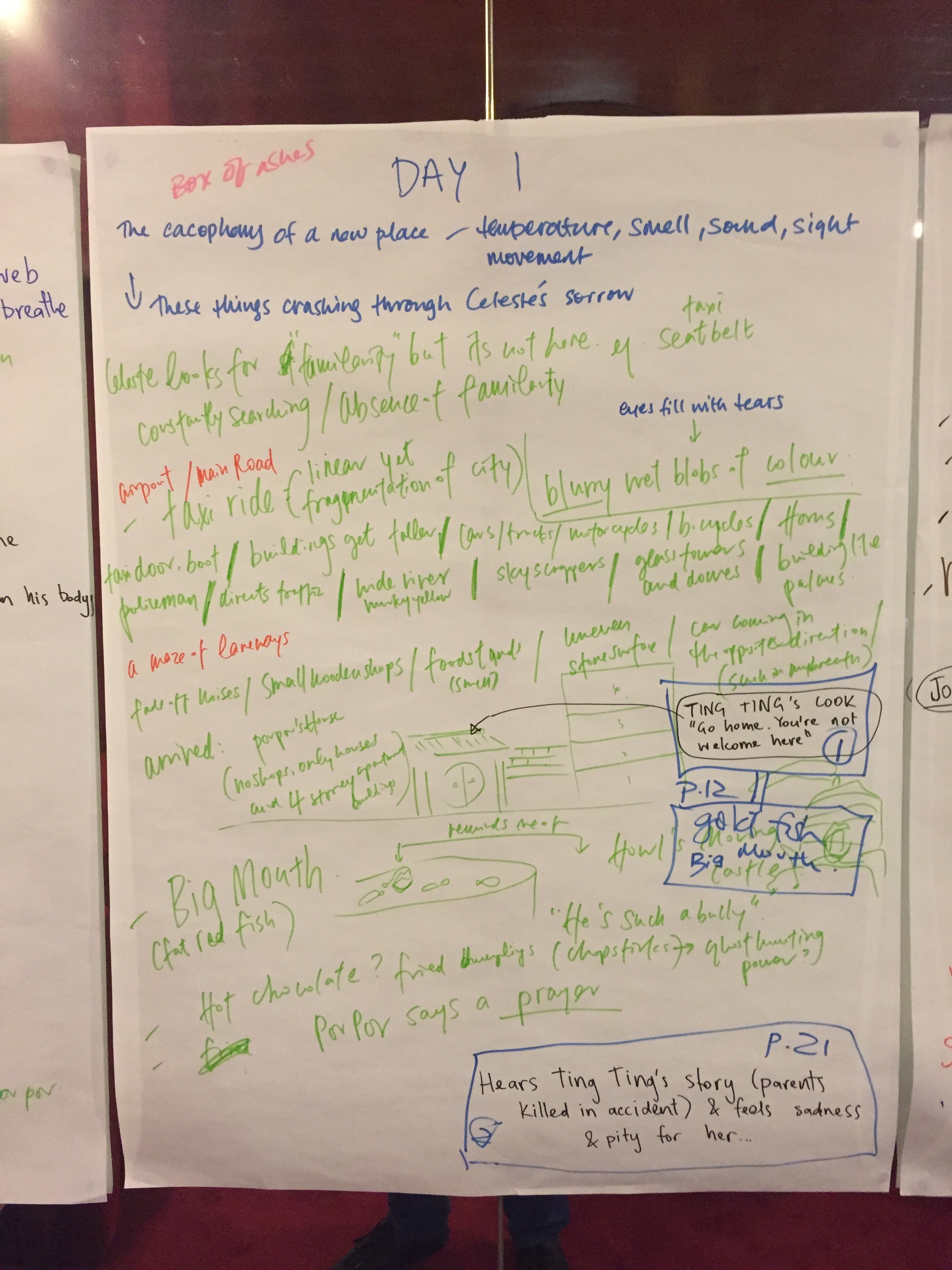 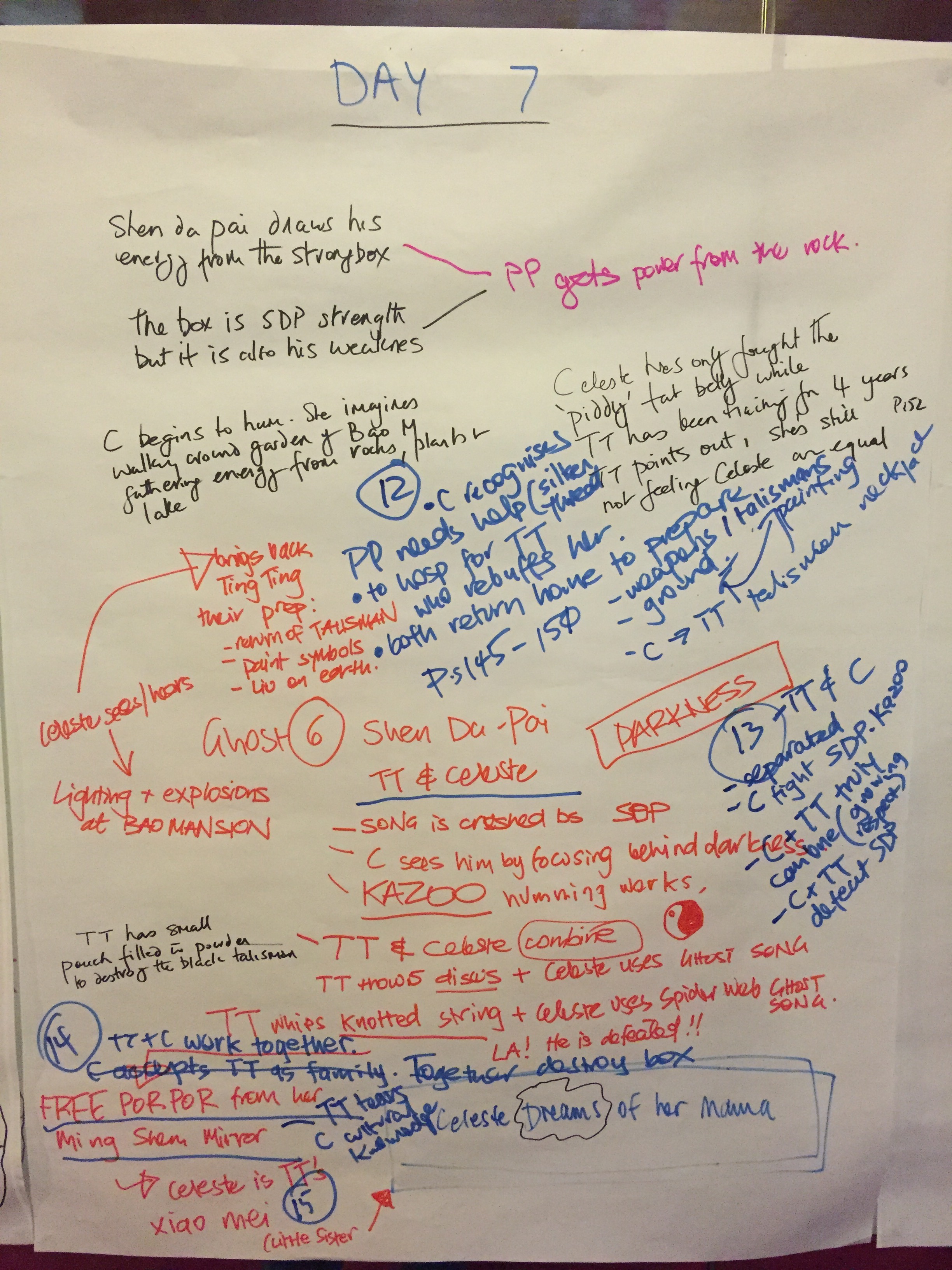 I discovered some surprising insights through this process. For example I never realised that all the ghosts that I had created were male. It certainly was not intentional. Another discovery was how boxes play such a big part in the story. And also rain and water and mud.

I came out of the four days realising that much of writing fiction is intuitive. Our subconscious is making small but important connections that the writer is not aware of.

For me that was the most important thing I learned. Trust your intuition. You may not realise why you’re including a certain element but in the bigger context it can be meaningful and thereby add depth to your story.

It was in these sessions too, that I found how much Ting Ting, one of the antagonists needed a story of her own. She had so many problems to work through, she was perfect as a heroine.

And so I wrote the sequel, Ting Ting the Ghosthunter which was published last month. 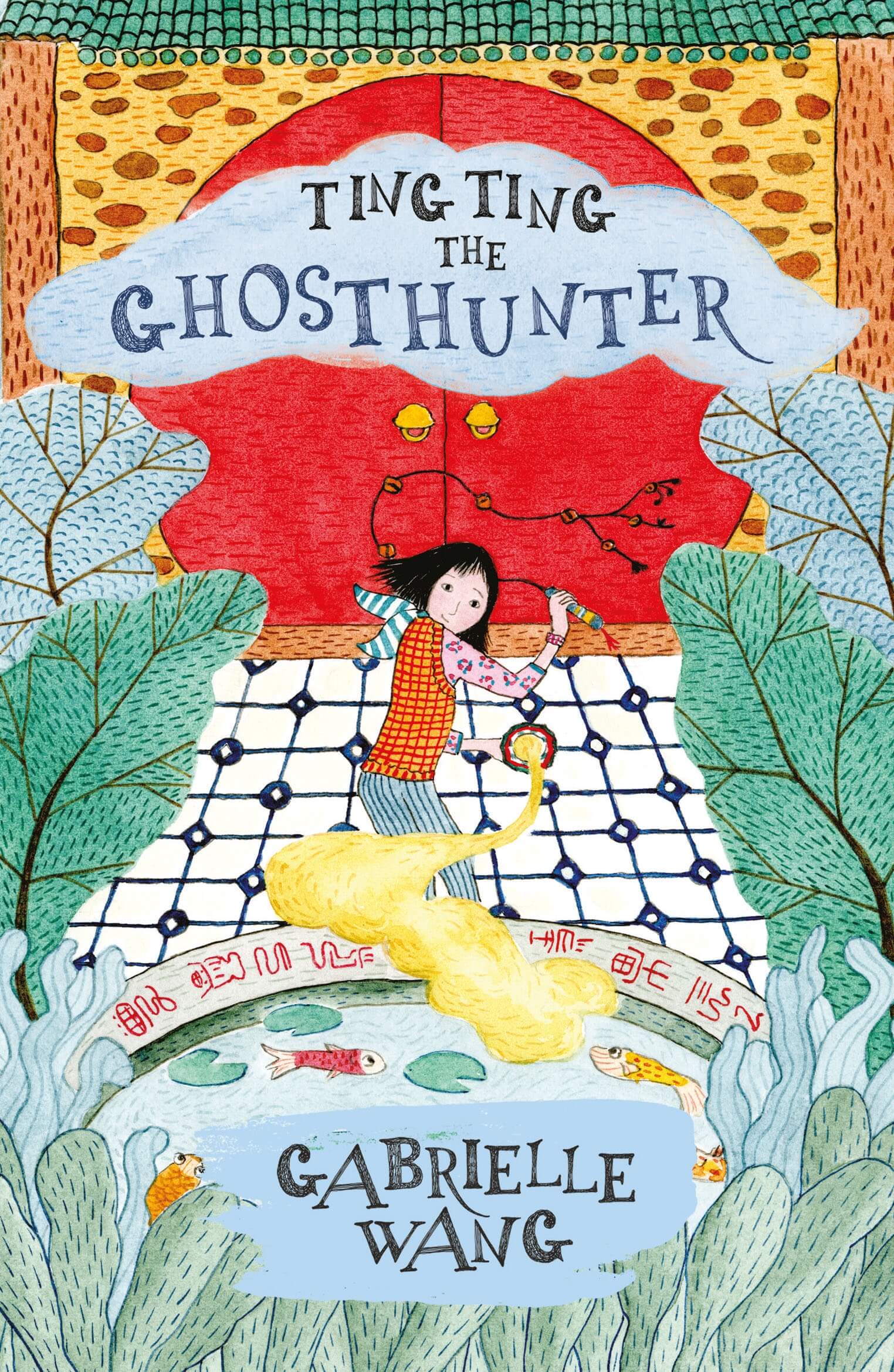 Notes made in the creative development sessions

I have included these because some authors maybe interested to know how plays are developed.

WHAT IMAGES STAND OUT IN YOUR MIND?

In all plays this is how they break down the story

What drives the character through the story?

A Ghost in My Suitcase – Celeste’s (protagonist) super objective is self actualisation, to find happiness, completeness

Ting Ting’s (antagonist) super objective is to find family, a place to belong

Por Por’s (guardian) super objective is to be responsible for the power she was given, to find a worthy person to take over

The thing the character is fighting for

A Ghost in My Suitcase – Celeste’s play objective – To find her own rooted sense of self and with a future she can believe in. Uncovering her essential self, her nature.

What are the obstacles that stand in Celeste’s way?

Celeste has to journey alone, lack of knowledge of being a ghost hunter, being a stranger in Shanghai, against a powerful ghost, culture shock

Ting Ting’s play objective is to find family and love, to get things back to the way they were

What are the obstacles that stand in her way?

Thinks she is being replaced

What the character is fighting for in each scene

Our next get together was a trip to China two years ago exactly. How do I know this? Because it came up today in my Facebook timeline. Matt, Felix and I travelled for ten days to Shanghai and surrounding water towns.

I was lucky to be invited along as cultural consultant. 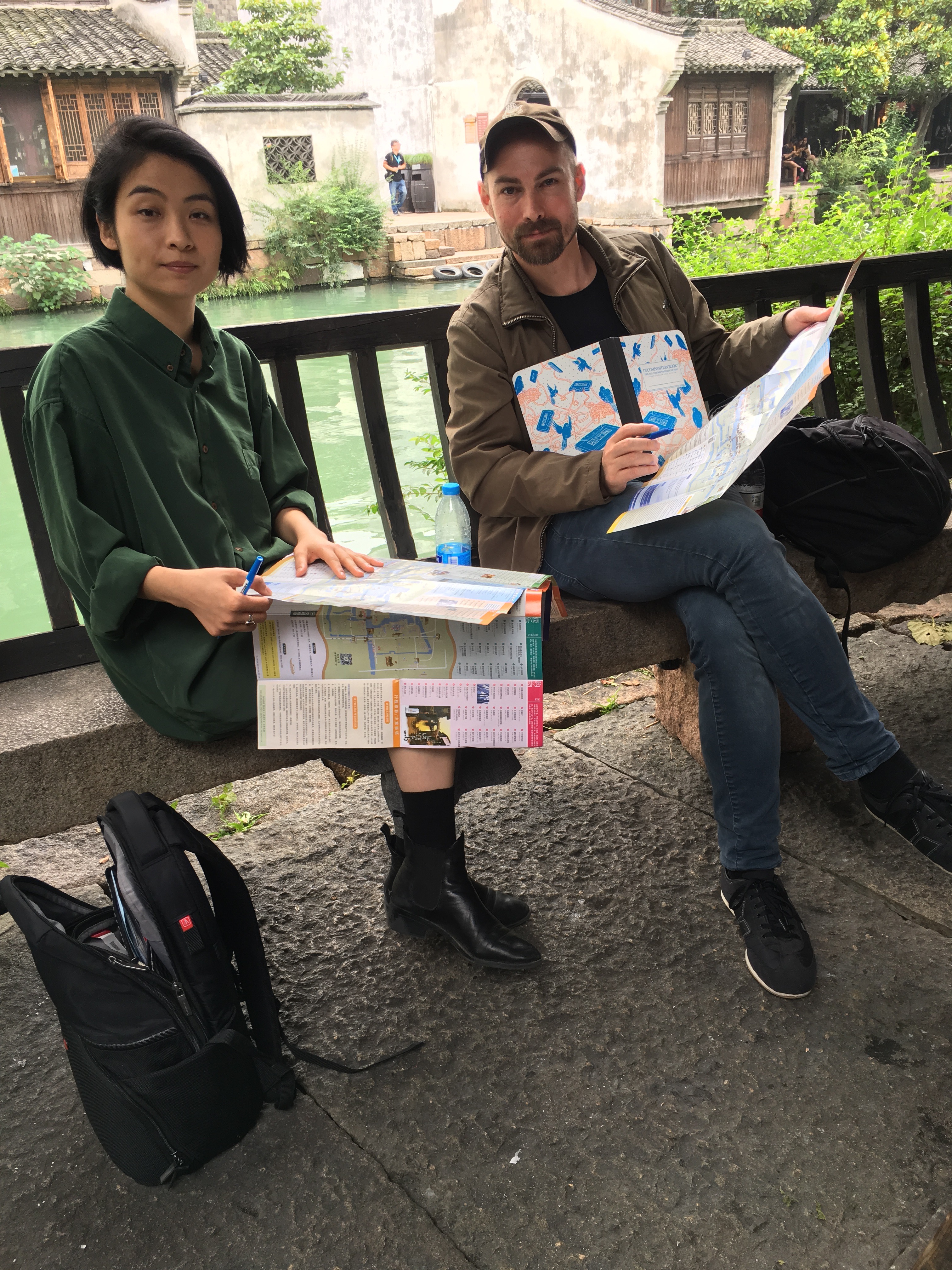 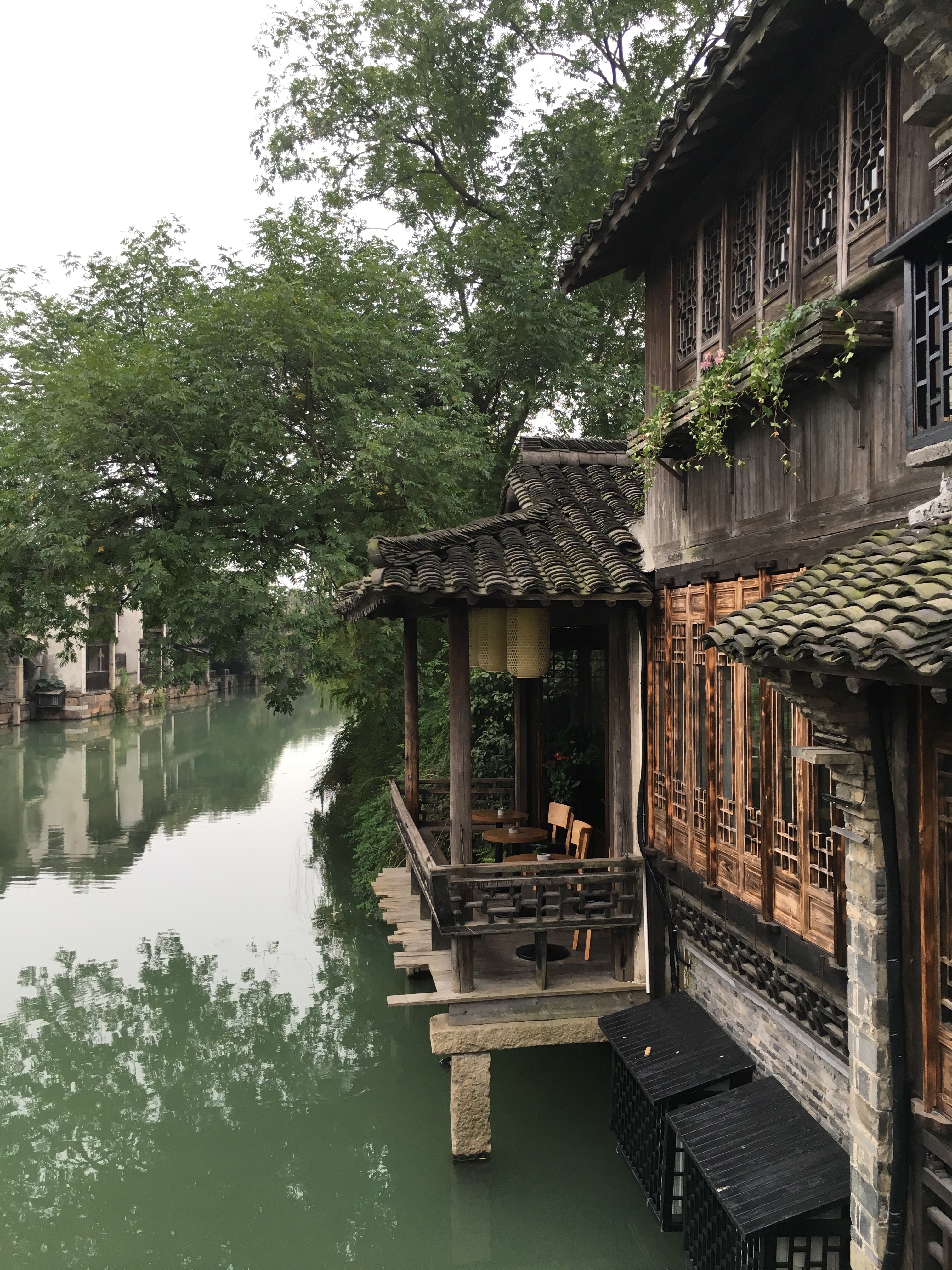 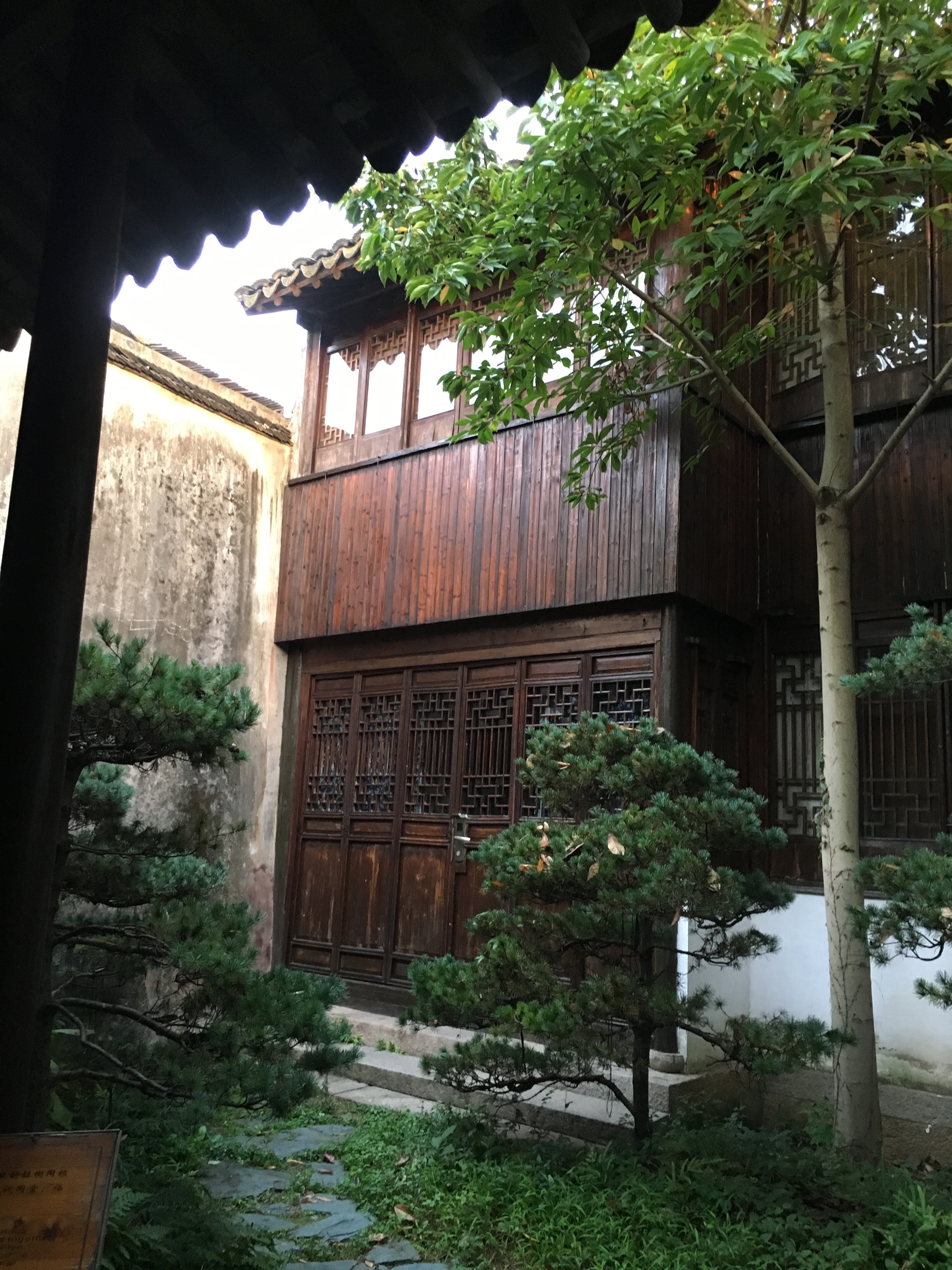 This is the house where we stayed in Suzhou. We chose it because it was very similar to Bao Mansion in the novel. 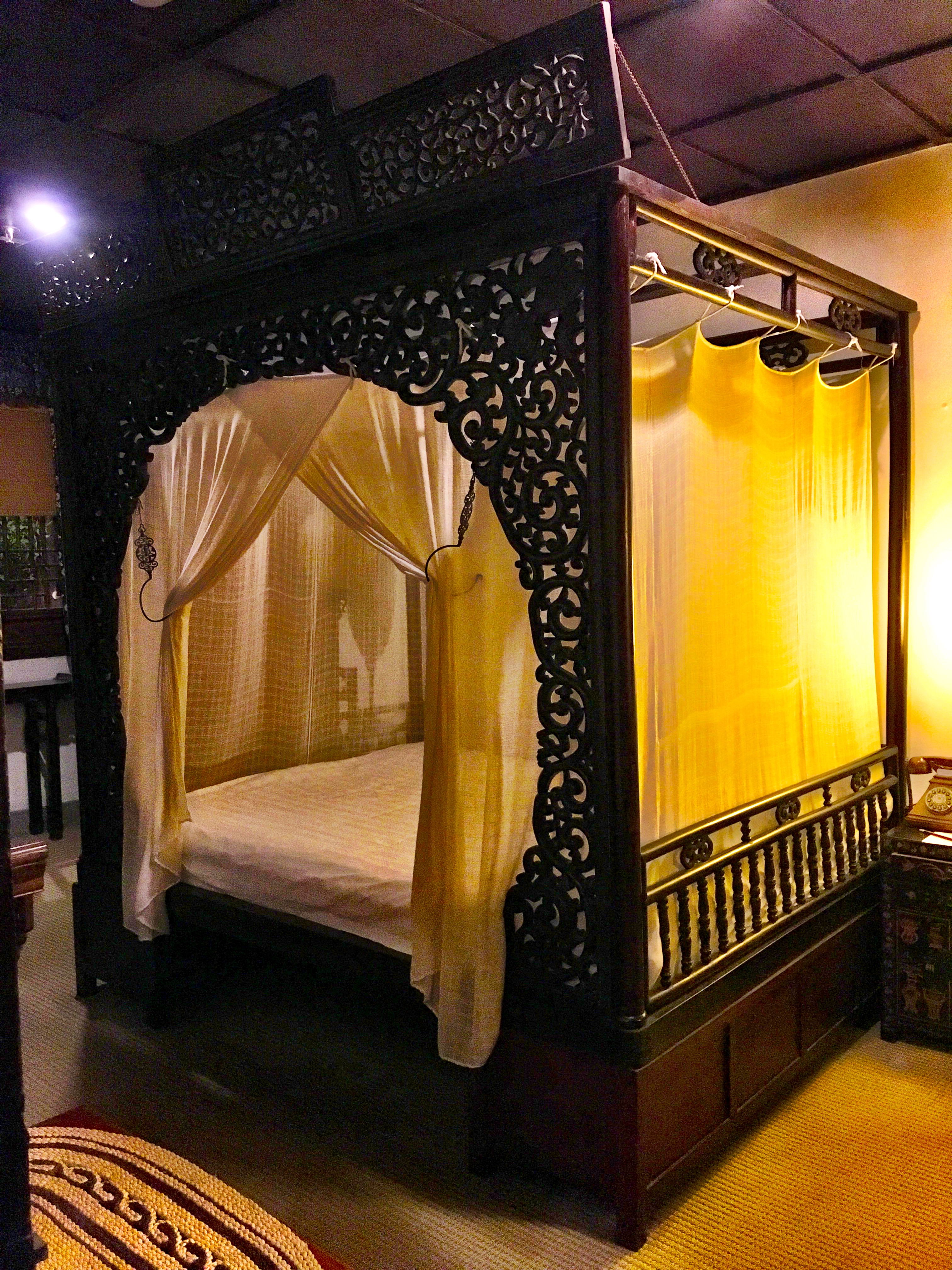 And this was my bed, a traditional Chinese bed. I felt like a princess. 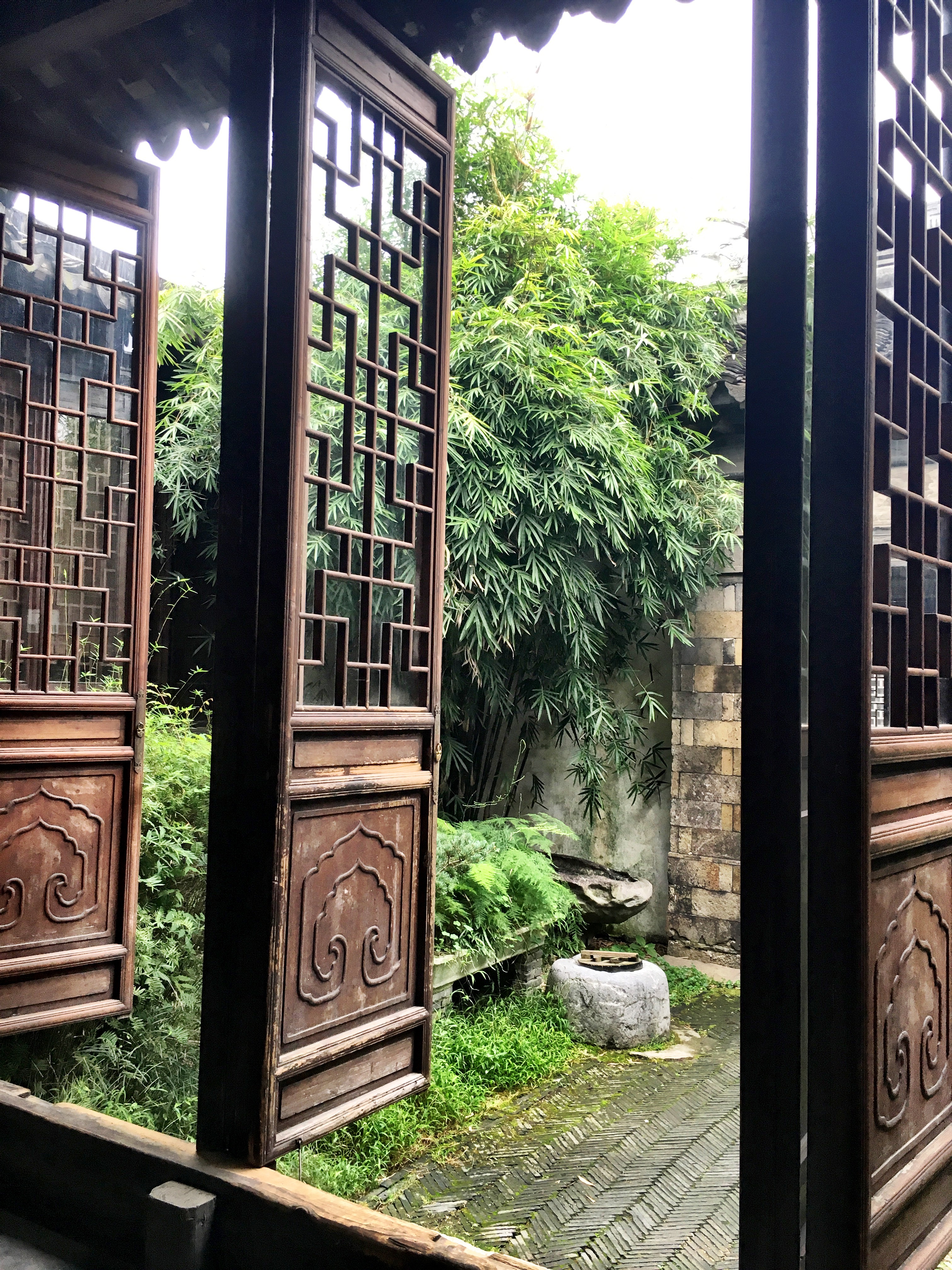 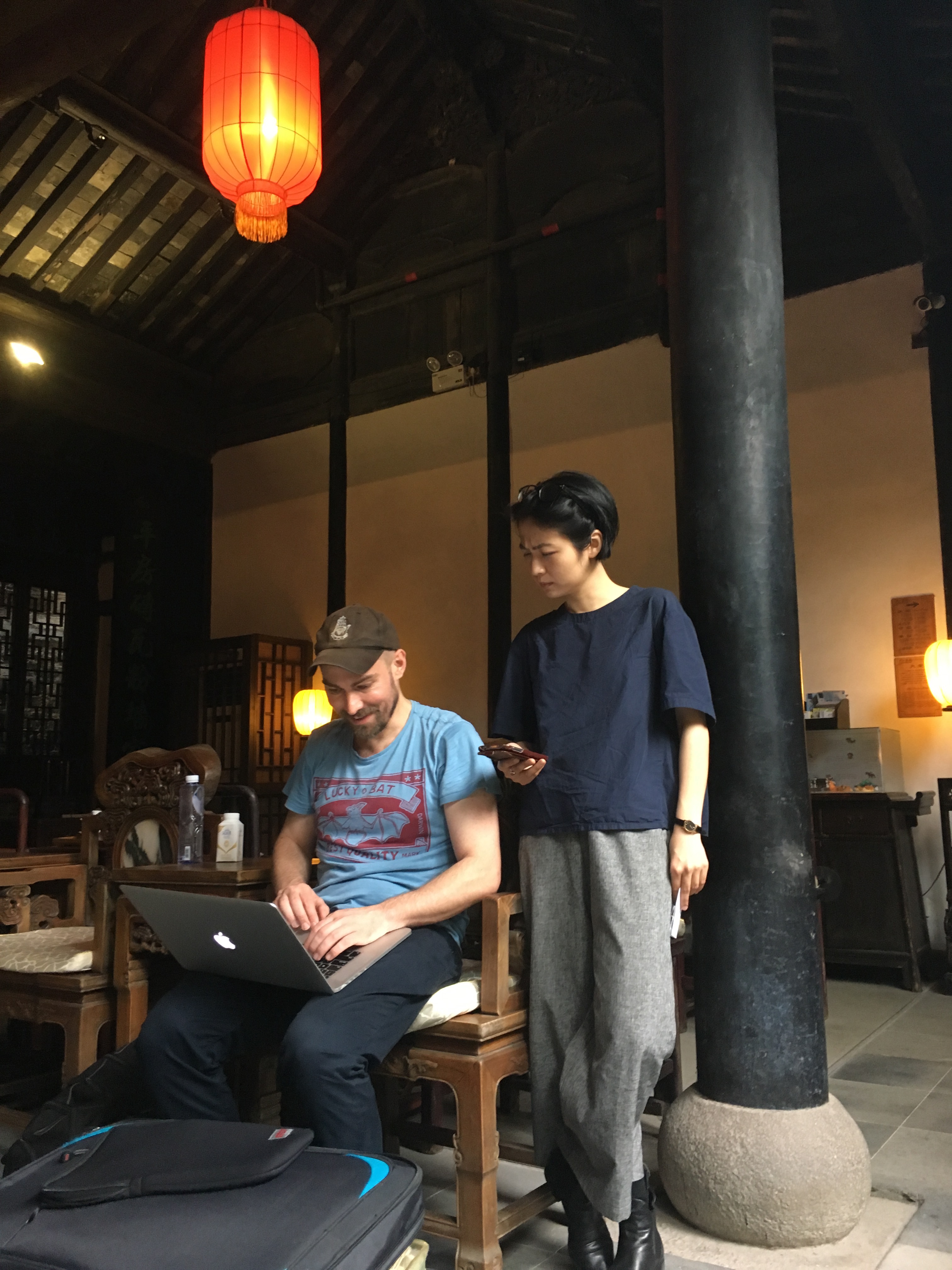 So now, finally the day has come.

The World Premiere of the play will be performed tonight for the Melbourne International Arts Festival at the Arts Centre. I could not be prouder. 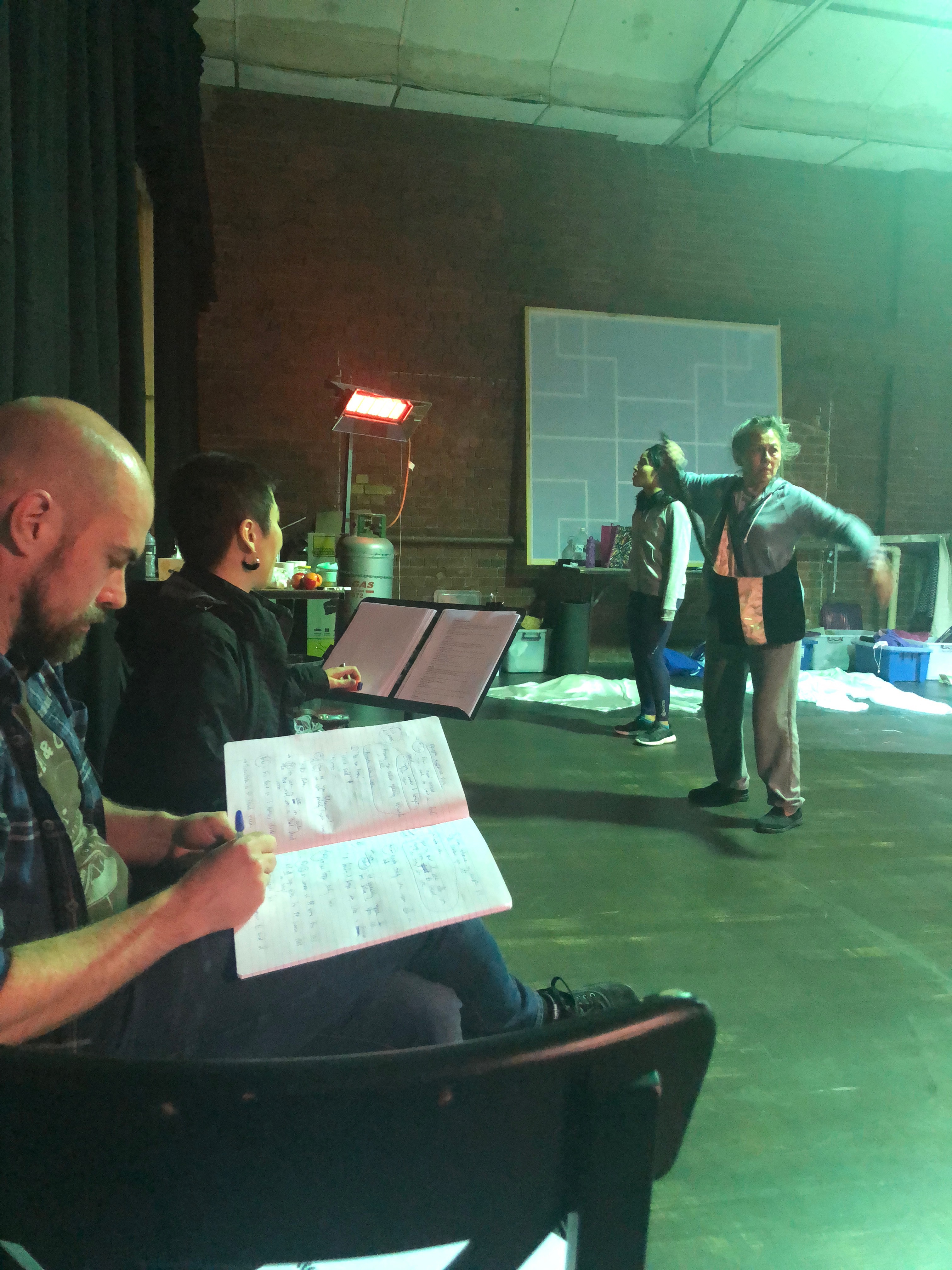 This is a technical rehearsal. Matt and Felix are making notes. Amanda Ma who plays Por Por is in action.

Voice and body warm up. 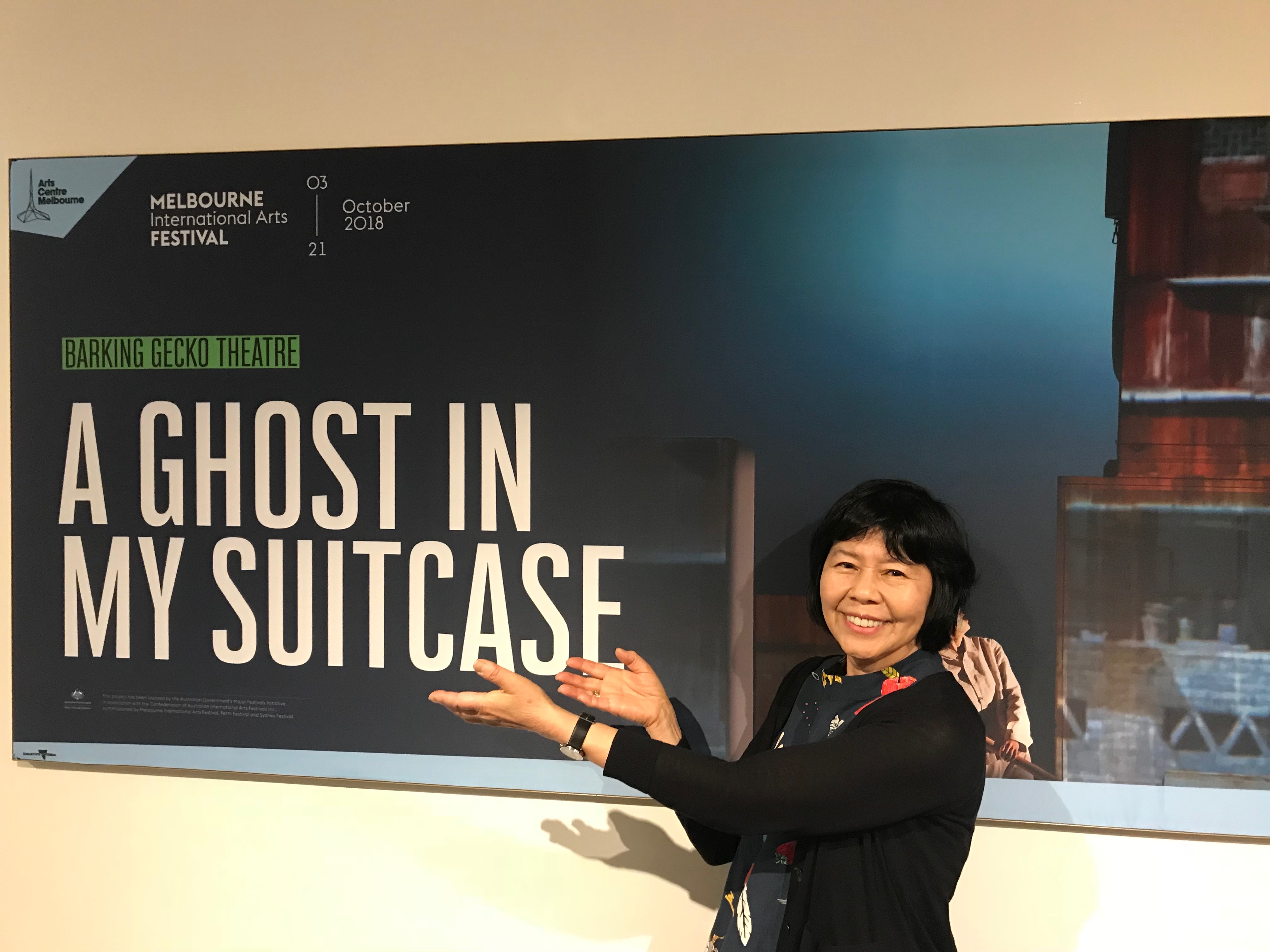 Inside the Arts Centre. How lovely to discover a huge poster. 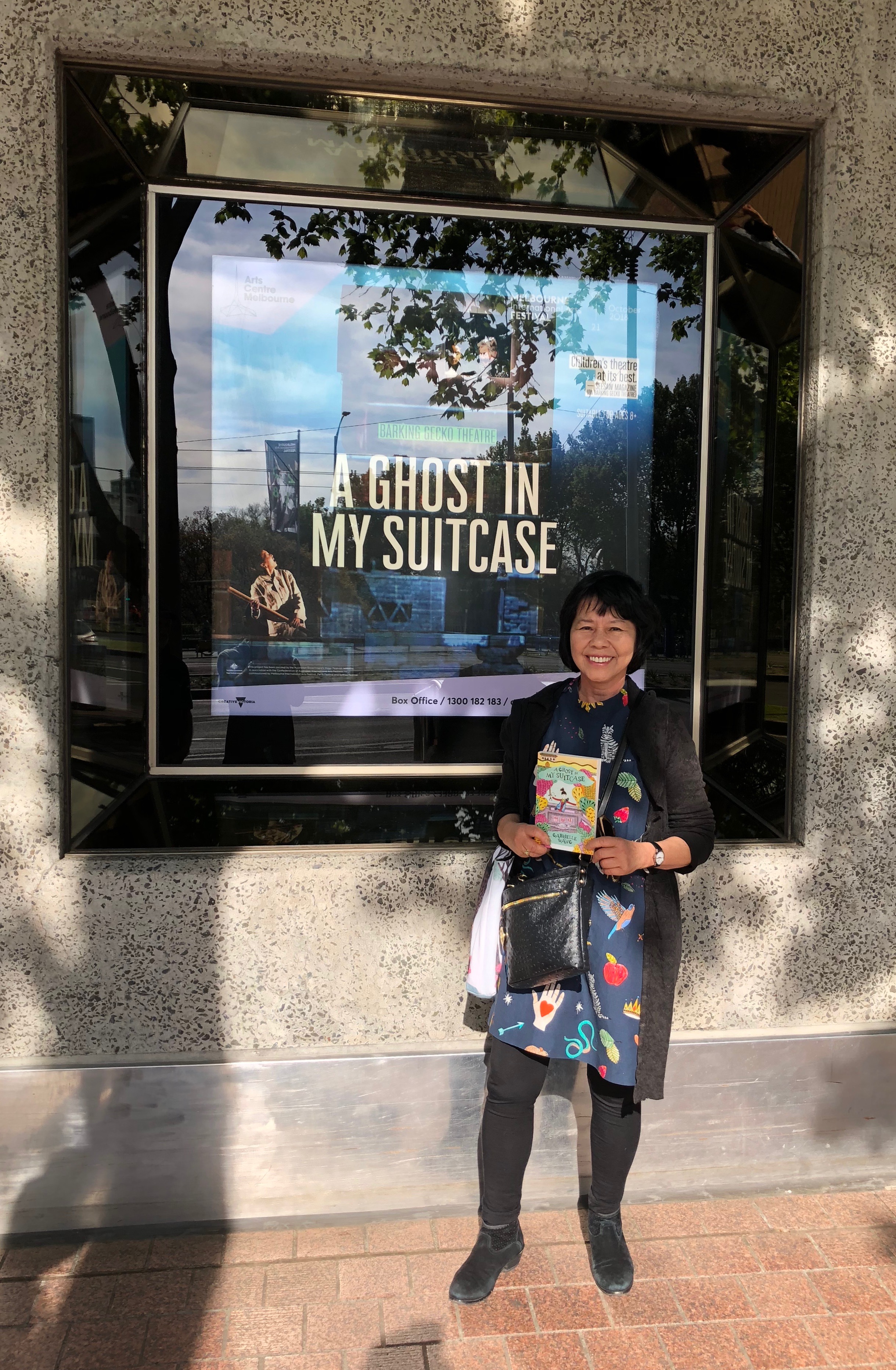 Taken on the outside of the Arts Centre. Three tourists were walking by and noticed the poster. One of them read out aloud, ‘A Ghost in My Suitcase’. And I said, ‘That’s the play of my book. I wrote that. Would you mind taking a photo?’ 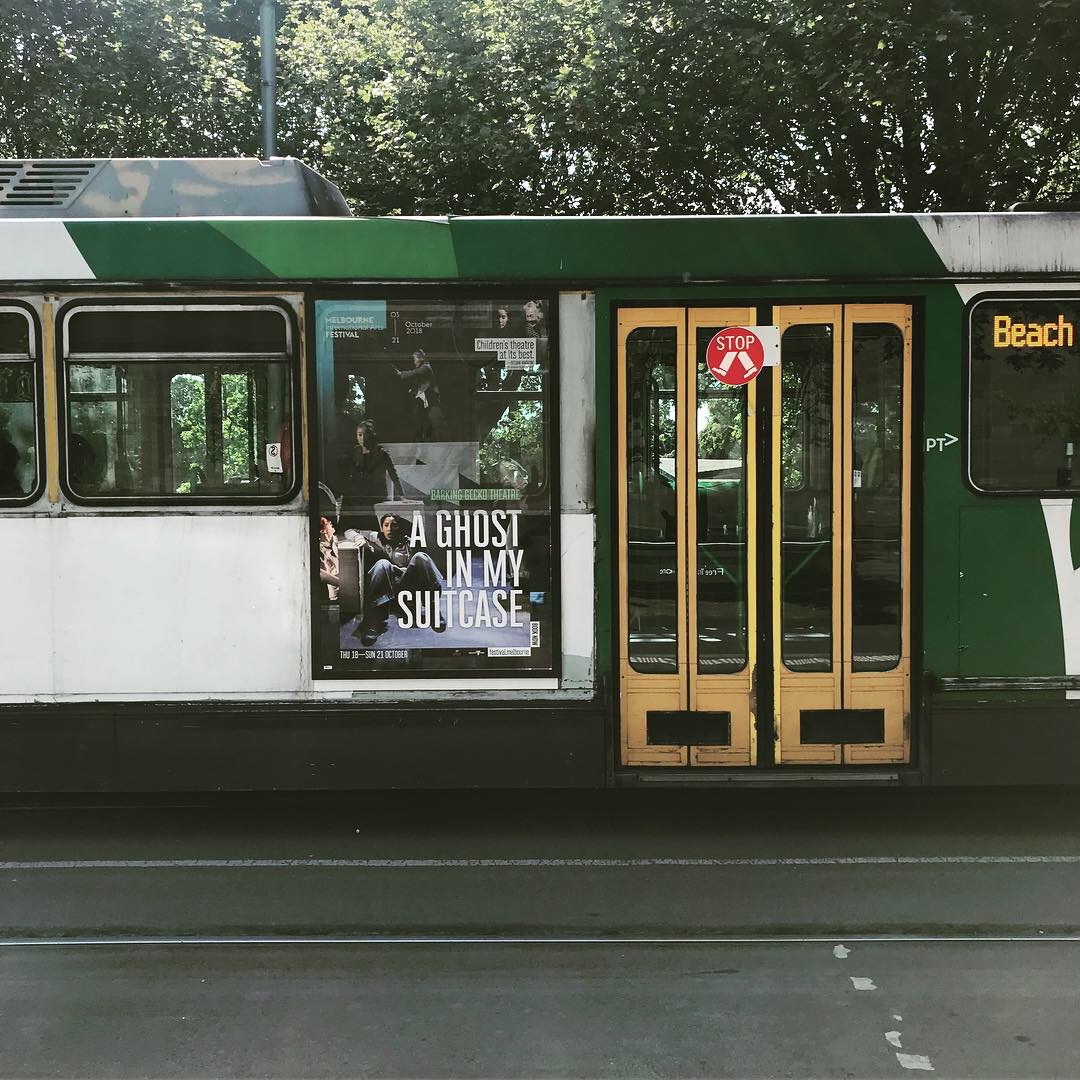 The advertisement is even travelling all over the city on the Melbourne trams. How iconic. Friends keep sending me photos which I love them for. 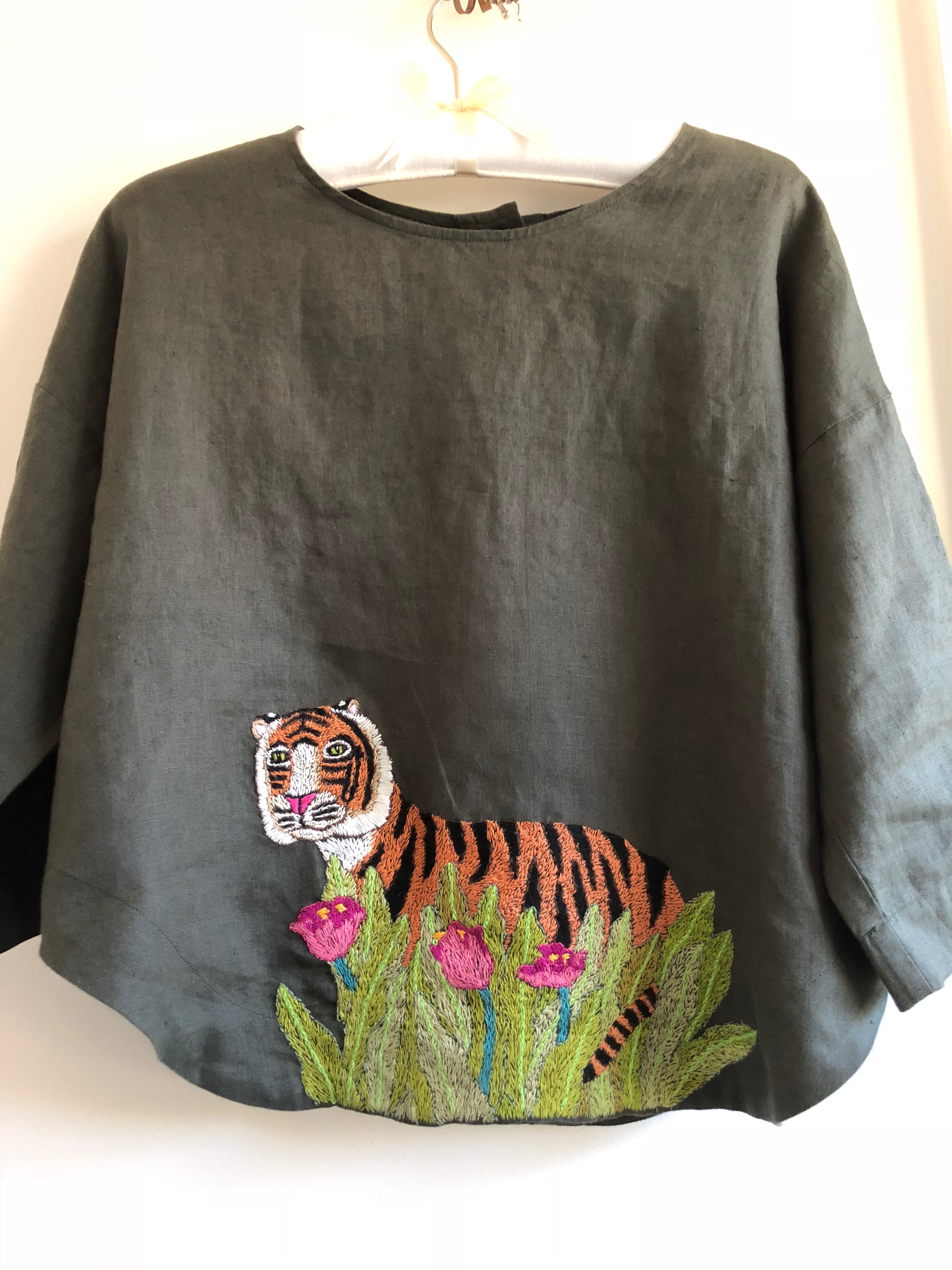 This is what I embroidered especially for the performance of A Ghost in My Suitcase. It took 2 months working on it every night. It’s from one of my illustrations. Tigers are my favourite animals. 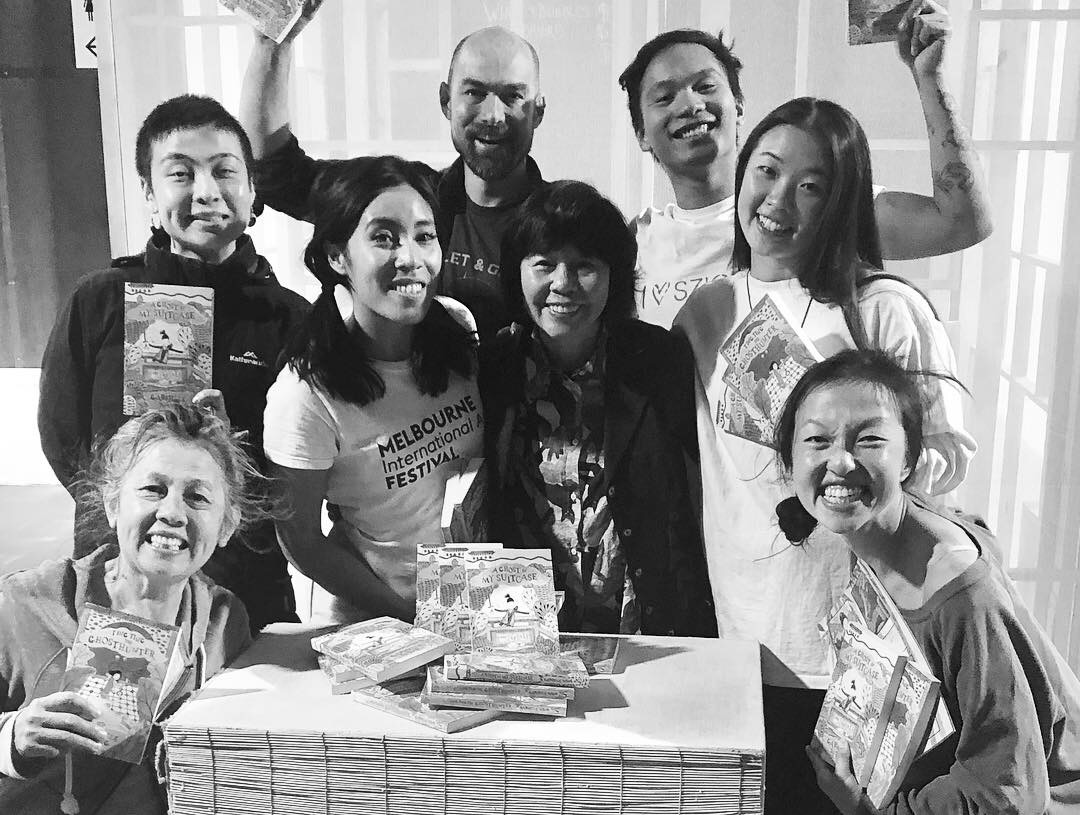