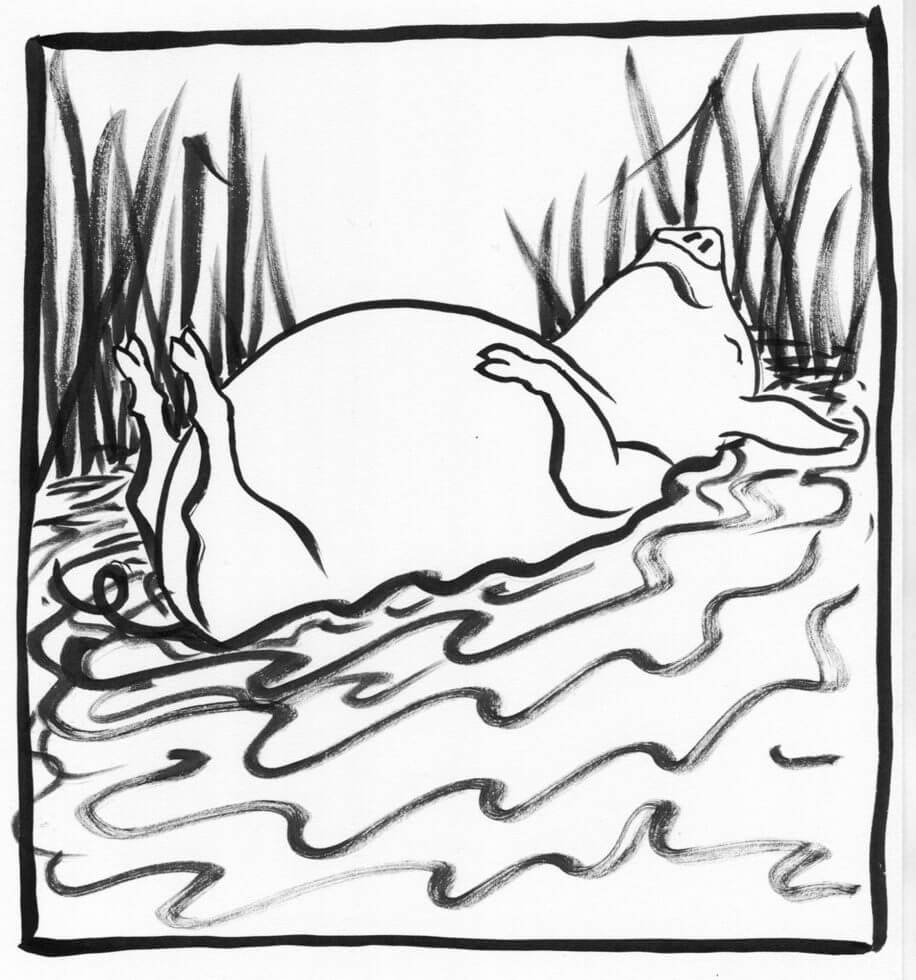 I interviewed Sally about how she went about illustrating THE RACE FOR THE CHINESE ZODIAC.

What was the very first thing you did after you received the manuscript for The Race for the Chinese Zodiac?

I often start by looking at lots of other books with interesting illustration styles and think about what kind of style would best suit the text.

What were the various stages you went through when illustrating the book?

I tried a few styles to begin with that didnt work, including collage. Eventually I asked Black Dog if I could bring their designer, Regine Abos, on board to collaborate with me from the start so I could combine my hand-done illustration techniques with her contemporary computerised ones. We decided that I would do the loose Chinese brushwork and she would drop in the texture and colour behind it with the computer. Im very happy with the result.

How did you create the Chinese chops?

Initially I thought I would pay someone to carve them all in stone but it was going to cost a mint and take way too long. Then it occurred to me that I could achieve the same effect with linocuts. So that is what I did. I copied each character backwards onto the lino and carved around them to make each print. Of course afterwards I realised I didnt really have to do them backwards at all, we could have reversed the image on the computer, but anyway I enjoyed the challenge.

Was The Race for the Chinese Zodiac different to other picture books you have illustrated?

Yes, very different in the sense that I worked with a designer right from the start. Usually in Australia the designer just comes in at the last minute to add the text and place the images. Recently I met David Mackintosh, the designer for all Lauren Childs books, at a picture book conference in Singapore, and he gave a talk about the way designers work in the UK. I realised after listening to him speak that a designer can do so much more than just lay out text. He and Lauren work together right from the beginning with her roughs and lay the book out together. I think this is a wonderful idea as both the designer and the illustrator have very different ideas and skills they can bring to the finished book. Regine and I were given a lot of freedom by Black Dog and were both able to bring something of ourselves to the illustrations and I think the end result shows.

What medium did you use?

Chinese ink and Arches paper. Plus linocuts for the chops.

How long did it take to paint one picture?

The actual brushwork is quite quick  what took the most time was sourcing the image, doing the sketches then the finished drawing. After all this I would lay the finished drawing on the light box, place a piece of watercolour paper over the top and try to do the black outline in as few brushstrokes as possible to keep that minimal Chinese calligraphy feel.

How many roughs did you make before you decided on the actual painting to use?

Usually around four or five pencil sketches. Some of the ink paintings I redid but most of them I was happy with first off. Particularly if I was in a painting mood that day (ie; calm and centred).

You told me once that you work fairly quickly. How long did The Race for the Chinese Zodiac take to complete?

The thing that usually takes me the longest is the planning, thinking about the book and working out what kind of illustration style I am going to use. This can take many months, but it is a very important part of my creative process  its the germinating period you could say. The actual working with paper part is comparatively quick because I already have a strong idea of what I want to do. So I probably completed the finished artwork for the Zodiac book in a matter of weeks.

Where did you study Chinese painting and for how long?

I studied for three years in China. One year at the Shanghai College of Art, then two years at the China Art Academy in Hangzhou (Gabi studied there too!)

Yes I did for two years. It would have been fun, hey Sally, to have been at the Academy together?  Ok next question. What is your favourite medium to work in?

All types. I do love brush and ink for its strength and spontaneity but I also love collage, watercolour, charcoal, gouache  each gives a different mood to the artwork and it depends on the look and feel I am going for.

Which is your favourite page in the book?

I think the piggy lying on her back. It makes everyone chuckle. She looks so blissfully happy. But I am rather proud of my dragons, too  having never drawn a dragon before!

And here are some more brush and ink illustrations. My favourite is the one of the Rat and Cat riding on the Ox. 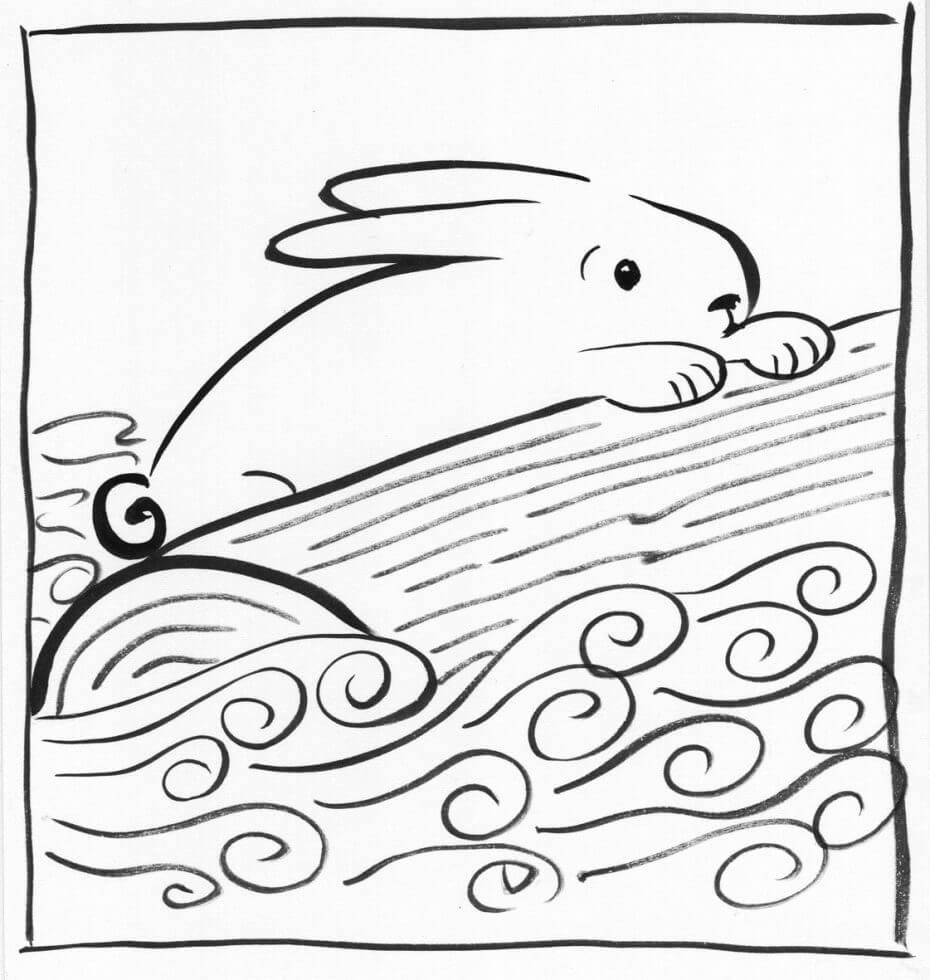 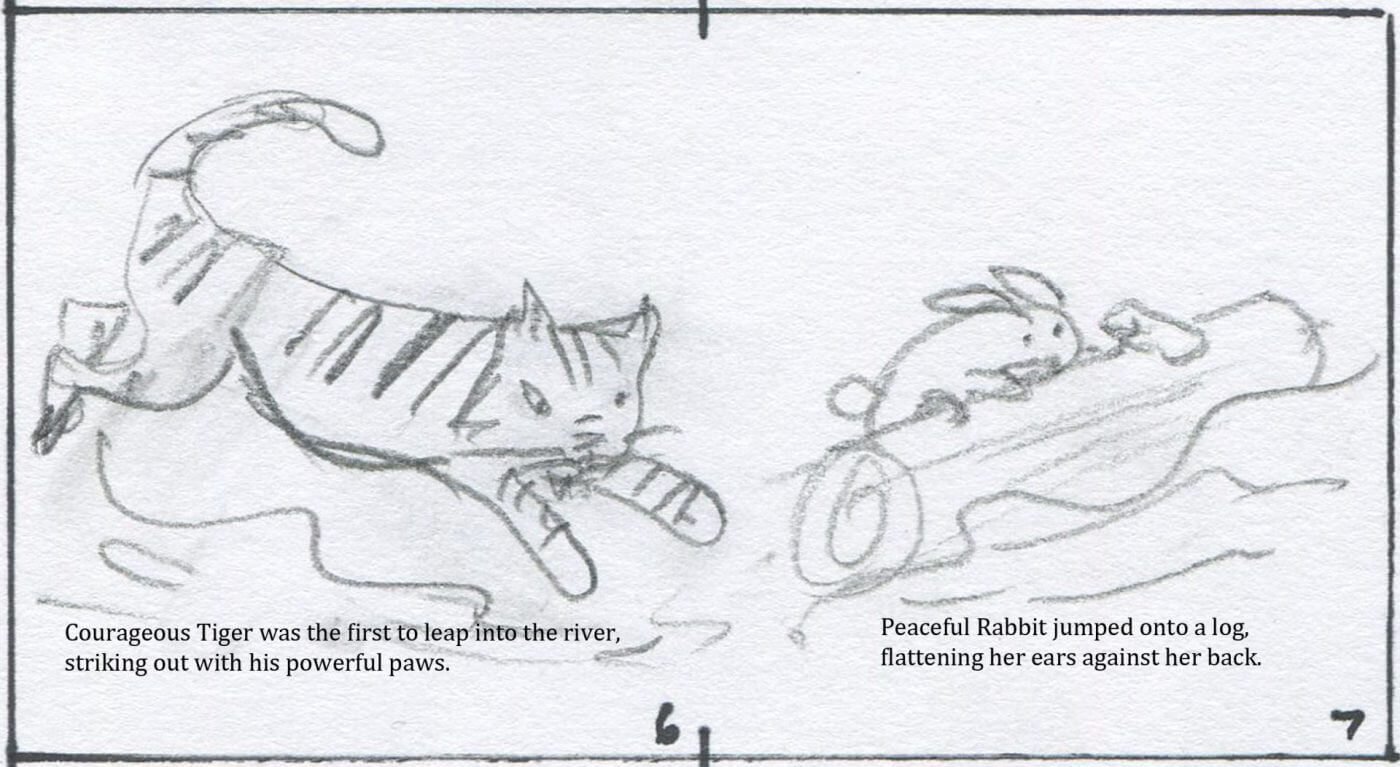 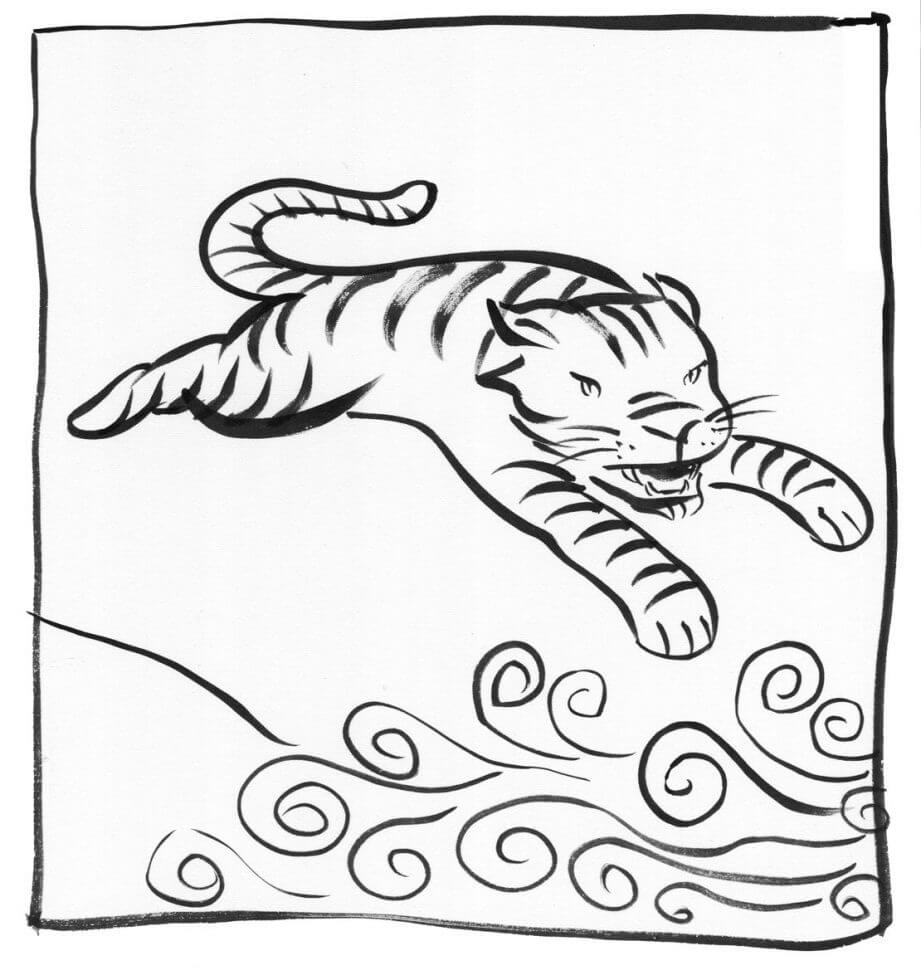 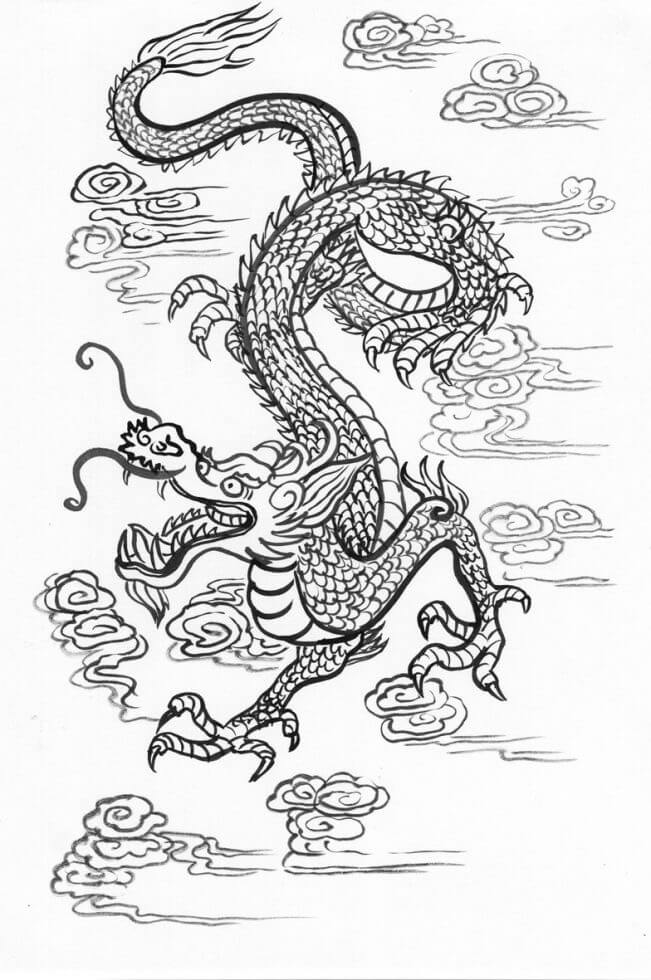 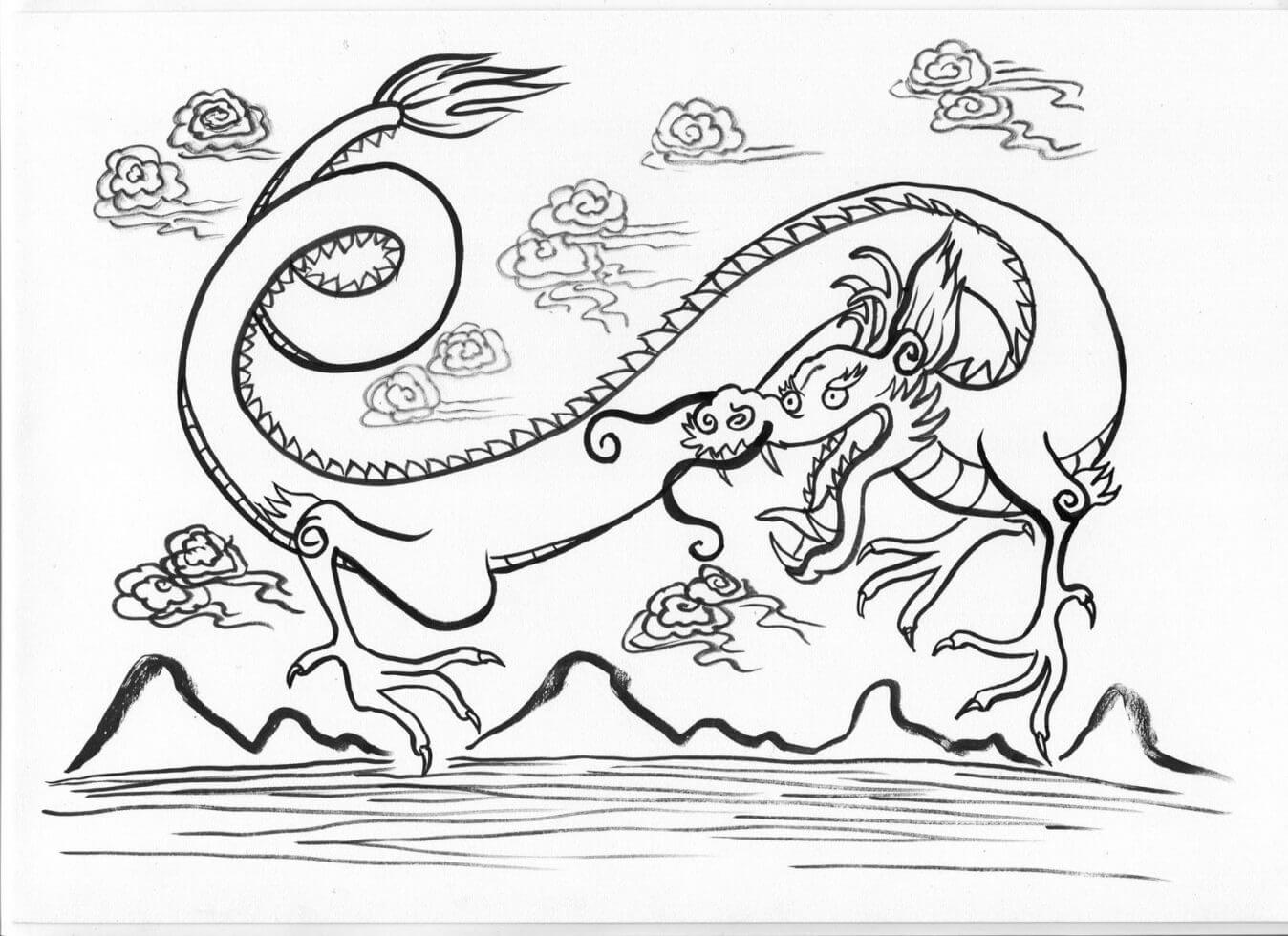 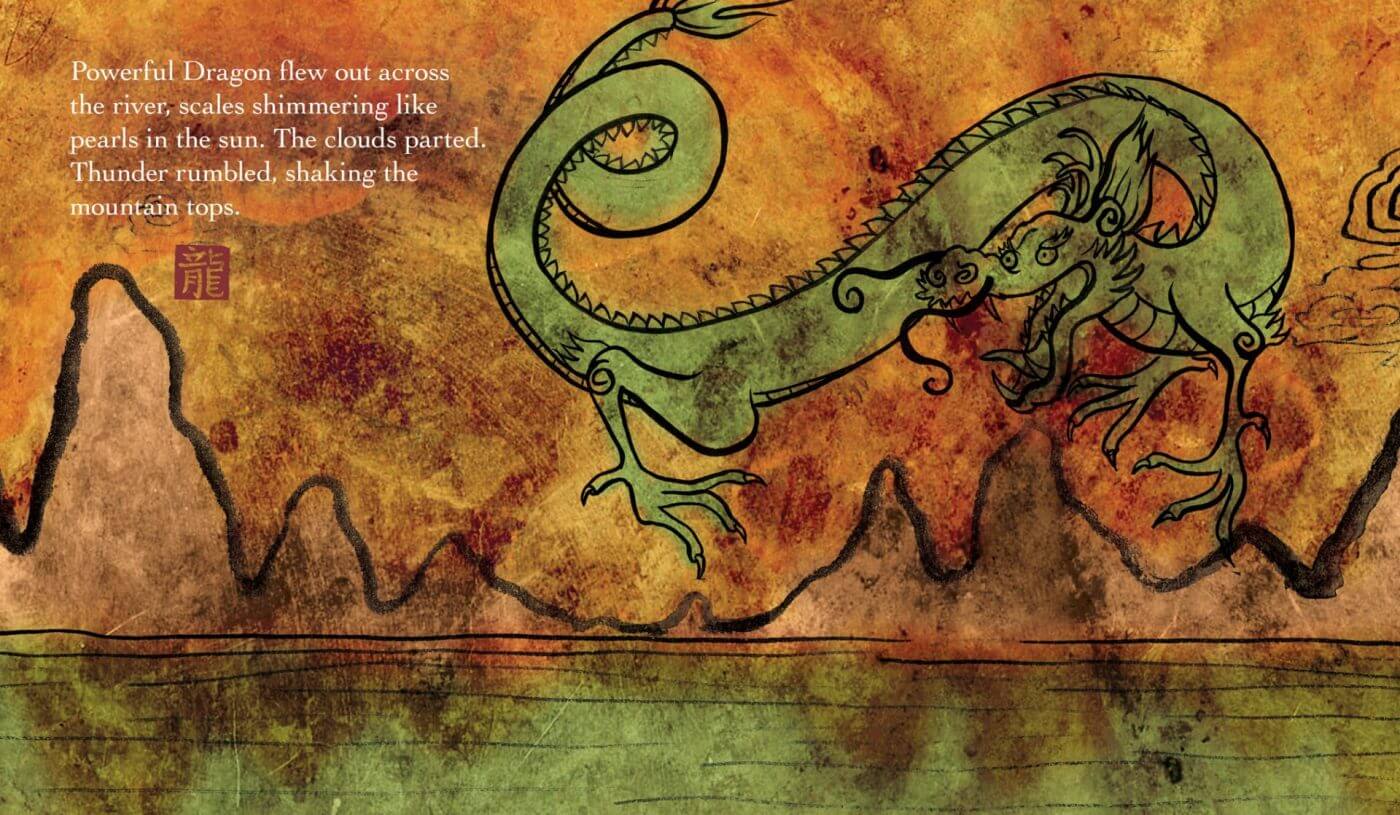