The other day we drove to Warburton, to the upper reaches of the Yarra. The Yarra River begins on the flanks of Mt Baw Baw and flows 245 kilometers to Melbourne emptying out in Port Phillip Bay.The aboriginals of the Wurundjeri tribe had lived on the lands around Port Phillip Bay for at least 30,000 years. For them, the Yarra River was a life-source, etched into the landscape by the ancestral creator spirit Bunjil – the wedge tailed eagle. They called the river Birrarrung – “Place of Mists and Shadows”.

Before European settlement, the river was clear. But due to intensive land clearing and development after the 1800’s, the water now contains tiny clay particles which makes it appear muddy.

Our destination was a secluded spot on the river bank. I had planned to work on my novel with the occasional lifting of my head to contemplate the tranquil river. My husband was going to do some fly fishing. It was also the perfect opportunity to introduce our new puppy, Hero to the bush.

After we parked the car we walked through a meadow that followed the river. I don’t think there is a more invigorating sound than the deep hollowness of rushing water as it slips over boulders on its way to the sea. It was going to be a perfect day.

As soon as Steve cast his line in the water, he had a strike. It was a good sized brown trout too, big enough for the table. But as is his custom, he released the fish back into the water. Again he threw out his line and again caught a brown. He was pleased. I watched him wade around the bend of the river and began setting up my things – my comfy canvas chair, thermos flask of hot tea, a slice of fresh baked rhubarb cake, grapes, editing notes.

By this time Hero was down at the water’s edge doing what dogs do best, digging in the mud. But then I realised he’d have to be on a lead as the river bank suddenly fell away into deep water. I had horrible images of him being swept downstream.

So much for my tranquil time of writing, reading and contemplation.

After that it was downhill all the way. In half an hour I saved him from ingesting a plastic bag full of fishing tackle that he had dug up, picked leeches off his body – one which was already full of somebody’s blood, removed a number of bush ticks ready to do the vampire thing on him, and pulled out an army of grass seeds that were already advancing on his ear canals. Added to this were horse flies the size of cicadas, ready to bite any exposed piece of flesh.

I decided that the only safe place for him was up off the ground in my nice comfy canvas chair. 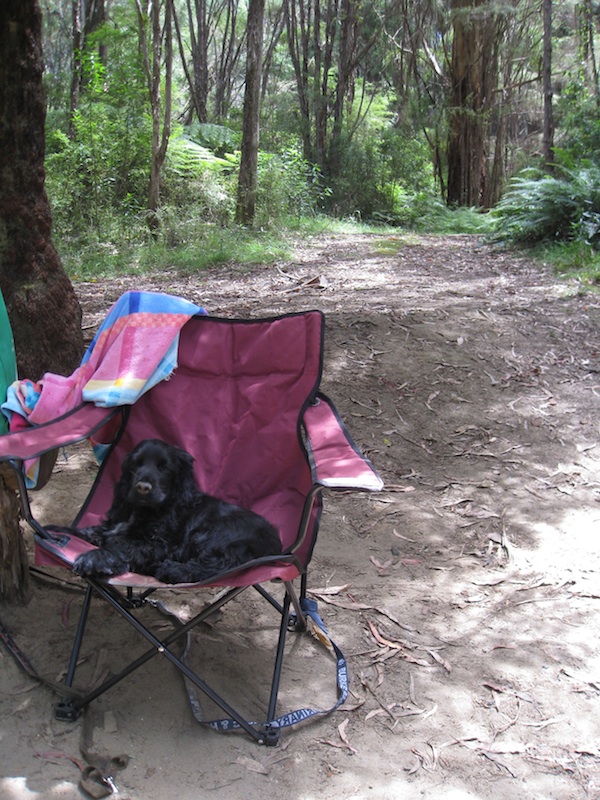 So while Hero contemplated the quiet river, I pulled out grass seeds, ticks and leeches and shooed the horse flies away. 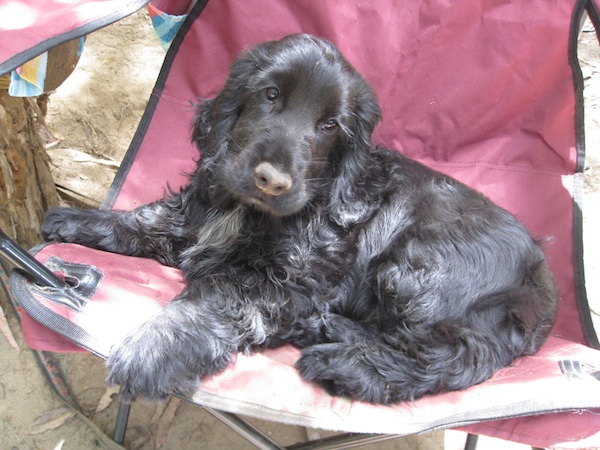 But the highlight of the day was a walk through the forest of Californian Redwoods. These trees were planted in the 1930’s by the Board of Works for experimental reasons. There are more than 1400 of them with the tallest being 55 metres high. A gold plaque states that the Redwoods are listed by the National Trust. 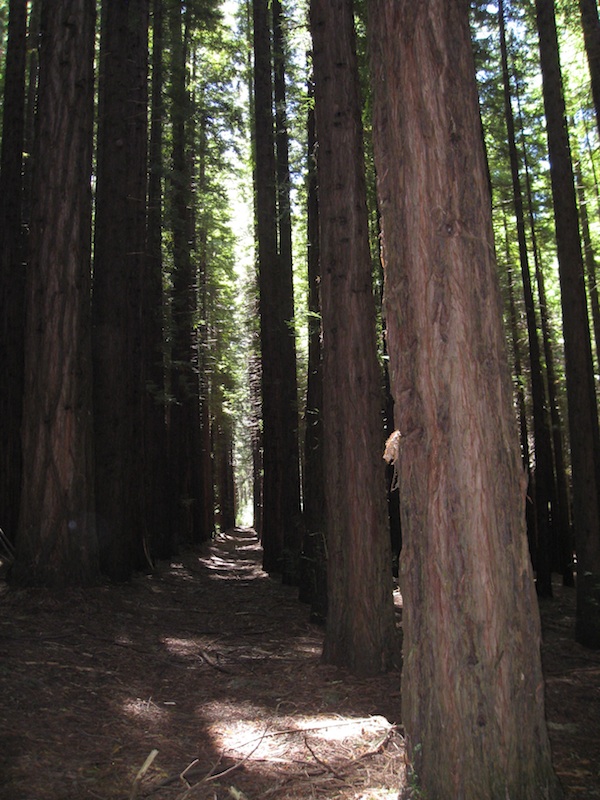 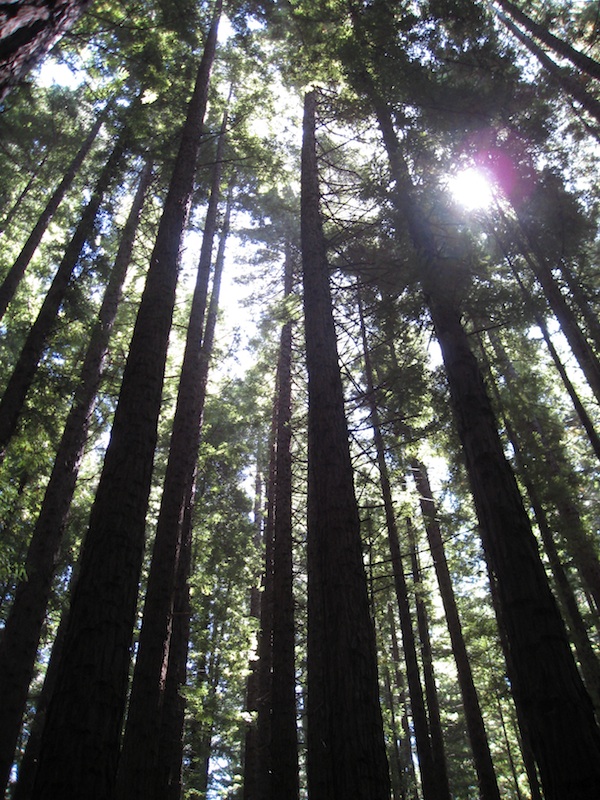 I found a number of humpies in various stages of completion. I thought of my Poppy books in the Our Australian Girl series. The aborigines used to build temporary shelters like these. 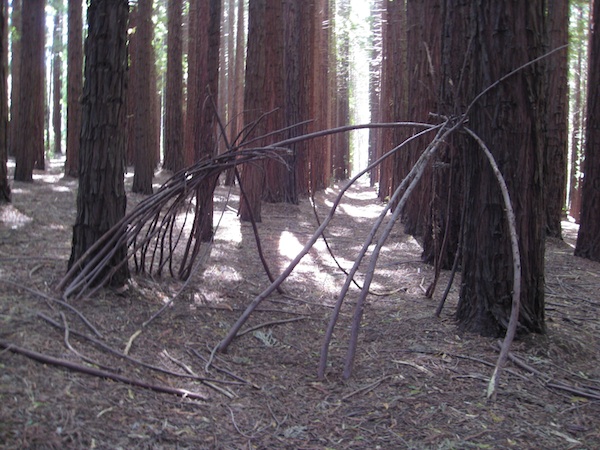 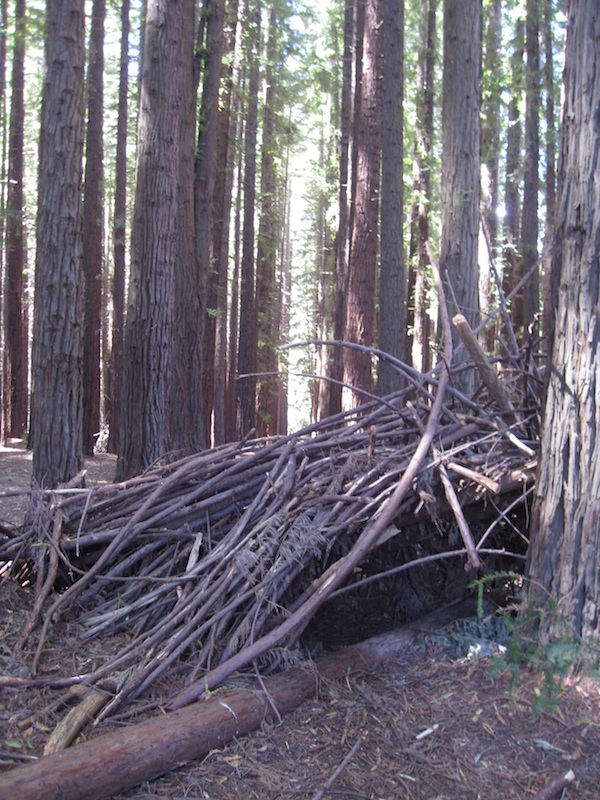 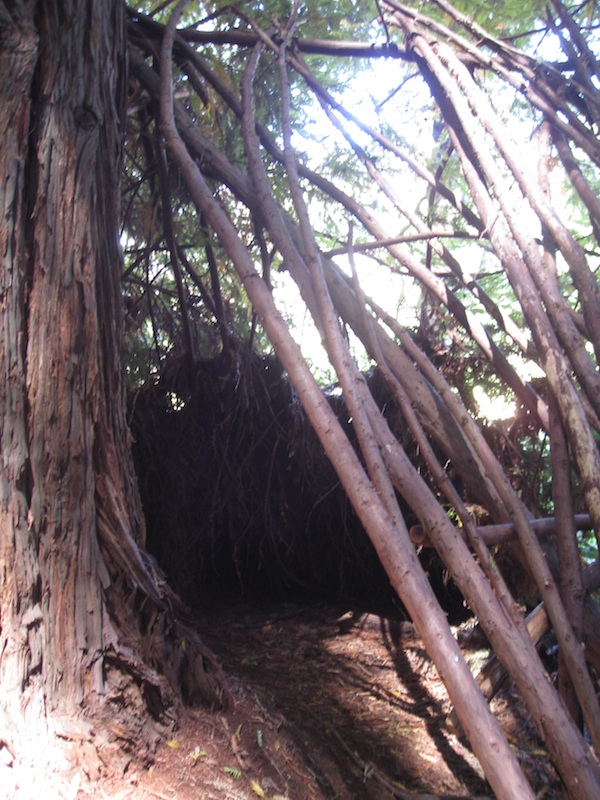 I wondered who had built them. They were like wooden sculptures, quite beautiful and they added a mystery to this already magical place.

But the excitement of the day didn’t end there. At midnight I had to rush to the animal emergency center. Hero was beside himself with itching, racing around the house like a mad dog with rabies. $180 later, dosed with phenergan (the dog that is, not me) we finally made it home at 1.30 am. Whether it was because of the grass seeds or because I washed him for the first time with Oatmeal shampoo when we got back from Warburton, or perhaps there was residual clothes washing powder in the trough, I don’t know. But I gave him a wash with plain warm water when we got home and he finally settled.

It was a day full of adventure and surprise. But these are the things that feed us writers.

I finish this post with a piece by Ernest Hemingway. It arose from a bet he made with colleagues that he could write a six word novel.