The noise in New York fills every space, inside and outside your head. You could pick one of the myriad sounds and follow it to its source and there would be a story. There is so much to inspire
in this city.

The subway rumbles, screams and squeals as the train pulls into the station. On other tracks express trains rush by. I’m reminded of an old Kurosawa film called Dodes’kaden, Kurosawa’s first colour feature. A mentally handicapped boy drives an imaginary trolly making the sound do-des-ka-den, do-des-ka-den, do-des-ka-den. That’s how it is in the subway. But instead of slow, clearly enunciated syllables, dodeskaden is said all in a rush, the sounds piled on top of each other.

Out on the street there’s clanging and dinging and sirens from ambulances. And the mid tone get-out-of-my-way honking of fire engines. And then there’s the singing. It’s everywhere. On platforms, outside shops and museums, on train carriages. A couple of buskers got on my train yesterday – they were Mexican, one played a piano accordion, the other a guitar. They sang the iconic Mexican love song in two part harmony, and the lovers across the way smiled at each other then kissed. Buskers are good in New York.

Another day on the subway, a group of kids on summer camp got on. They were black kids between the ages of 4 and 12 and they played a variation of the paper scissors rock game but with hands clapping to a rhyme. The rhyme went like this:
Peee cha poo.
Peee cha up
Peee cha down
Peee cha all around
Peee cha poo
Whoever lost had their cheek pinched and held by the other. Then the game would continue until one of the players won twice and could pinch both cheeks of his/her opponent. It was such a cute game. All dimples and giggles and hair in tiny braids.

Everyone in NYC is an immigrant. Whip out your map and often times someone will stop to help. I’m going to adopt this generosity of spirit when I get back to Melbourne. Australia is a country of immigrants too but sometimes we forget.

I love the way people sit on their stoops and watch the world. It’s perfect weather for it, too hot and steamy to stay inside. And I love how anything goes. You can be as outrageous as you want and nobody cares or stares. Riding on the subway in the non tourist areas is the best place to see some amazing personalities.

On a more mundane but important note, I met up with Carol Snyder who is the SCBWI New York Metro organizer. They run a buddy system for visiting members which is a grand idea so we had lunch together in Greenwich Village. I wasn’t sure how I would recognise her but she cleverly carried a SCBWI bag.

If you are a children’s author, The Society of Children’s Book Writers and Illustrators is a great organisation to be a member of, especially if you are yet to be published. It’s great for networking with like minded people. Whenever I travel I contact the local members of the cities I’m visiting. Through SCBWI I have spoken at an International School in Bilbao, Spain, and at the American Library of Paris and dined with the members there. And this trip I attended a social gathering in London. And in New York joined a networking dinner where there were four editors, two from Penguin and two from Scholastic, and two agents. The deal with the US publisher Kane Millar for The Garden of Empress Cassia which is coming out in September, arose out of a discussion I had with the publisher at the Sydney conference last year. This conference is bi-annual and is organized by the incredibles, Susanne Gervay and Chris Cheng. There are also yearly conferences in New York in winter and Los Angeles in summer.

I’m writing this in the Arora, an airport hotel in Heathrow London. Tomorrow I fly back to Melbourne. I’m not looking forward to it. My beloved dog, Saffy died while I was away and I will be returning to a house without her. She was 13 and a wonderful dog, so intelligent and easy and undemanding… a great listener too. I used to read my chapters out aloud to her. She helped me become an author. I’m sure it’s not only evolution that has made the dog man’s best friend. There’s something deeper, a spiritual connection.

It’s as silent as can be in my room. After New York it’s like being set down in another dimension.

My daughter moved to NYC several months ago to follow her dream in the fashion world. She has done well and has a job. It was so very special spending these past 11 days with her. There’s nothing quite like a mother/daughter relationship. I love traveling with her. She’s always so sensible. I only learnt the one subway line, the number 6, which can get you to a lot of places but she got us around from north to south, east to west. We seemed to eat our way around the city, cafe and restaurant hopping from one village to the other.

I am already planning my next trip. 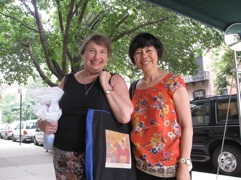 With SCBWI member Carol Snyder after our lunch in Greenwich Village 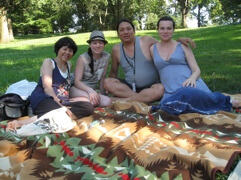 Lunch with my daughter and her friends in Central Park. New York couldn’t have worked without this amazing park. 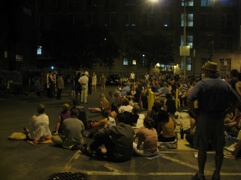 This Shakespeare play was performed in a carpark near my daughter’s apartment. We would often walk by and watch them practice when the carpark was empty. Here is the real performance. 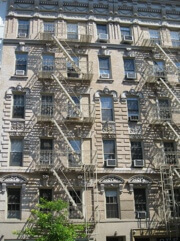 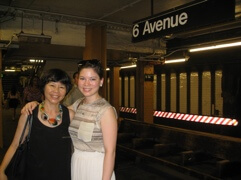 Our last afternoon together before I head back to London. 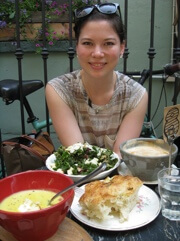 And the last meal of many wonderful meals. This time at the Bakeri in Brooklyn.