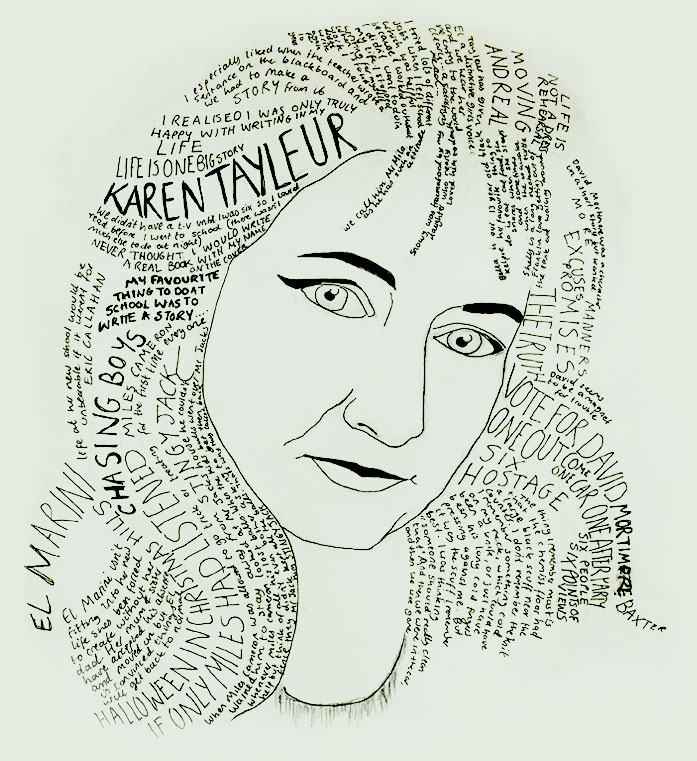 How did your first book get published?

I am loathe to say that my first book took only 3 hours to write. That said, it was three hours and twenty years of practise, so when you look at it that way, it’s not so bad. It was a classic case of noticing opportunity when it knocks and opening the door. I was working in magazines at the time and I was in production week with crazy hours and a young family. I was also studying part time. A friend of mine contacted me on a Friday of production week to say that a certain publisher was looking for stories. I had to say no. There was no way I could fit it in. Then, at one point on the following Sunday night I thought, ‘This is crazy – this is what I’ve been wanting to do. I have to try this.’ So I set aside my work and wrote a story about a boy who loved watching TV. It was called Square Eyes and it is still earning me PLR/ELR 11 years later.

Not a fortune, but something, so that’s kind of nice.

What is your daily writing routine?

I used to work four days a week and write on the fifth…and on the weekend and in the car waiting on kids at sports training, travelling, whenever.

For a couple of books I would get up at six in the morning and write before work. Now I squash my writing into holiday time, after work and weekends. The kids are older so there’s less Mum’s taxi and more time for me. I once wrote a book on the kitchen island bench at my Mum and Dad’s house during Christmas break amidst the hub-bub of three families and that seemed to work okay.

I used to have a two and a half hour round trip to and from work four days a week so I used a lot of that time to plan my stories.

Now I find I’m thinking about them when I’m shopping, washing, cooking – at the strangest times.

I love airports – sitting there writing character sketches about people around you. Invariably I have shifted my note book out of my bag so I have to use the back of an envelope, or a ticket, or whatever. You hear and see the darndest things in public. I like to work out backstories for these people – their relationships to one another. It’s never boring…

I guess what I’m saying is that I’m always writing. Whether it’s seeking stories in strangers, or noting the slant of the sun as it bends through the leaves of a tree or scribbling notes that sometimes find their way into something bigger – it’s a way of seeing the world which I can’t turn off and have no inclination to.

I used to write in a room we called ‘the ironing room’ which was part of a lean to that was added onto our house before we bought it. The ironing room was as wide as a desk and sat between the laundry and the toilet. This meant I sometimes had to leave it to give people their privacy. It was the coldest room in the house but the kids knew if the sliding door was shut I was off limits.

Now I have a real study which used to be my daughter’s bedroom. I’ve decked it out with Ikea Billy bookshelves, but of course there are too many books and they sit at least two-deep on the shelves. My desk was salvaged from an upgrade at my husband’s office. I love how big it is. It sits under the window looking out at the rhododendron and camellia trees with a peek through to the road so I can watch the comings and goings of neighbours and family. 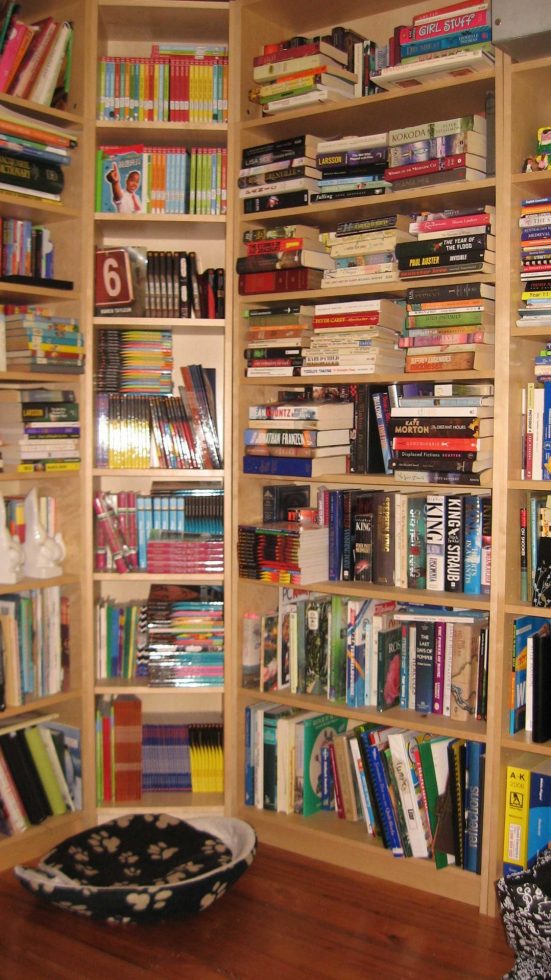 Now I have a real study which used to be my daughter’s bedroom. I’ve decked it out with Ikea Billy bookshelves, but of course there are too many books and they sit at least two-deep on the shelves. My desk was salvaged from an upgrade at my husband’s office. I love how big it is. It sits under the window looking out at the rhododendron and camellia trees with a peek through to the road so I can watch the comings and goings of neighbours and family. 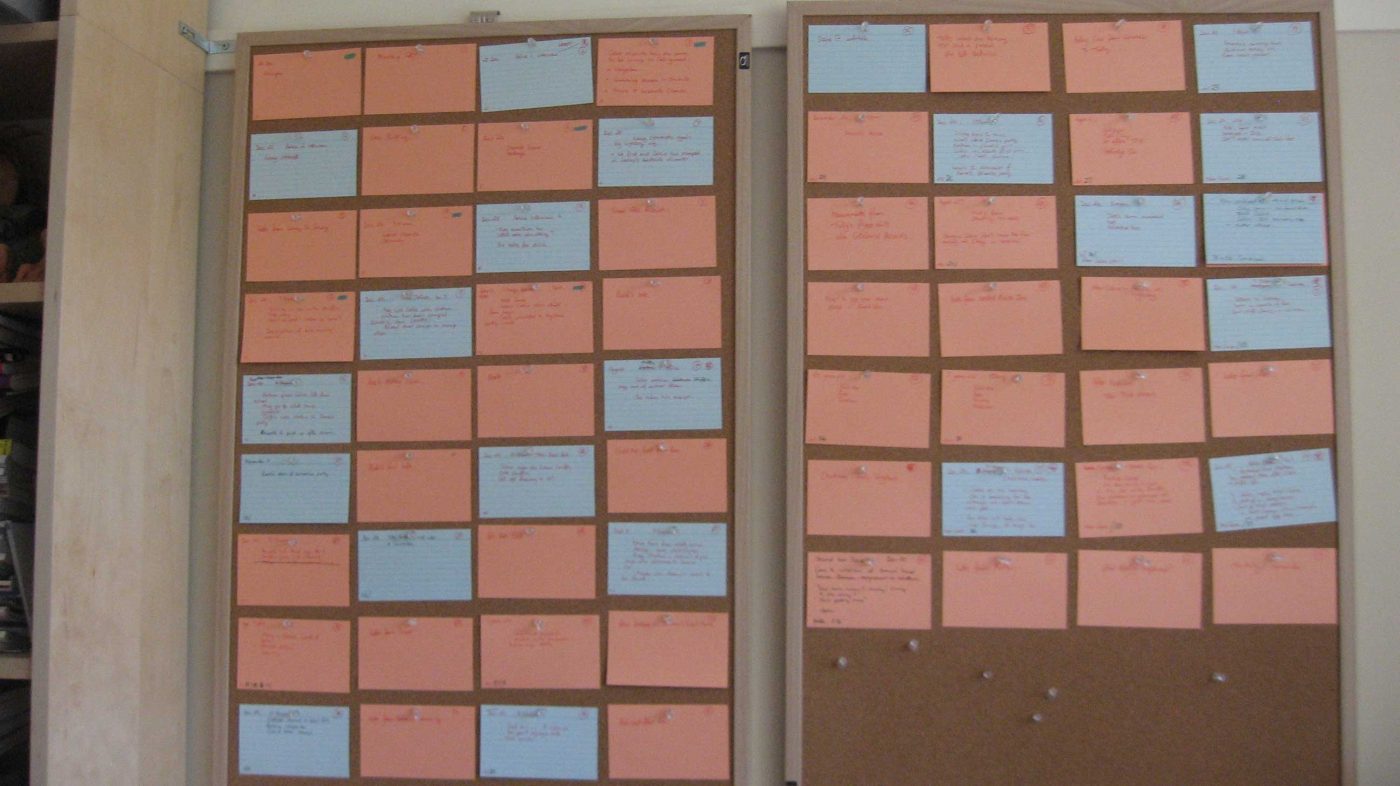 There are a couple of corkboards on the wall that I use to pin up special cards and letters from friends and family. I keep one board free to pin up ideas for my latest book. Images, words, quotes – random descriptions of places or people – maps, sometimes a working title. The nearest Billy bookshelf holds my Macquarie Dictionary and Thesaurus – huge tomes that you could use to straighten your hair if you wanted to – and my mega Oxford Dictionary, plus a Styleguide, other dictionaries and reference books. I have a swivel chair so I can swivel quickly over to this section, and I’m always reminded of the Amish father in Witness who had a similar chair at the dining table.

In the corner of my room is an upright rocker which belonged to my Pa. I spent a lot of time as a child watching him rock in it, roll his cigarettes and tell me outlandish stories. When I have time on a weekend I sometimes make my way to the chair and catch 15 minutes sitting in the chair and having a read. When I’m really busy my family will visit and sit in the chair and catch me up with the latest gossip, or talk about lunch or dinner possibilities or… you know… just shoot the breeze.

What is your latest novel? 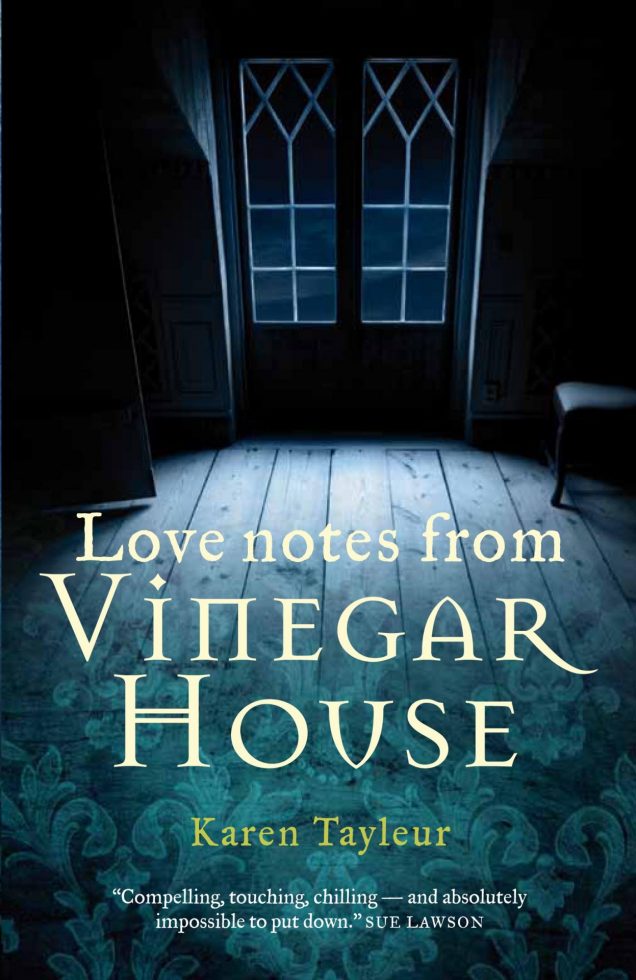 My latest book is Love Notes from Vinegar House. I wanted to write a gothic romance and it took me a long time to get the voice of my protagonist, Freya. I was lucky enough to have a month residency at The Burrow in Adelaide as part of a May Gibb’s Fellowship. I spent a lot of time reading gothic romances, exploring the idea of what a gothic romance was. It was a great time just to be able to read and write and immerse myself in the process.

In my teens my friends and I liked to scare ourselves with the idea of ghosts. We’d tell each other ghost stories and then we’d all have to go to the kitchen, in a pack, and make ourselves a hot drink. If I was staying at my best friend’s house, it didn’t matter what wee hour of the morning it was, her parents would call out from their bedroom, right near the kitchen, to place their oder for a hot drink as well.

Murder in the Dark was also a favourite game when I was a bit younger and it plays a pivotal role in the book. This was the idea which my story grew around. I liked the idea of an innocent child’s game turning into something less innocent by the end of the story.

This is a story where the reader needs to make up their own minds about whether there is a ghost or not at Vinegar House. I like the idea that we don’t know everything – that everything can’t be explained by science.

Grandma Vinegar is a stern figure, but Mrs Skelton is probably harder on everyone. It was disconcerting, then, to hear from my kids that they thought I’d modelled Mrs Skelton on myself.

This is a story of first love and the barriers that need to be pushed aside to finally attain it.

It’s about that bitter-sweetness of unrequited love.

Misunderstandings and misinformation and giddy heights of what may be…

It’s a love triangle, a mystery and a tragedy.

And it’s about Vinegar House – one of the main characters of the story.