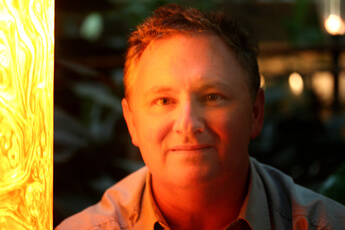 Australian children’s and YA author Michael Wagner talks about his writing process.

As you can probably tell from the picture, my writing space is a tiny room thats very messy most of the time. But thats okay, because its my special place, so no one else really has to put up with it. 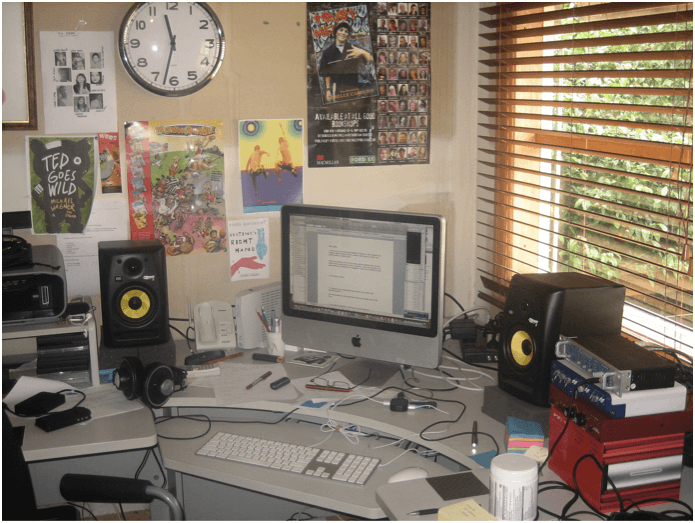 If youve noticed the speakers on either side of my computer, you might have worked out that I like listening to music. I actually love it. And I find it quite useful as part of my writing routine as well.

Occasionally, at the start of the day, Ill listen to songs that help me get into the mood or zone of a story.  I even have playlists of songs that suit particular books  an Undys playlist, a Maxx Rumble playlist, a Ted playlist, etc. I fill each of them with songs that have the right energy or feel for a story, then, in the morning when I sit down to write, I put the playlist on and turn it up. It blares through those big speakers while I get myself organised. And it continues while I start writing. But I find, as soon as Im in the zone, I start turning the music down. And before long its off altogether. For me, music is good for getting started, but once Im on my way it feels too distracting.

If you look closely at the wall behind my computer you might notice two book covers. One is of the book Im writing at the moment, Ted Goes Wild, and the other is of a novel that was published in 2010, Destinys Right Hand.

If youre familiar with the actual cover of Destinys Right Hand, you might have noticed the version on my wall is a little different. In this version, the main character, Eddie, is upside down as if hes falling into Destinys hand. I put that version of the cover on my wall before wed made our final decision on which one to use, and then just left it there because I quite like it. Its a little bit kooky, which I think suits the story. :^)

Also on the wall, just to the left of the clock, is a page of black and white character photos. All of those little faces (which are probably very hard to make out) are characters in Destinys Right Hand. Actually, theyre all just images of young people Ive taken from the Internet, but they each look like what I imagine the characters in Destiny to look like.

Ive put them there for a very important reason (well, its important for me anyway). When Im writing I find it helps enormously if I can clearly imagine the characters and scenes Im describing.  Having pictures of characters to look at, brings them to life in my imagination. So, when Im about to write a scene with, say, three of characters on my wall in it, I start by simply looking at the pictures while trying to imagine them in the scenes location.

At first, this helps a little  helping me to get sketchy images of the characters and the place  but gradually, usually over months, it becomes invaluable.

What happens is, the characters become more and more vivid to the point where they feel just about real to me. In fact, theres a magical moment, that Im always aiming for, when the characters start surprising me with what they have to say during a scene. They become so real they actually start talking for themselves. When this happens, I listen closely and type as quickly as I can. Ive learned from experience that this is where much of my best dialogue comes from.

Its an odd kind of technique, I know, but it might work for you too, so maybe give it a try. The only thing Id suggest is that you persist for a few months because it often takes a while for the characters to really become solid.

So thats my little writing room and a little snapshot of how I work. Its probably quite different from most other writers, including you, but it seems to work for me. I hope you found it interesting.

Your latest publication or WIP

At the moment Im working on a new series about an adventure-loving teddy, called Ted, whos emerged from a very dark past to become someone who loves to save and serve others.

Hes a cool little guy who knows how to survive in the harshest of conditions thanks to the years of training hes received from the leader of all the worlds teddies, Papa Guru.

The first book is currently called Ted Goes Wild and the second one is Ted Gets Lost, but those titles and many other details could still change as I work with Penguin to get them just right.