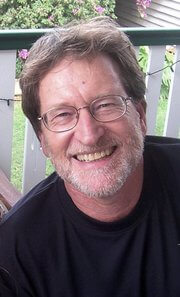 Australian childrens and YA author Michael Gerard Bauer talks about his writing process.

How I got my first book The Running Man published.

In 2000 I was a full time English and Economics teacher, but I resigned from my job at the end of the first semester, desperate to have a go at writing a story that had taken over my mind for the previous year or more. My long time dream was to be a published author, but at the time I resigned, I hadnt written a single word of the story that would become The Running Man.

Over the next three years I took short teaching contracts at various schools plus time off in between to write and by late 2003 had a manuscript finished. I researched publishers through The Australian Writers Marketplace and came up with a list of ten that I hoped might be interested in my story, if it was any good. I figured Id work my way down the list, get ten rejections, and then be able to go back to teaching knowing that at least I gave it a shot. The first reply I got from Omnibus Books/Scholastic Australia was an acceptance. As Ive said before; it was the best phone call of my life. (I never did bother to find out exactly how many of the other publishers on my list would have rejected me!)

The only other person who had read the manuscript for The Running Man (at that point called In Dream Too Deep) before I sent it away, was my wife. I didnt have a mentor, or manuscript assessor, or agent, or previous published work to my credit, or anyone to speak on my behalf. All I had was a cover sheet and what I thought was an interesting picture on the front that my publisher at Omnibus Books, Dyan Blacklock, told me afterwards, she didnt like! I still consider me getting published, as somewhat of a miracle.

I dont think Im a very disciplined writer, but hopefully Im getting better. Before I start writing a story on the computer, I think about it for a long time and even though I wont know all the twists and turns, I have to know how it ends before I type the first word. I do a lot of planning in my head but usually dont write much of that planning down.

A good writing day for me would be to get up early and go for an hours walk (I get my best ideas and organise my thoughts walking) and then write most of the day until around 4 or 5pm. I dont tend to do much writing at night or when Im away from home at Festivals or doing School visits.

I dont write quickly and I rewrite as I go along. If I achieve 2000 words in a day, I think Im really on fire and feel like notifying the Press. My pace may have something to do with me being pathetically slow on the keyboard. Fortunately however my typing speed seems to be just right for my brain  which is a worry.

By the time I finish a first draft, I want it to be fairly close to the finished product. I usually end up with at least three drafts.

The other thing about my writing routine would be that I pretty much need to be alone. I could never write in a coffee shop or with music playing or with someone sitting beside me. Even if they were quiet I would find it distracting and off putting and would possible end up hitting them over the head with my laptop.

Pic 1: This was the study in our previous house where I wrote The Running Man and the next few books. I really loved it. If you look closely you can see on the notice board, directly above the chair, the picture that inspired Dont Call Me Ishmael!  a shot of Gregory Peck as Captain Ahab from the movie version of Moby Dick.

Pic 2: As you can see my writing space in our present home has been substantially downsized! (Although there is also a small study upstairs which I share with my wife and I sometimes work there as well.) The sheet stuck on the wall above the computer in the photo, is a rough outline of the plot of Year 12 for the final Ishmael book. A rare example of me using a written plan. 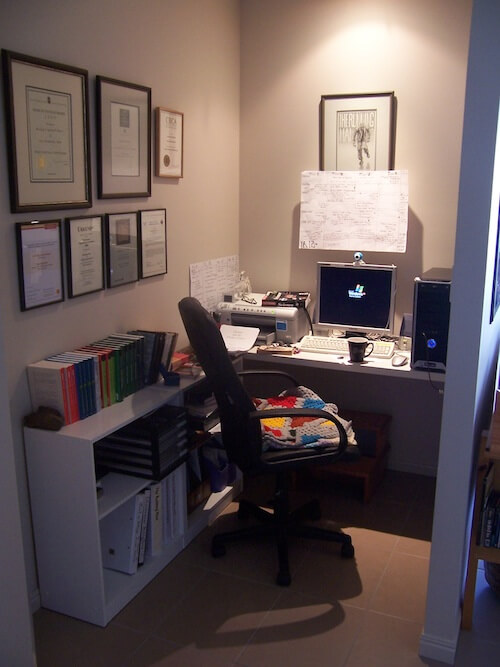 My latest book or WIP.

My latest book is Just a Dog published by Omnibus Books/Scholastic Australia.

My work-in-progress is the third and final book in the Ishmael series. It will cover Years 11 and 12 at St Daniels College and is called Ishmael and the Hoops of Steel. At present it is in the final editing stages and is due to be published in July this year  if I can get the word count down in time!