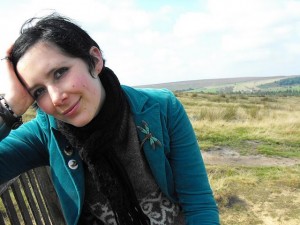 This is a weekly series of guest posts on How Writers Work. In particular, children’s writers. Kate Gordon gives us an insight into her life as an author.

1. How did you get your first book published?

I’ve only really been writing for a couple of years. Properly, that is. Of course, like most writers, I’d written my whole life. Even before I could write, I used to draw pictures and make up oral stories to go along with them. But I never thought I could make a career of my hobby. For one thing, I was too nervous to show my stories to anyone. For another, I didn’t know any writers. I grew up in a small town. I knew farmers, teachers, factory workers. Professional writers just didn’t exist where I lived.

It wasn’t until I met Leigh  the man I’d end up marrying  that I got up the guts to show anyone my writing. When he told me it was good, it was the first time I thought maybe it was. Ask anyone who knows Leigh and they will tell you that he doesn’t praise anything unless it really deserves it.

Still, when he told me I should think about doing it as a career, I said, But I really just write for me. I don’t know if I want to do it for anyone else.

But then, Leigh gave me the advice that made me decide I did want to be a published writer. He said, If you get published, you will be paid to write, and then  best case scenario  you can do it all the time.

Since, I couldn’t think of anything better than writing full-time, I decided to give it a go.

The one thing I knew about getting published was that you needed an agent. I was very lucky that the first agent I sent my work to liked it enough to take me on.

It took me about ages to work up the confidence to email the agent my manuscript. After that, I heard nothing for another month or so. Then, one Sunday morning, when I was still in my pyjamas watching Rage, I got a phone call. The agent apologised for interrupting me on a Sunday morning (!!!) and told me she loved my work and wanted to take me on as a client.

The agent  who was now (and I still love saying this) my agent   set up a meeting between me and the gorgeous folks at Allen and Unwin. I had to fly to the big smoke! They told me they liked the manuscript but weren’t sure if they could place it in their catalogue  (I had no idea what this meant but, obviously, I knew it wasn’t good). They softened the blow by asking me if I’d like to write a novel in their Girlfriend fiction series. I was already a big, big fan of the series and so I was absolutely tickled pink to be asked. I went back to my hotel. And I started writing. And the rest, I guess, is history!

So there it is! There was one rejection. There was a bit of waiting. But, when it comes down to it, I was super lucky that it all happened so quickly. I was also wonderfully lucky to meet some amazing people in the process who have taken such good care of me. My agent is incredible. The beautiful Allen and Unwin people treated me so very well. The people at Random House have been absolutely incredible. And I also met, through my agent, one of my very best writer friends who has become a mentor and an inspiration. I am very lucky indeed!!

2. What is your writing routine.

My writing routine is about as haphazard as my approach to writing itself! My daily goal shifts day by day. One day I might tell myself I need to write a thousand words, or edit twenty pages. The next I’ll be tougher on myself and say it has to be four thousand words or fifty pages of editing. Of course, if I’m on a deadline, that’s different. Then, I work until I pass out or until the cat starts making funny noises and I realise I’ve forgotten to feed him!

As far as where I write, I just read the new book by Mia Freedman. Amongst many things she said which made me think we are the same person (she has a talent for doing this with all her readers, I think), was that she said she likes to write surrounded by noise. She likes to write in cafes and so do I. For some reason I can’t work in silence. I’m writing this now with the telly on in the background. If I work at home, I have to have music on, or the radio, or the TV. I like working in noisy, bustling cafes. I have no idea why it is. I’ve never much liked silence. My theory is, when I’m writing, silence gives my brain space to wander, whereas if there’s lots of noise going on about me I really have to focus on what I’m doing and shut everything else out.

I’m lucky that, now I write full-time, I can pick when and where I write. I can organise my time and work more or less as I need to. I can also multi-task, working on lots of different projects at once, which is how I prefer to work. It keeps me stimulated and has so far managed to stave off anything resembling writer’s block. I’m knocking on wood here, but I’ve never experiences. If I get stuck with one thing, I just move to another.

I’ve probably jinxed myself so if I’m on Twitter a lot next week moaning about having no ideas, feel free to say, I told you so! 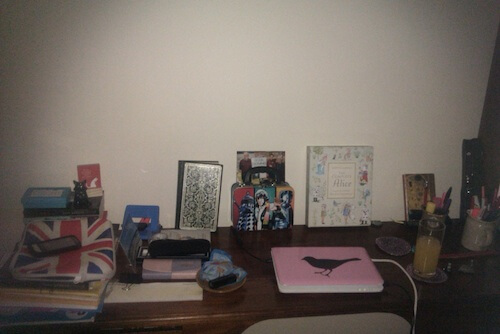 My new house in Launceston is the first one I’ve had that’s big enough for me to have my own writing space. Granted, it’s just a desk in the dining room, whereas my husband gets a whole room for his computer, X Box and guitar stuff but, like I said, I like to work with stuff going on around me, whereas my husband likes his solitude. 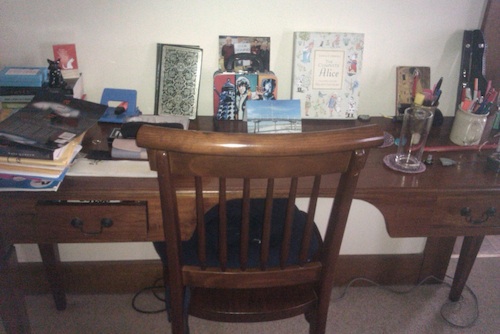 I love my desk. It’s a total mess, but it’s a carefully planned one. There are photos, favourite books, greeting cards I’ve been given, mugs full of pens I never use but which make me feel like it’s a writing desk, not a computer workstation.

When I sit at my desk I feel like I’m a proper writer and this is my proper job. I love that feeling. Also, most of the time, my cat, Mephy Danger, is sitting on that chair. I scared him off with the camera. When I’m not working, it’s his chair. When I am, he sits on my knee. I think he likes to consider himself a bit of a writer, too!

3. What is y0ur latest book or WIP

At the moment, I’m multi-tasking as usual! I’ve just finished the first preliminary edit of the sequel to Thyla  called Vulpi. I’m also drafting book three  Sarco  and I’m brainstorming book four  Diemen. I never really plan books but I like to have a kind of mental map of what might happen. Almost always the map gets screwed up as I start to write and the characters decide they don’t want to do what I tell them to, and as I have new ideas that are much better than my old ones! I always feel a bit more comfortable if I know how a book  or in this case a series  is going to end up. 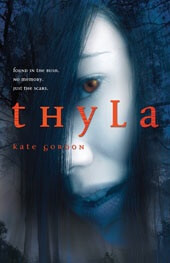 I hadn’t decided how the Thyla series would end until a couple of weeks ago when the Gorge in Launceston was flooded. My husband and I  along with most of Launceston  went up there to see what everyone was saying was a one in fifty year event. It was so astonishing seeing the Gorge bursting with water, churning and thundering through the canyon. It was one of the most awe-inspiring sights I’d ever seen. And, as a bonus, it gave me an idea for the ending of the series! I’m loving working on a series for the first time, following the journeys of the characters. I’m also really glad I decided to make each book from the point of view of a different character as it lets me get to know the four narrators more intimately and it gives each book a really different vibe and voice. I only hope the readers like each of the protagonists equally! Fingers crossed!