Inspired by Simmone Howells Anatomy of a Novel, this is a weekly series of guest posts on How Writers Work.

Children’s and YA author Julia Lawrinson talks about her writing process.

I had scribbled for years  various half-finished bits and pieces, short stories, vignettes  and felt that I was a writer long before I was ever published.  But I didnt believe I could write a novel, had no idea what I would write a novel about.  Then a few things happened which changed me, and delivered the sense of narrative Id been lacking: I started reading YA (before that I read a lot of plot-light literary fiction); I had a child; and I developed sudden and severe rheumatoid arthritis, triggered by childbirth  this last made me fear that I soon wouldnt be able to write at all, and so I thought, if Im going to write, Id better get on with it.  So, in the least auspicious of circumstances, I began.

I have been blessed with many writing mentors/inspirations, directly and indirectly: Marion May Campbell, Gail Jones, Dorothy Porter, my wonderful poet friends, Brigid Lowry, Glyn Parry. And the most blessed part about being in Western Australia, besides the beach and the sunsets, is the glorious, supportive kids writing community we have here.

I work full time, and so my writing fits around this: scribbling notes on the train, writing during insomniac hours, on weekends, on holidays.  Otherwise it wouldnt get done.

Does working full time interfere with my writing?  Yes. It changes what I write and the way I write it.  Does it stop me?  No.  It slows me down, but doesnt stop me. 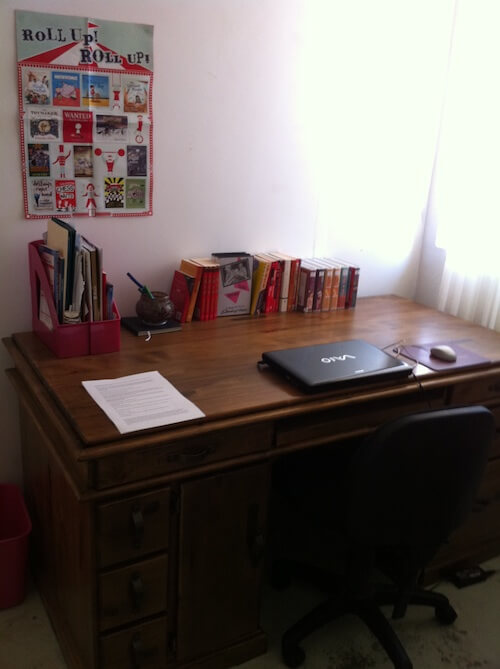 My writing space is under construction/creation: it is the product of an extension we have had, but at present we lack the funds to finish it off properly. Also, I lack the necessary solitude to make as much use of it as I would like (see 2!). Still, up until now I havent even had a room, so this is progress.

Apologies for the white-out on the corner of the photo: it was 37 degrees when I took this.Your

What is your latest WIP

My WIP is due out in early 2012, and is about four scholarship girls who make a pact to lose their virginity before the end of year 12.  It sounds a bit American Pie, but in fact it was inspired by Melvin Burgess Doing It  its the girls version.  Some of it is funny, some of it is serious. Its in the final edit stage as we speak.