This is a weekly series of guest posts on How Writers Work. This week I’m talking about how I write and my creative space. 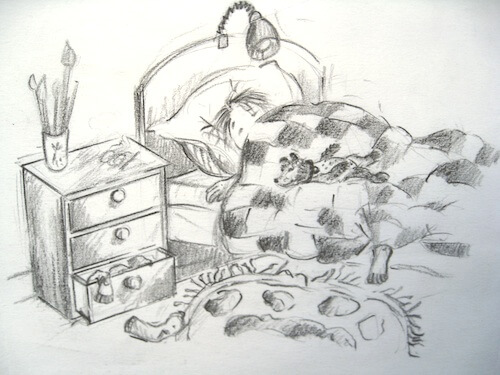 How I got my first book published

As I come from an artist’s background, I initially only wanted to write and illustrate picture books. I took several classes at CAE over the years, but it wasn’t until I went to Holmesglen Tafe in 2000 and took a single subject, Writing for Children, that I discovered I could tell a story with words. This was a complete shock to me.

My essays at school were way below average. And I failed Year 12 English and Modern European History because of it. But analytical essay writing is vastly different from a story of fiction where you can let your imagination fly.

Hazel Edwards was my teacher that year at Holmesglen. It was through her faith in my writing that I kept sending my manuscript out. Every time I saw that self addressed stamped envelope come back, my confidence would drop another notch.

I still have the index card with the name and date of the 9 publishers I sent The Garden of Empress Cassia off to, and the date it was returned. It took from 11th July 2000 to 12th March 2001 before a publisher accepted it. This was the wonderful Julie Watts at Penguin. I remember meeting her in a coffee shop in Richmond and wanting to scream with joy. Instead, I pretended to be cool, as if this momentous thing happened to me everyday. I also remember thinking that if I was struck down by a car and died, I would die gladly and happily, which was a stupid thought because the novel hadn’t even been published. And little did I know then, how much hard work still needed to be done on it.

The Garden of Empress Cassia has won awards and been published overseas and has had eleven reprints to date. So you can never tell. If you are an unpublished author reading this post, all I can say is, keep sending your work out and have faith in yourself. If it is rejected, it doesn’t necessarily mean that your work is no good. So much depends on luck and timing.

I make sure not to arrange a social event before 2.30 pm. I’m usually at my desk by 7.30. I first check my emails. And also check them regularly throughout the day. I don’t like them piling up. Those emails that only need a quick reply, I deal with straight away. Others that require more thinking time, I put into a special folder for later.

Working from home is one of the best things about being an author, but it is easy to become distracted. My office sits in between the living area and the front door and is often used as a shortcut. I’ve grown used to it and have learnt to write under almost any condition. The only time I can’t write is when I’m cold.

After I’ve checked my emails I write in spurts. Lately, since reading Sue Lawson’s post, I’ve been writing in 40 minute spurts which works very well for me. Then I get up and move around, make a cup of tea or take the dog for a walk or put the washing on. Then begin another spurt. It is a good way to discipline oneself.

I start off the day working on my WIP, either writing the story or editing. Then later in the day I move onto other more mundane matters like posts for my website or interviews etc.

My writing room is a bit of a writing mess, I’m afraid. I can’t seem to keep it tidy. I figure that as long as the space inside my head is tidy that’s all that counts. 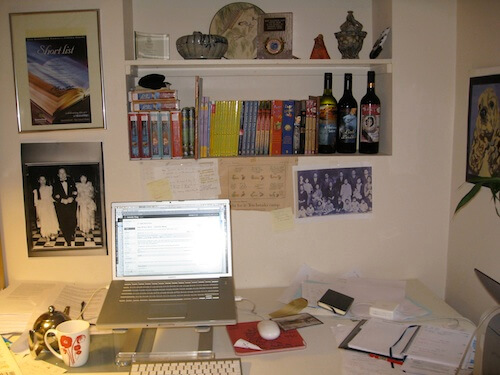 On the shelf above my laptop are all the books I have written and their various editions. The three bottles of wine on the right are gifts from Penguin with the book cover as wine labels. It is such a lovely, thoughtful idea.

On the wall on the top left is the Shortlist certificate for the Queensland Premier’s Awards and below that a picture that appeared in the newspaper in the 1970s, I think. My sister, Lisa and I are escorting my father to the Lord Mayor’s Ball.

On the right is an old photo of my mum’s family with my great grandmother sitting in amongst her children and grandchildren. I have fictionalised her in Poppy and the Thief, the third book in the Poppy series. And there on to the far right is a beautiful painting from one of my young readers. She sent it to me because she knows I love cocker spaniels.

The poppy cup on my table is a gift from my wonderful writer friend, Corinne Fenton to celebrate the birth of the Poppy series.

I don’t have much of a view out my window so I have set up a bird bath under the camellia trees. 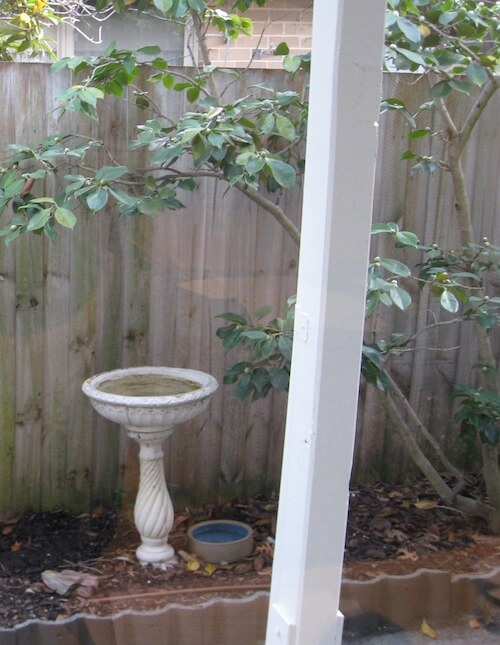 I am always happy to be distracted by nature and love the sound of birds having fun in the bath. This fluffy guy is one of my very satisfied customers. 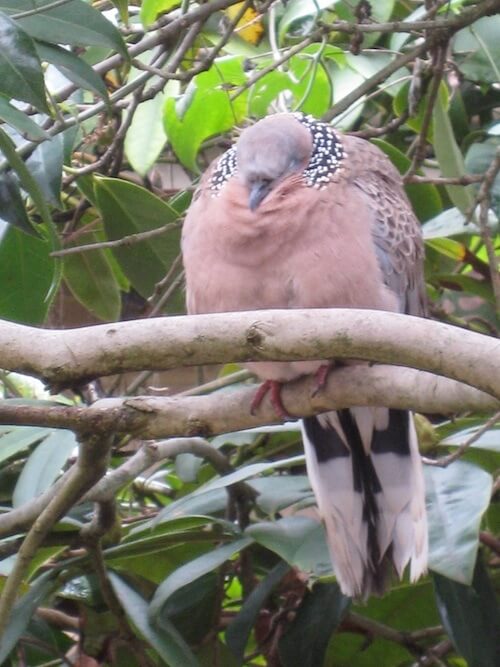 My latest book or WIP

My latest book is Poppy at Summerhill which is published tomorrow, May 2. It is the second in the Poppy series with two more to come out over the year. I’ve finished book 3 but am still working on book 4.

I am working on a new novel called The Wish Bird which will be published by Penguin in 2012.