Australian childrens and YA author Cath Crowley talks about her writing process.

I took a risk and quit my full-time teaching job in 2000 and enrolled in the Professional Writing and Editing course at RMIT.

I studied a range of subjects, and Writing for Young Adults was one of them. I didnt have a mentor, but I did have some wonderful teachers who encouraged me to send my work off for publication. I began to have short works published in magazines and anthologies and the Age. Sally Heath was the editor of what was then the A2, and she was my first experience of a great editor. I learnt a lot from her suggestions.

I finished The Life and Times of Gracie Faltrain in about 2002, and I began sending it off to publishers. I cant remember how many times it was rejected. A lot. I was feeling a bit discouraged and then I went to Sydney to interview Markus Zusak about The Messenger and he talked about his writing and it inspired me so I kept trying.

I sent my manuscript to Anna McFarlane at Pan Macmillan, and on Easter Thursday she emailed me an acceptance. Gracie came out in 2004, so it must have taken about six months to a year to have it accepted. I was really lucky.

It takes me a long time to get an idea, and even longer to map my characters. That process is a mix of writing and rewriting in different voices to see what works. I make up journals for the characters and I rewrite the voices until they seem right.

After that I start the book. Usually I write for about a month before I realise I have it all wrong. I go back and rewrite. This part is messy but I find that theres no other way for me. Eventually I have the whole thing mapped out in my head and I can hear the characters. I love the part that comes after this.

Im sure about the story and it goes onto the page pretty easily. I start writing at about four or five in the morning and I keep going as long as I can, which is usually until one in the afternoon. I have a break and go for a walk and if I have an idea while Im out Ill come back and write some more.

A picture of your writing space?

There are books everywhere. (I think its best not to show you a picture.)

Near my computer is a little bird statue, which I like to look at when Im stuck for words.

My latest book is Graffiti Moon. This is taken from the Pan Macmillan teaching notes. If I summarise it I go for far too long.

Graffiti Moon is the story of the last day and night of Year 12. Lucy is searching for Shadow, a mysterious graffiti artist. The narrative traces the adventures of Lucy, Daisy, Jazz, Ed, Leo and Dylan over one hot night.

Im working on a book that will be called either The Howling Boy or The Velvet Highway. I cant decide.

I do know that Crow and Audrey narrate the story. They go looking for Audreys lost brother in a world thats strange and beautiful and new for Audrey. Its a mystery and a love story. 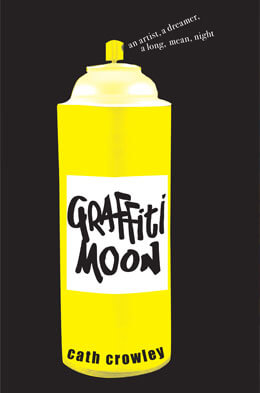