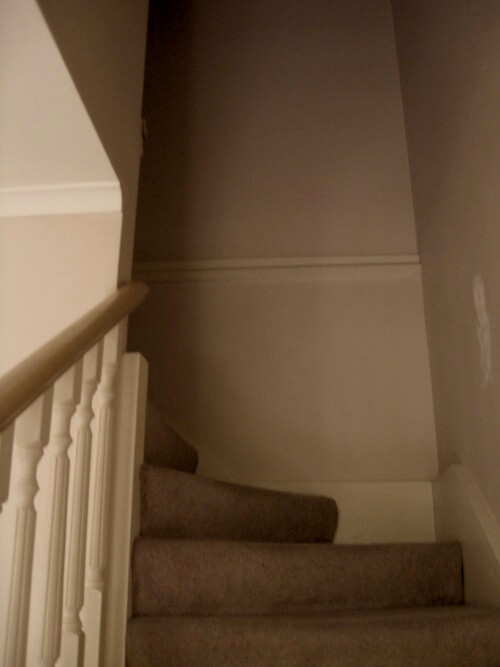 I am writing a short story – a ghostly short story for an anthology for Penguin. Its working title is ‘The Thing At the Window’. Yesterday was the perfect morning to begin work. Everyone had left the house – husband, son, daughter. I was deliciously alone.

I reread what I had done the day before, making small edits along the way. I included notes I had made from the notebook I keep in my handbag. My dentist appointment that week proved extremely fruitful for ideas. I was happy. The sun was shining. Hours of blissful writing lay ahead of me.

I had come to a particularly creepy place in the story and I felt a coldness in the space between my shoulder blades. As if someone had put an icepack to it. But I don’t mind this. If I’m creeped out by what I’m writing, hopefully my readers will be too.

Suddenly there was a loud creak from upstairs that brought me back to reality. The floorboards in my son Ren’s room are loose and creak when he’s moving around up there. But he was not at home. Nobody was at home. Then I thought it must be the tiles expanding in the sun. That’s the logical answer. I went back to work.

A minute later, another creak, then another as if someone was in his room. I walked out of my writing room into the hallway and looked up the stairs.

Nine years ago a friend did a fengshui reading on our house. We bought various crystals which she placed in all the rooms and rearranged some of the furniture. At the same time I mentioned that Ren thought there was a ghost in his bedroom. When I said goodnight to him, part of the ritual was to check the cupboard doors to make sure they were securely shut. But often in the morning they would be open again. I would also find his light switched on in the middle of the night. I asked my friend to look into that matter as well.

She went upstairs alone, stayed there for about fifteen minutes then came down again. ‘There was a ghost in his room,’ she said. ‘She was a lady who cared for Ren a great deal but she’s gone now. I told her to go. That she wasn’t needed anymore.’

I was shocked and creeped out by this. Imagine a ghost lady hovering over your child. It is, I don’t know … kind of sad and tragic and horrifying. Strangely enough, after clearing the house of this supposed ghost, the cupboard doors never again opened by themselves and the overhead light stayed off all night.

And as far as the fengshui went, from that day on my career as a published author flourished. So yes, I do believe in fengshui and am quite superstitious.

I hadn’t thought about that ghost in my son’s room until yesterday while I was standing on the stairs ready to investigate. I certainly would not have been so brave if it had been dark. I would have fled the house. Then reason got the better of me. Of course, I thought to myself, it’s the carpenter climbing around the roof looking at the gables that need mending. He said he would come over in the next few days.

I walked the rest of the way up the stairs. I would look out my bedroom window. I’d be able to see his truck from there.

The first room off the small hallway is Ren’s room. His door was closed as so often it is, to hide away the mess. The next is my daughter’s room and at the end of the hall is our room. I was about to enter our bedroom when I happened to glance over my shoulder. That’s when I froze. My son’s door was now standing wide open when only a moment ago it had been shut!

Someone or something was in the house!